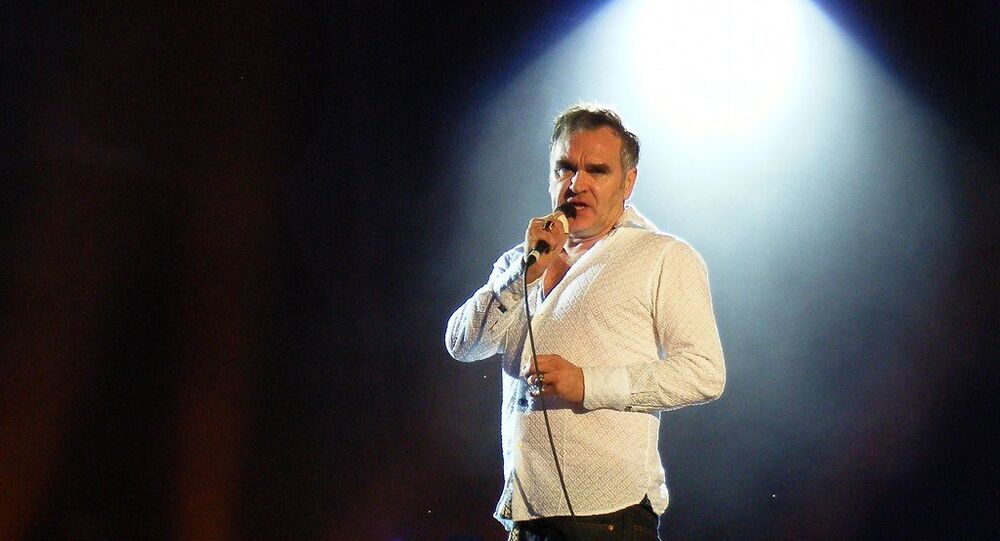 Morrissey has sparked controversy on multiple occasions recently, with the Smiths frontman sporting a right-wing anti-immigrant For Britain badge in a fresh incident during an appearance on The Tonight Show Starring Jimmy Fallon, as well as a series of live shows in New York.

Morrissey has responded to reports that Merseyrail had removed posters promoting his new album “California Son” in wake of a complaint by a customer vis-à-vis the singer’s political views. The artist is known to have recently thrown his weight behind For Britain, a controversial political party started by anti-Islam activist Anne-Marie Waters.

Speaking with Music-News.com, the former Smiths singer was asked if he had a message for the Liverpool transit provider and his “regular naysayers”. He responded by saying: “It’s very Third Reich, isn’t it?”

“And it proves how only the feelings of the most narrow-minded can be considered within the British Arts”.

Morrissey went on to say that the public is “not free to debate”, which means “the ultimate rejection of diversity”. “If you ever see Question Time on BBC1 it is always exactly the same panel”, he noted, adding that he has an impression that “we are living through the Age of Stupid” and calling on people to pray that the time soon passes. “I’m only surprised that Mary Whitehouse isn’t on the ten pound note. But, no, I’m not about to go into combat with Mersey Rail”, he summed up, before asking rhetorically:

“Could life get any more mediocre?”

He added that he views his “position in the UK as suddenly so abstract”, sarcastically remarking that the only thing he hasn’t been blamed for so far is the Normandy invasion of 1944. “Give them time, I suppose”, he quipped.

The “Third Reich” reference hasn’t gone unnoticed on the Internet, with one Twitterian further elaborating:

“Stunning lack of self-awareness from Obergruppenfuhrer there”, he said, with others similarly calling out the star singer:

I like to think Michael Palin is to John Cleese as Johnny Marr is to Morrissey. pic.twitter.com/KgloAdYECG

Morrissey needs to take a chill pill with the racism stuff and come to Germany to fight the real fight, which is how much meat these sick freaks eat all day

Many, however, expressed respect for the singer’s position as well as appreciation:

Everyone has as much right to support right wing,left wing,or middle of the road! how dare others try to tell a free man or women who they can vote for!

I still love the Smiths. I respect Morrissey’s opinion. He has a right to his opinions.

" Wrapping himself in the Union Jack"? How is that racist?

Some even argued that art should be taken separately from a doer, causing one to reject the claim:

For most of the fans of Moz, it is just pretty tunes, albeit melancholy af.

Can one no longer separate art from the artist?

Not if the art has an inherent social, philosophical or psychological message. If it's just pretty tunes, yeah.

Earlier this month, the world's oldest record store announced they would no longer stock his albums after Morrissey was spotted wearing the pin of Waters’ right-wing political party.

The singer came up with a message to his fans lashing out at “paranoid” media on MorrisseCentral.com:

“I am sorry the UK print media’s contorted interpretation of who and what I am has gone all wrong. In these days when most people are afraid to even whisper, the print media write as if someone is coming to get them. This aching nervousness brings on the vengeful and paranoid”.

EU Should Engage With Right-Wing Parties After Elections - Italian Diplomat