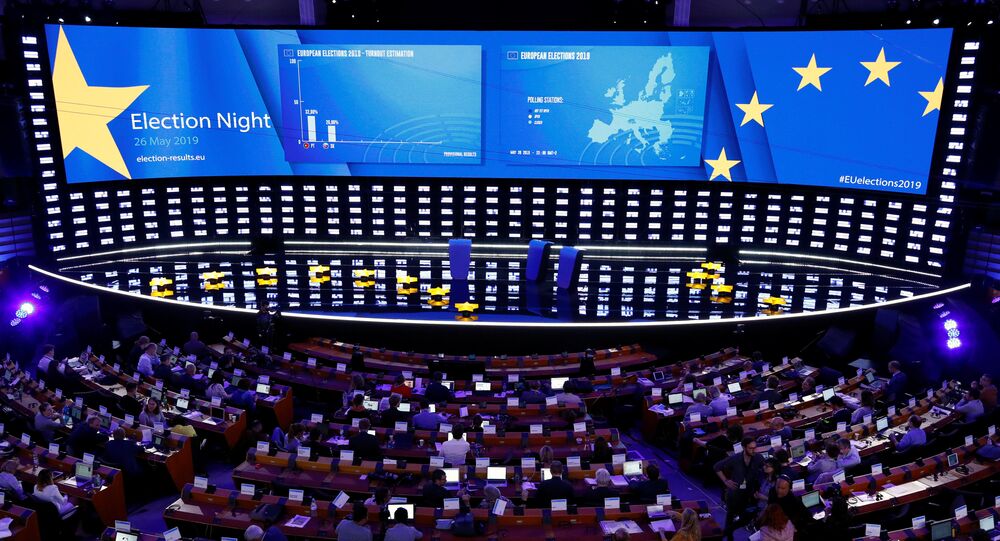 This year's ballot comes at a time when visions for the EU's future are as polarised as ever, with voters in some of the bloc's biggest economies indicating an apparent frustration with the European Union as it stands today.

The 2019 election to the European Parliament was seen as a test for the popularity of the liberal democratic powerbrokers and the dawning "New Right".

France's Emmanuel Macron, one of the principal champions of the EU project, called it the most important election in the European Union in four decades, citing an "existential threat" to the bloc.

The projected results seem unsettling for the likes of the French president: the two biggest voting blocs in the European Parliament, the centre-right European People's Party and the centre-left Socialists and Democrats, are set to lose seats to Eurosceptics and Greens.

The vote documents the rise of the right-wing sentiment from the side-lines to the centre of political discourse in the European Union — and it is noteworthy that it happened in some of the bloc's biggest powers, Italy, and France, and also the United Kingdom.

Farage Can Throw a (Brexit) Party

Anti-EU campaigners are projected to claim a large chunk of UK seats, with the Brexit Party winning just under a third of the vote. Nigel Farage's movement will now have 29 MEPS — twice as much as Labour and the Tories combined.

This marks a major victory for the Brexit Party, which was launched just six weeks ago, and clearly indicates voter anger over draw-out departure from the EU but does not necessarily mean immediate changes on the national political arena.

Nigel Farage is probably aware of that. He is still waiting for the current deadlock to be resolved, but says the election results send a "massive message" to the government.

Farage said the results of the vote reflected a "real sense of frustration" among UK citizens, who felt that the Conservatives "broke their promises".

Indeed, a recent survey indicates that 60 per cent of UK voters felt disenchanted with the political systems both at home and in the EU (the discontent was bigger only in Greece and France).

In line with that sentiment, the Brexit Party dominated the polls in every region of England apart from London, coming first in Wales and second in Scotland (the results from Northern Ireland are expected on Tuesday).

Farage now demands that his party plays a role in Brexit talks and warns that its success could completely reshape British politics if Brexit is not delivered by the 31 October deadline.

The Italian Eurosceptic Five Star Movement (M5S) is set to come third in the just-held election with 17.1 per cent, trailing behind the Social Democrats (22.7 per cent) and Matteo Salvini's Lega (34.3 per cent).

While praising Farage's success in the UK, he heralded the beginning of a new time for the union. "A new Europe is born. I am proud that the League is participating in this new European renaissance," he said in Milan after learning about the exit poll results.

He stated the polls highlighted that Europe was "tired of being a slave" to elites and corporations.

Lega's victory did not come as a surprise, given strong anti-EU sentiment in Italy. According to a European Parliament survey, just 44 per cent of Italians would vote to stay in the EU — the lowest percentage of all member states, including Britain.

This disillusionment helped Lega, which claimed just 6.2 per cent of the vote in the last EU ballot, complete its transformation from a once-fringe Eurosceptic party into a formidable political force.

Salvini, an unapologetic opponent of illegal immigration into Italy and the EU, as well as a critic of the EU's handling of asylum seekers, went on to become the most prominent figure of the European "New Right".

He has gone to great lengths to deliver on his main electoral pledge − to stop the influx of illegal arrivals − by closing Italian ports for banning migrant-rescue ships and shutting down a number of migrant reception centres in Italy.

It seems that a big chunk of French voters have grown weary of President Macron, as his centrist La Republique en Marche party is projected to come in second with 22.4 per cent.

Marine Le Pen, who lost to Macron in the 2017 general election, struck back this year, with her National Rally topping the polls with 23.3 per cent. Le Pen almost managed to replicate the 2014 success, when her party, then called the National Front, was first with 24.85 per cent.

In this election, Macron was widely seen as a champion of globalism and multilateralism; Le Pen, on the other side is known to be an opponent of what she once called European "ultra-liberalism" and "savage globalisation".

Interestingly, Macron's popularity plummeted in the wake of his inability to calm down the Yellow Vest movement, which protests against poverty and social burdens and is not associated with a conservative agenda.

There is one important thing that distinguishes her policy from that of UK winners, however. Unlike die-hard Brexiteer Nigel Farage, Marine Le Pen, who had earlier called for a 'Frexit', has abandoned her plans for departing the EU in view of turmoil across the English Channel and now suggests transforming the EU into an association where each nation-state would retain more sovereignty.

It falls in line with results of recent surveys, which showed that most French voters were among those most disillusioned with the EU, but were opposed to pulling out of the bloc.

What's in the East?

Although Marine Le Pen and her father, as well as Nigel Farage, have been on the horizon for quite a while, it is the emergence of nationalist politicians and parties in smaller countries of Central and Eastern Europe that prompted Brussels to sound the alarm.

Perhaps the most vivid supporting examples can be found in Poland and Hungary, where the ruling right-wing parties are seen as scoring big wins.

The Fidesz party of nationalist Prime Minister Viktor Orban could secure a landslide victory with 56 per cent of the vote, Hungarian exit polls say. Orban has come to grips with liberal democratic MEPs and European Council President Donald Tusk in particular over an apparent clash of values.

The PM has come to be known as one of the staunchest anti-immigration advocates in Europe and has fiercely opposed the idea of accepting refugees from other European countries under migrant resettlement schemes proposed by the European Union, winning praise from Matteo Salvini.

A Hungarian scenario is likely to unfold in Poland, where the ruling right-wing Law and Justice Party is expected to claim over 45 per cent of the vote. This result is seen as popular approval of the Eurosceptic government, which has good electoral prospects

Poland, where its 15-year anniversary of EU membership was marked by nationalist rallies, is facing a growing gap with Brussels.

Hungary's Orban this year suggested that Warsaw could form an anti-immigration alliance with Rome to work within the European Parliament. Now, it seems, the prospects for such a chorus in Europe are more foreseeable and likely than ever.