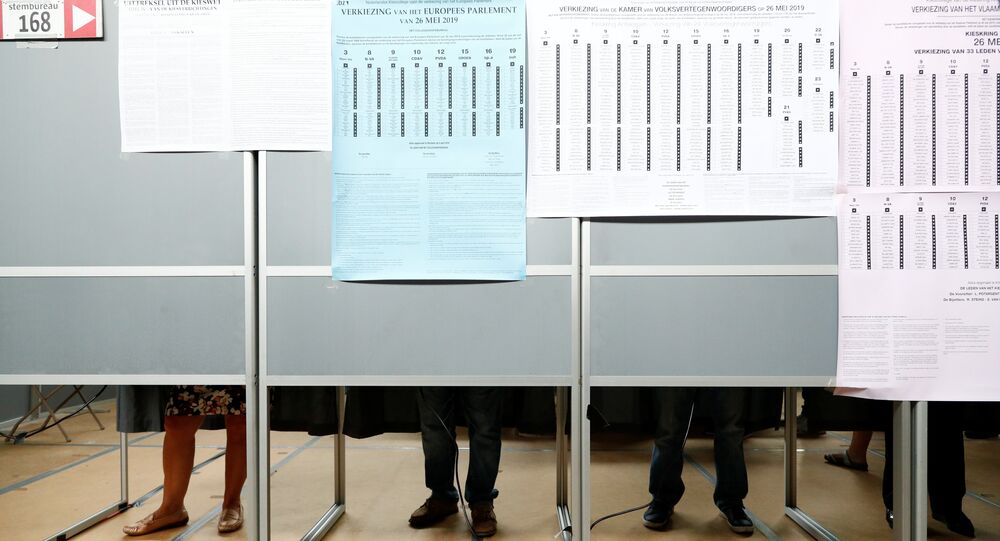 BRUSSELS (Sputnik) - The European People's Party (EPP) and Progressive Alliance of Socialists and Democrats (S&D), which have been setting the tone for the EU's policy for years, lost 75 seats in last week's elections and won't be able to form their grand coalition this year, while liberals, the Greens and eurosceptics came out the main winners.

The elections to the European Parliament were held across the bloc from May 23-26, with the turnout coming out to almost 51 percent, the highest since 1994.

How Things Stand In New Parliament

The EPP group, which includes the Austrian People's Party, whose leader, Chancellor Sebastian Kurz, is facing a no-confidence vote at home, and Germany's Christian Democratic Union (CDU), formerly led by Chancellor Angela Merkel, remain the largest faction in the European Parliament with 182 seats, despite losing 35 mandates.

The pro-European Alliance of Liberals and Democrats for Europe (ALDE) group came in third with 109 seats, gaining 41 mandates since 2014, while the Greens/European Free Alliance became the fourth largest political faction, winning 69 seats, which is 17 mandates more that in the previous convocation.

The two major euroskeptic blocs, Europe of Nations and Freedom (ENF) and Europe of Freedom and Direct Democracy (EFDD), won a combined total of 112 mandates, which could potentially make them the third largest faction in the legislature. However, the two groups remain separate, and it is yet unclear whether they will cooperate.

The ENF, which was formed in 2015, and includes such major anti-immigrant and nationalist parties as France's National Rally, led by Marine Le Pen, and Italy's Lega, headed by Deputy Prime Minister Matteo Salvini, jumped 22 seats to win 58.

The EFDD, comprising Italy's Five Star Movement and the recently formed UK Brexit Party, which surpassed all major political parties at the national level by a double-digit margin, secured 54 mandates, gaining an additional 13 seats from the last election.

However, the euroskeptics are likely to eventually lose part of their mandates after the United Kingdom withdraws from the bloc since lawmakers from that country will no longer have the ability to participate in decision-making processes in the European Parliament.

According to the preliminary results for France, Le Pen's National Rally is leading with 23.3 percent of the vote, followed by President Emmanuel Macron's En Marche! with 22.4 percent.

© AFP 2019 / MLADEN ANTONOV
Socialist Party Wins European Elections in Portugal - Internal Administration Ministry
Salvini's Lega, in turn, has a more comfortable lead in Italy, winning 34.3 percent of the vote, which is an over 11-point lead over the closest runner-up, the Democratic Party.

Hungary's nationalist Fidesz–KDNP Party Alliance, co-led by Prime Minister Viktor Orban, who is known to be one of the fiercest anti-immigration advocates in Europe, has secured a landslide victory with 52.3 percent, beating the Democratic Coalition by an over 36-point margin.

As things stand, the EPP and the S&D, which have been dominating the European parliament in recent years, are currently falling short of the 376-mandate threshold required to form a majority coalition in the 751-seat legislature.

The two political forces will now have to look for support from other factions. EPP leader Manfred Weber has already said that he is ready to cooperate with pro-European forces but not with euroskeptics.

"For me, as lead candidate of the EPP [for the post of the head of the European Commission], one thing, one message is crystal clear: we will not work together with those who do not believe in Europe, with those who want to destroy Europe. The Europe of today is our Europe, it is Europe of EPP… and we will defend this Europe against the nationalists", Weber said at a press conference late on Sunday.

© AP Photo / Francisco Seco
European Commission Holds Weekly Press Conference Day After EU Parl't Election
The potential alliances within a majority coalition will have a direct impact on the election of the new head of the European Commission. The vote will be one of the first things that the incoming parliament must do.

The candidate for the post is first elected by the European Council and then has to be approved by an absolute majority of parliamentarians.

For the 2014 elections, however, the European Union introduced a new system, under which European parties put forward their "lead candidates" for the post, and the faction that gained the largest number of seats in the legislature ultimately had its candidate appointed. The process has received widespread criticism, and it is yet unclear whether the 2014 system will be used this time.  The most recent EU summit showed that about 11 member states were skeptical about the system, a position that may jeopardize Weber's chances of being elected president.

Weber, one of the proponents of sanctions on Russia and critics of the Nord Stream 2 pipeline project, has voiced his support for the lead candidate system and said he wished that it would be used in 2019 as well.

It is unclear whether the ALDE will support Weber's nomination if the president of the European Commission is elected under the lead candidate system. The Greens have not showed much of support for Weber either, saying that they would make their decision based on the candidates' programs.