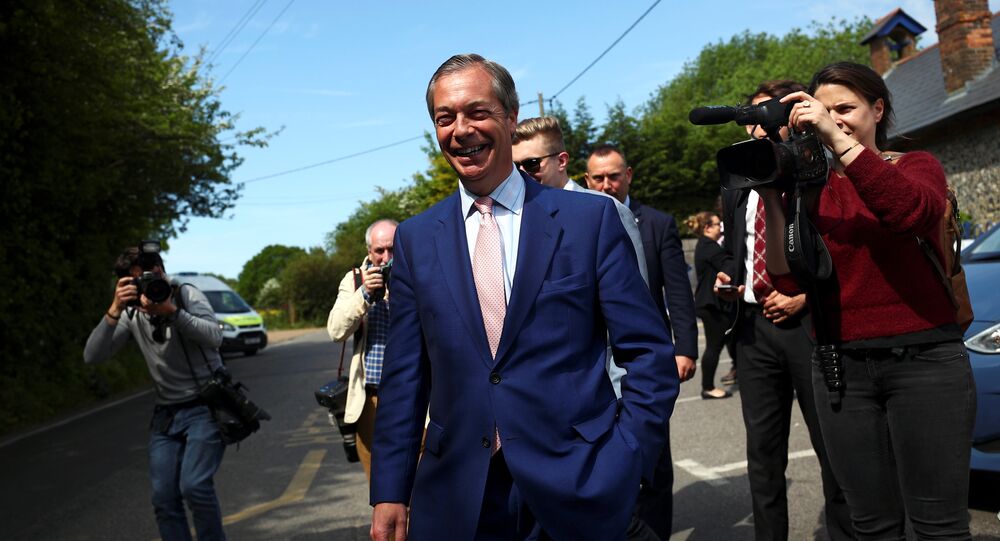 The UK Voted for Brexit Again: Highlights of EU Vote

With preliminary results showing significant success for right-wing parties in the elections to the European Parliament, Sputnik highlights five key takeaways of the election process in the UK, which is still bracing itself for its withdrawal from the EU.

Despite the ongoing political turmoil in the UK following Prime Minister Theresa May’s announcement to step down as PM in June, Britons seem to have confirmed their drive for the UK's withdrawal from the EU, given Nigel Farage’s Brexit Party's success in the European elections.

According to preliminary results, Nigel Farage’s newly formed Brexit Party has managed to obtain about 31.7 per cent of the vote and 29 seats, snatching votes from the Conservatives and the Labour Party.

The Brexit Party received the majority of votes in the country's northeast, east and in Wales, including Cardiff, which is traditionally Labour territory.

The results indicate the Brexit Party surpassed the United Kingdom Independence Party's (UKIP) performance in 2014, when the party, led by Farage at the time, gained 27.5 per cent of the vote.

In February, Farage registered the Brexit Party after he left UKIP in late December over disagreements with the party's approach and policies. In April, he said that he would use the European elections as a launch pad for his party to fight for changes in the UK political system, which failed to deliver the country's exit from the EU.

The Liberal Democrats came second with 20.3 per cent of the vote, winning 16 seats in parliament.

Remarkably, with 27 per cent, the LibDems proved to be the main winners in the European elections in London, gaining three MEPs in the capital. In comparison, the Brexit Party took 18 percent of the vote in the UK capital.

On the whole, UK media described the Lib Dems’ results as a “healthy second-place finish”.

The Labour Party came third, picking up just 14.1 per cent of the vote and 10 seats, in what many described as a disappointing result given that in the last European election the party manage to secure 25.4 per cent.

In London, Labour finished behind the LibDems, while in the country’s north-east it yielded to the Brexit Party, losing 17 percentage points to finish at 19 per cent.

READ MORE: Confident Farage Mocks Theresa May Despite Past of Duplicitous Brexit Vows

Jeremy Corbyn has already pledged that his party would “reflect on these results”, with shadow foreign secretary Emily Thornberry claiming that her party had taken a “kicking” and should promise a referendum and campaign to stop Brexit.

Obtaining about 9.1 per cent of the vote and just four seats, the Conservative Party came fifth behind the Greens, in what is the party’s worst European election result in its 185-year history.

The Conservatives scored eight per cent in London, and obtained 10 per cent and 11 per cent in the eastern region and the West Midlands, respectively.

Except Change UK, all such parties did well in the European elections, with the Greens gaining 12.1 per cent of the vote; in the previous two European votes the party achieve just eight percent.

With a total of 3.4 per cent, the Scottish National Party (SNP) remarkably scored 38 per cent in Scotland, well above the 29 per cent it garnered in 2014. All in all, UKIP finished ahead of Change UK, and British media said the results of the 2019 European elections indicate “a crowded field of anti-Brexit parties”.