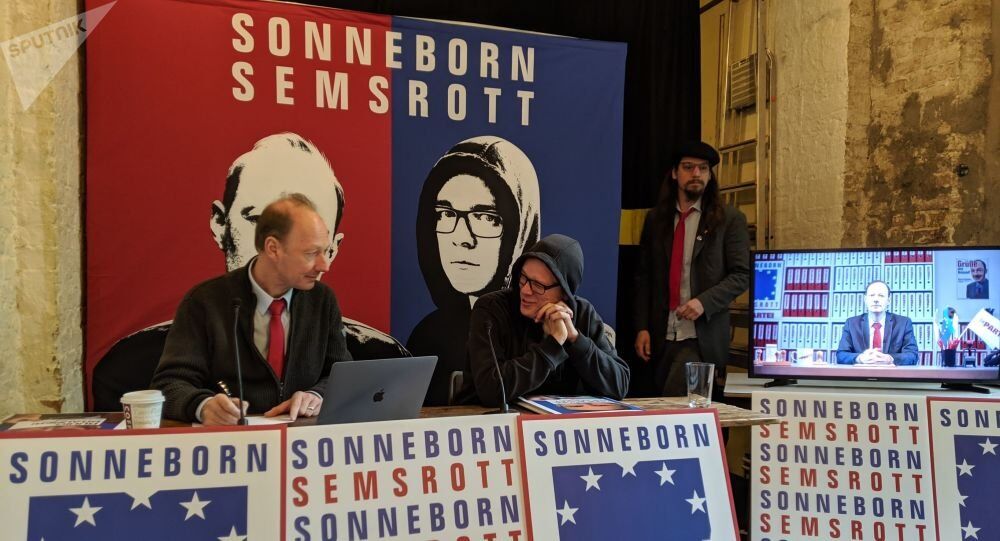 Germany has 96 MEPs in the European Parliament and at the last election in 2014 Die Partei (The Party) won a single seat. Sputnik looks at what it stands for and why it has caused a stir this time around.

Germany's satirical party Die Partei formed in 2004 by Martin Sonneborn is fielding several candidates in the European elections on Sunday (26 May) who share the surnames of key figures in Adolf Hitler's Nazi regime.

One of its leaflets says Kevin Goebbels, Fabian Hess and Tobias Speer are on its list of candidates for the election — names which echo Nazi propaganda chief Joseph Goebbels, Hitler's former right-hand man Rudolph Hess and the regime's chief architect Albert Speer.

Other candidates share the same surnames as Hitler's secretary Martin Bormann and Adolf Eichmann — who was executed in Israel for crimes committed during the holocaust.

But the Nazi namesakes gag has gone too far for many in Germany.

Alexander Graf Lambsdorff, a candidate for the liberal FDP, told the RND media network: "What we are seeing here is a swastika being smeared onto the ballot paper. Sonneborn wants the provocation, he wants the misunderstanding."

Karin Prien, Schleswig-Holstein state's minister for education, science and culture as well as a speaker for the CDU party's Jewish Forum, said: "To claim that one wants to fight right-wing populists in this way is either naive, a lie or at least not very intelligent."

However, most Germans have taken the Nazi namesake candidates as just a joke, the latest in a series of satirical stunts made by Die Partei and its founder Martin Sonneborn, a former editor of the German satirical magazine Titanic.

He formed it with a light-hearted political agenda which pokes fun at Germany's main parties and the big issues.

[Facebook post: "My dear friends and friends, I have to leave you unfortunately, Europe needs me. Please keep your fingers crossed for this delicate mission! I hope we'll see you again soon. Bye!"]

Sonneborn is hoping to get himself and comedians Nico Semsrott and Lisa Bombe elected as MEPs and the latest polls has Die Partei on three percent, which would be enough to send the three of them to Brussels.

​In an interview with Sputnik's Bolle Selke, Sonneborn said: "I have interesting ideas for this continent. We could make it more peaceful, social and environmentally friendly. I just have to come to power."

Y'all there is something not quite right about the list of candidates for @DiePARTEI for the Europawahl. Can't seem to put my finger on it. 🤔

​The name is also a reference to the Socialist Unity Party that ruled East Germany and was always referred to simply as Die Partei.

Among Die Partei's campaign promises this time round are to "Make Germany Two Again" — reversing the 1990 reunification — and to punish climate change deniers by confiscating their driver's licenses.

At the last election the conservative CDU and their Bavarian allies in the CSU won 34 seats, the social democrat SPD won 27, the Greens won 11 and AfD and Die Linke (The Left) won seven seats each.