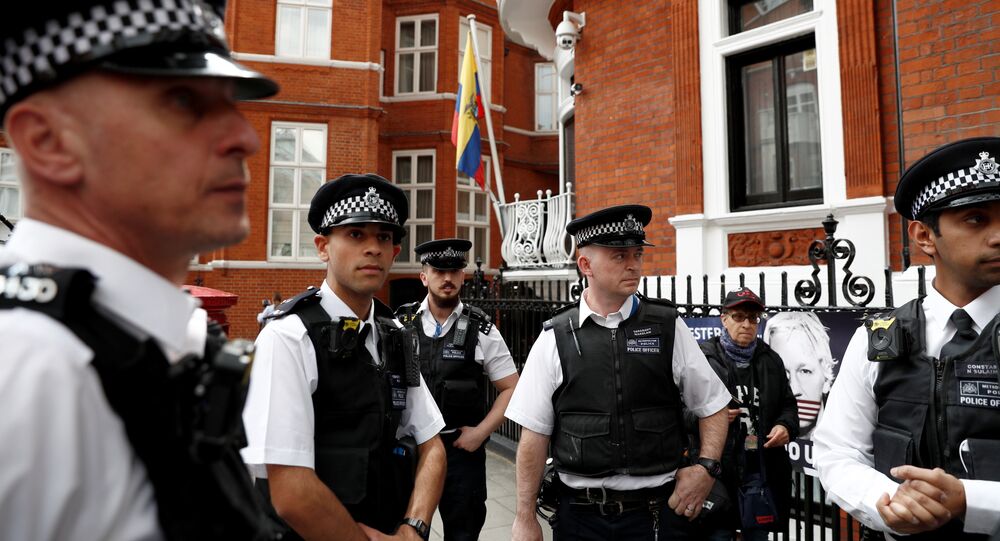 MOSCOW (Sputnik) - The Ecuadorian authorities, by giving US prosecutors permission to confiscate Julian Assange’s documents at the Ecuadorian embassy in London later on Monday, are violating the law on asylum as well as the right to maintain medical and legal confidentiality, a statement issued by the legal team of the WikiLeaks founder said.

According to WikiLeaks, Assange's belongings from his time living at the embassy will be handed over to US prosecutors later in the day.

The statement further noted that Ecuador also did not allow UN representatives, Assange himself or representatives of his legal team to be present during the search of the premises.

© AFP 2020 / Daniel LEAL-OLIVAS
Julian Assange's Belongings Handed to US Prosecutors - WikiLeaks
Materials subject to confiscation include two of Assange’s manuscripts, legal papers, medical records and electronic equipment. As such, not only is Assange's right to legal and medical confidentiality violated but also the standards for press protection.

The lawyers also said that the search and seizure had been designated by the Ecuadorian authorities as "International Assistance in Criminal matters 376-2018-WTT requested by the authorities of the United States of America." The reference number of the document suggests that that the countries have been working together on this issue since last year.

The statement also said that the UN Special Rapporteur on the right to privacy, Joe Cannataci, asked Ecuador to allow him to monitor the search and seizure. Ecuador rejected his request without explanation, despite the fact that Ecuador committed itself in 2003 to granting open invitations for UN rapporteurs to investigate any aspect of their mandate in the Latin American country.

"In the face of countless abuses, and acting on provisions in domestic legislation and international human rights instruments, the defence has challenged the execution of this measure. All applications have been rejected," Assange’s Ecuadorian lawyer Carlos Poveda said.

Aitor Martinez, the representative of Assange’s defense team, said that these actions were "unprecedented in the the history of asylum."

"Ecuador is committing a flagrant violation of the most basic norms of the institution of asylum by handing over all the asylee's personal belongings indiscriminately to the country that he was being protected from — the United States," Martinez noted.

In turn, WikiLeaks Editor-in-Chief Kristinn Hrafnsson called the upcoming search on May 20 "a puppet show."

"The [US President Donald] Trump Administration is inducing its allies to behave like it's the Wild West," he added.

© REUTERS / Peter Nicholls
Assange's Ex-Guarantor Duchess of Beaufort Says to Continue Supporting Him
Assange, who was convicted of sexual harassment and rape in Sweden in 2010, has been hiding in the Ecuadorian embassy since June 2012 to avoid extradition to the Scandinavian country. He was arrested on Swedish and US warrants on April 11, 2019, and the court in London found him guilty of breaching his bail conditions that same day.

On May 2, the UK court gave the United States 65 days to provide a juridical basis for Assange’s extradition.

According to the US Justice Department, Assange is accused of computer hacking in the United States. The country sent the United Kingdom the warrant for the detention and extradition of the WikiLeaks founder in December 2018. On May 1, the court in London sentenced Assange to 50 weeks in prison for violating the terms of his bail.