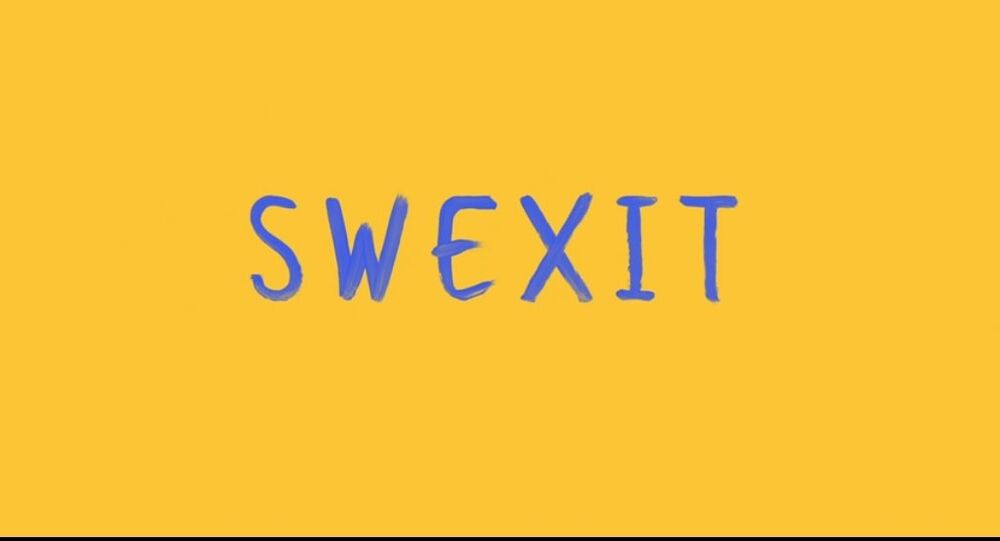 The ad features the word 'Swexit' and had been expected to reach over two and a half million viewers. The right-wing Alternative for Sweden party has called this "the most meddling so far" in the EU election.

The Swedish state channel TV4 has stopped the right-wing Alternative for Sweden's party ad in the run-up to the EU election.

The short 15 seconds long ad features the word Swexit spelled out in blue letters on a yellow background, Sweden's national colours, narrated by a kid's voice.

Alternative for Sweden (AfS) held talks with TV4 already in April. The party wanted to have its ad aired during week 21 until the election day on 26 May, and was admittedly waiting for the final confirmation.

However, the state television opted out of the deal, offering now explanation, according to the AfS.

"TV4 poses a threat to freedom of expression and democracy. The biggest influencing operation in this election comes from TV4. They are the only channel in Sweden that can broadcast political advertising, and now they prohibit advertising from the only party that drives the issue of EU withdrawal. There is a large group of EU opponents in Sweden, and TV4 does not want us as a party to reach out to them. Obviously, this affects the election results in a crucial way", AfS leader Gustav Kasselstrand said.

According to the AfS, the decision violates TV4's own rules that state that all parties are offered equal advertising conditions in opinion advertising in the context of the 2019 EU election.

The AfS also published its e-mail correspondence with TV4, with the channel conspicuously refusing to justify its negative decision.

"Unbelievable. Had the opposition in Hungary, Poland or Russia had been completely shut down from advertising in the middle of a crucial election campaign, it would have been a major news in Sweden and spurred gossip about the lack of democracy and calls for sanctions", AfS politician Erik Almqvist wrote on Facebook.

"Good! More publicity for AfS! More people are understanding why the party is needed in this 'democratoship' called Sweden", a user tweeted in support of AfS.

In another ad, AfS calls Sweden's EU membership a "catastrophe", which cost the country half a trillion kronor ($51 billion).

"Each year, we send SEK 40 billion [$4,1 billion] from Sweden to Brussels", AfS said, accusing the Swedish politicians of having tacitly signed agreement after agreement ceding power from the people of Sweden to foreign politicians and lobbyists.

The Alternative for Sweden is a new Swedish party founded in 2018 by mavericks from the Sweden Democrats, a fellow right-wing party they considered not radical enough to their taste. The AfS is highly critical of multiculturalism and has repeatedly pledged mass deportations of migrants, explicitly saying that "hundreds of thousands will have to go".

As of today, the AfS is the only right-wing party supporting the idea of Sweden leaving the EU. The Sweden Democrats, which had long been pushing for a Swexit, changed their stance in 2019, instead hoping to change the institution from within.