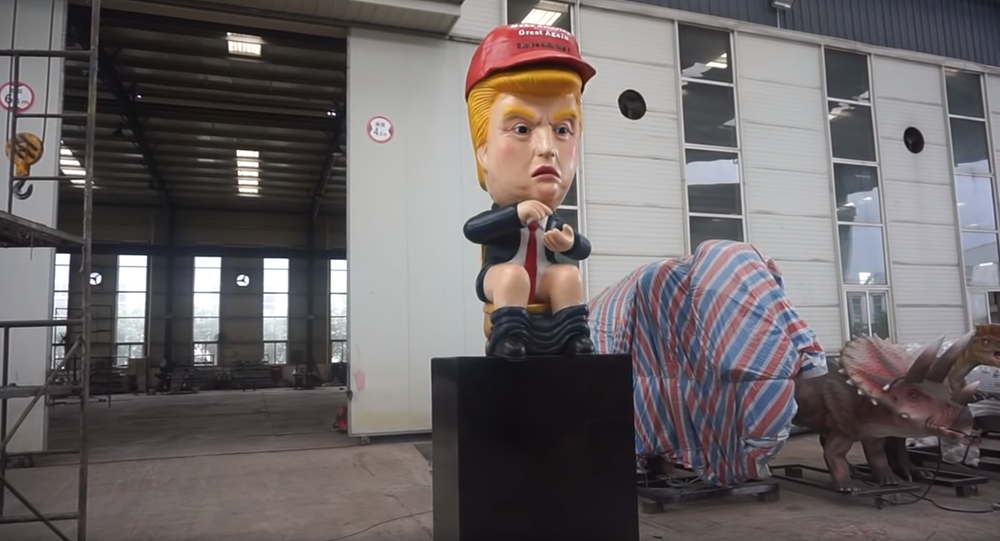 Move over Trump baby balloon, because there will be a new protest piece in London this year!

Ahead of US President Donald Trump's 2019 trip to the UK in June, author, "dinosaur explorer" and proud Trump critic "Dino" Don Lessem commissioned an anti-Trump statue inspired by the 2018 Trump baby blimp that was seen around the world amid the London protests over the president's state visit that year.

Lessem, the owner of website TheDumpTrumpDump.com and author of "Who Said It: Trump Or This Other Schmuck?" is bringing his vision to life for a whopping $25,000, according to his GoFundMe page, which has been active since April 3.

The statue is expected to be completed and shipped from China (apropos, really) to the UK in time for Trump's visit to Britain in early June.

Donning a "Make America Great Again" hat with an "Impeach Me!" command added directly beneath the slogan, the 16-foot Trump statue presents the US president as a big-headed, gold toilet-sitting, Twitter-focused fart machine with a limited vocabulary and fixed frown.

With the creator of the statue probably wanting to keep it PG and not rely on Stormy Daniels' account of Trump's anatomy, Lessem told Daily Kos that "for [Trump's] own safety, we thought to put his overlong tie into the toilet itself."

Soundbites of well-known Trump phrases such as "no collusion," "witch hunt" and "you are fake news" can be heard from the statue when the president is not passing gas on his golden throne.

"By the way, it being China where it was made, the factory owner asked me, ‘Can you really do this without going to prison?' ‘Answer cloudy, ask again later,' I told him," Lessem revealed to Daily Kos.

Trump's upcoming state visit to the UK has already ruffled some British feathers, particularly those of UK Labour leader Jeremy Corbyn, who had quite the mouthful for the US commander in chief.

"Theresa May should not be rolling out the red carpet for a state visit to honour a president who rips up vital international treaties, backs climate change denial and uses racist and misogynist rhetoric," Corbyn said, as reported by Sputnik last month.

This certainly is not the first instance of someone using their artistic ability or vision to protest Trump. Since 45 has taken office, pieces protesting the US president with his own likeness have included, but are not limited to: a statue for New York dogs to relieve themselves on, a naked San Francisco statue (complete with a micropenis), the ever-popular Trump baby blimp and even a god-like emperor float at Italy's annual Viareggio Carnevale parade this year that showed The Donald wielding a Twitter sword.