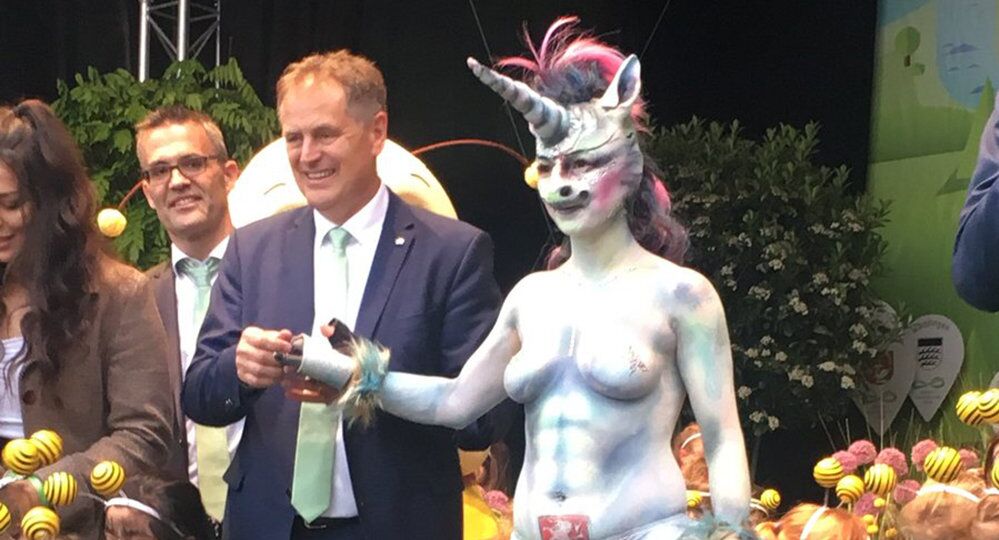 A festival in the southern German state of Baden-Wuerttemberg entered the national spotlight and prompted heated debate online after a local left-wing town councillor decided to pay tribute to the local mascot, a unicorn, and graced the show wearing only knickers, body paint, and a fake horn.

Town Councillor Cynthia Schneider, representing the left-wing party Die Linke in Schwaebisch Gmuend, stole the show when she attended a garden festival in southern Germany almost naked. The woman, in her thirties, appeared on stage during the opening ceremony along with the head of Baden-Wuerttemberg state wearing only a unicorn mask and panties, with the whole body painted silver.

The costume, if one might call it so, is a tribute to the city’s coat of arms, which features the magical creature. However, the show turned into a nightmare rather than a fairy tale for the woman, as her performance was criticised online.

​One can also advertise one’s town like this. Municipal head Arnold accompanied by a unicorn at the opening of Remstal garden show.

However, many seemed more light-hearted.

Meanwhile in Germany: You are seeing a member of the local city council dressing up as a Unicorn (the local mascot) for the Remstal garden fair.

​Naked politician, I find it cool. Thank you, Merkel!

Schneider revealed to the German outlet Bild that the municipal head had assured her that she could remain incognito, and apparently was not ready for all the attention she got as soon as pictures of her standing in rhinestones and butterflies next to a laughing Prime Minister Winfried Kretschmann emerged online.

Kretschmann also commented on the eccentric performance, noting that one should not lead fundamentalist debates about every event and noted that anyone can rate it as they wish.

"One finds this humorous, another interesting, the next one pop, and someone stupid. We are in a free society”, he noted, adding that children at the show were not impressed by a half-naked bosom, but were fascinated with the character, who was “portrayed in a terrific way".

The city branch of Schneider’s party issued a press release calling the performance “unfortunate and regretful", saying that it was not agreed upon within the party.

Managing director of the show Thorsten Englert told the German media outlet he has nothing against unicorns, but agreed that the way it was presented was not entirely appropriate. However, the incident is said to have by no means spoilt the show, as on the opening weekend alone 100,000 guests visited it.