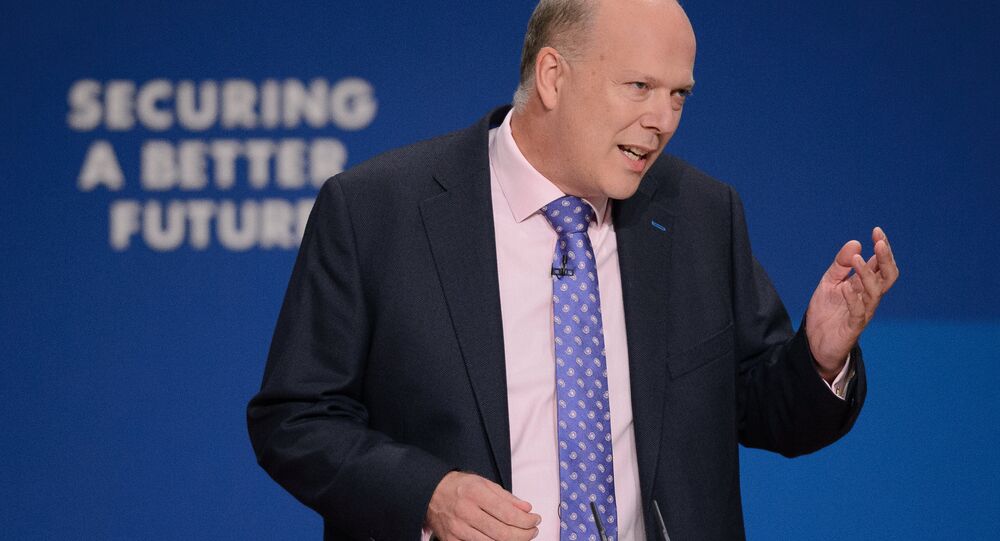 UK transport secretary Chris Grayling delegated the task of monitoring low to medium-risk offenders to private firms in 2014, against the wishes of multiple officials and non-government organisations.

The UK government has decided to renationalise its supervision of criminals following chaos due to a partly-privatised programme which put the public at risk.

The government's Transforming Rehabilitation programme was tasked with reducing expenses and reoffences, but later had to bail out companies and terminate contracts, costing taxpayers over $467m, forcing the Cabinet to cut all Community Rehabilitation Companies (CRC) and pass all monitoring processes to the National Probation Service (NPS).

© AP Photo
Pressure Growing in UK To Scrap HS2 'White Elephant' As Budget Reaches £56 Bln
UK Justice Secretary David Gauke said on Thursday: "Delivering a stronger probation system, which commands the confidence of the courts and better protects the public, is a pillar of our reforms to focus on rehabilitation and cut reoffending."

He added that the UK government would continue to compensate private and voluntary providers, adding that he wanted a "smarter justice system" to reduce repeat offences by "providing robust community alternatives to ineffective short prison sentences."

The new plan is set to begin in 2021 as a transition period for CRC contracts ends by December 2020. But the Ministry of Justice could not calculate the cost of changes or recruitment.

A Public Accounts Committee report accused the government of pushing reforms through at "breakneck speed", which were unable to reduce repeat offences and left services "underfunded, fragile, and lacking the confidence of the courts", with prior reports from the Committee calling the plan "irredeemably flawed".

Reports found that the number of criminals recalled to prison were "skyrocketing" and over 200 offenders under CRC supervision have committed serious offences, including murder. But CRCs were monitoring offenders by phone and failing to assess risks associated with them, in addition to failing to protect victims, inspectors found.

The news comes days after the government watchdog to release its damning report on short prison term offenders and the impacts of CRC supervision on them.

Mr Gauke added that he is pushing to lower the number of repeat offenders jailed under a year, following research indicating that short prison terms were ineffective at stopping repeat offences.

The government has proposed a new model that would mandate NPS control of services, but offer up to £280m a year to private and voluntary groups for their probation work. The plan would also institute 11 probations regions across England and Wales and appoint "innovation partner" responsible for voluntary work, substance misuse programmes, and other rehabilitation programmes.

Britain's Ministry of Justice has mulled holding probation officers accountable to strict standards similar to other regulated professionals such as lawyers.

What Are Officials and NGOs Saying About the Botched Rehab Programme?

Shadow justice secretary for Labour, Richard Burgon, accused the government of putting "public safety at risk" and squandering "hundreds of millions of pounds".

Mr Burgon added that Conservatives did not want to "make this U-turn" and accused them of desperately "trying to re-tender probation contracts to the private sector".

"It is right those plans have been dropped and that offender management is to be brought back in-house," he said.

Revolving Doors Agency CEO Christina Marriott stated it was a good idea to "go back to the drawing board" and called the programme a "failure".

"It has failed to protect the public, failed to stop the cycle of crime and failed especially short sentenced prisoners," Ms Marriot added. "Too many people are leaving prison with no supervision, nowhere to live, and no access to healthcare."

Prison Reform Trust director Peter Dawson said: "Mr Gauke's pragmatism offers hope that the damage done to the probation system by his predecessor can eventually be repaired. Courts are crying out for a simpler system in which they can have confidence.

Ms Cook added: I warmly welcome the plan to reunify probation into a national public service and the aim of promoting confidence in community sentences to replace prison terms of under a year that are known to be counter-productive.

Chief inspector of probation Dame Glenys Stacey said in a press statement: "More than a quarter of a million people are under probation supervision each year, and high-quality probation services can make such a difference to them and to wider society as well.

"Hard-pressed probation professionals now face yet more change, but I anticipate they will be in good heart," she added.