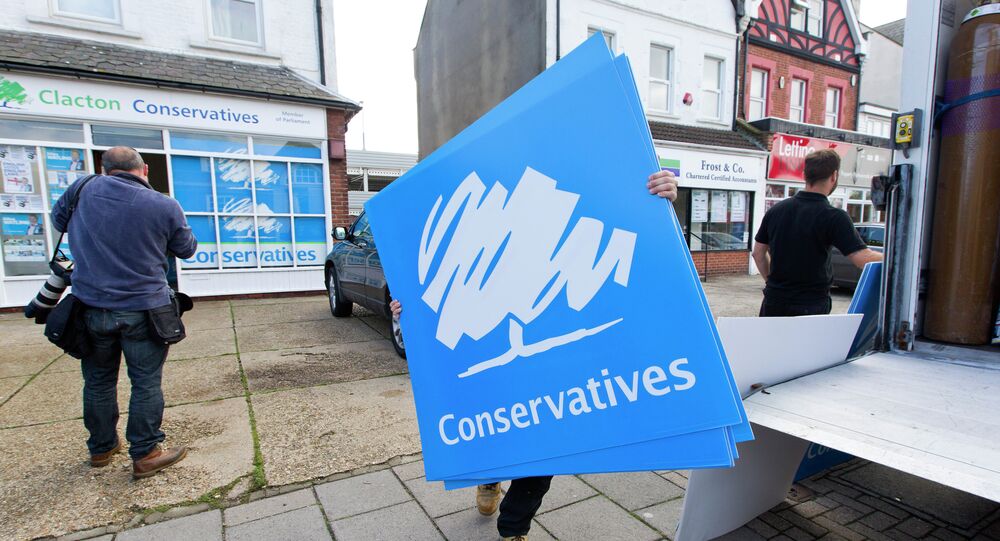 MOSCOW (Sputnik) - Public support for the ruling UK Conservative Party has plummeted to its lowest level in almost two decades, with the party dropping 13 percent in polls in just one month and losing many of its voters to the recently emerged Brexit Party, a poll, carried out for the Evening Standard newspaper, showed on Thursday.

If the general election were held in the United Kingdom right now, only 25 percent of the respondents would vote for the Conservatives, compared to 38 percent in March, which is the party's worst result in 17 years, the outlet reported, citing the results of the poll.

"These numbers should worry the Conservatives greatly. The last time their headline voting intention figures were this bad, they were in opposition and it took them two changes of leader and the best part of a decade to get back into government", Ipsos MORI Research Director Keiran Pedley was quoted as saying by the newspaper.

READ MORE: Tories Split as May Faces Coup Amid Struggle to Pass Brexit Deal Through Parl't

Almost 70 percent of the respondents expressed their dissatisfaction with Prime Minister Theresa May's work, which is her lowest approval rating since taking office, the newspaper added. Moreover, eight out of 10 polled citizens doubted that the prime minister would be able to secure good Brexit deal with the European Union.

© REUTERS / Vincent Kessler
Nigel Farage’s Brexit Party Would Hammer Tories in General Election - New Poll
Meanwhile, the support for the Brexit Party, led by Nigel Farage, skyrocketed from 1 percent in March to 16 percent in May, the poll showed. Around a fifth of voters who supported the Conservatives in the 2017 election have shifted toward Farage's party, the Evening Standard reported.

The poll also showed that 75 percent of people who voted Conservative two years ago, now disapproved of the party's Brexit policy, and 50 percent of them preferred the approach of the Brexit Party.

The survey was carried out by market research company Ipsos MORI among 1,072 UK adults from 10-14 May.

Farage Could End Up in Number 10