We Need to Reinvest Profits in Cleaner, Greener System - Expert

Labour has unveiled detailed plans to nationalise the UK's energy sector in a move it claims will vastly boost the pace and scale of the low-carbon transition. Sputnik spoke on the issue with Cat Hobbs, the director and co-founder of the We Own It Group.

Sputnik: Labour has unveiled detailed plans to nationalise the UK's energy sector in a move it claims will vastly boost the pace and scale of the low-carbon transition. This must be incredibly good news for yourself and your organization. Can you tell us a little bit about these plans and significance behind them?

Cat Hobbs: Yes, it's really exciting news. What this means is that the national grid and the regional distribution companies, the companies which transmit and distribute the energy, the gas and electricity that comes to your homes, these companies have been privatized some time ago and Labour is proposing to bring them into public ownership because what these companies are is essentially a network that we have no choice but to use. It's a profit making network. It's a privatized network, bringing the national grid and these other private companies into public ownership would mean that we could do look for our society so we can reduce your poverty, we reduce our bills, we could tackle the climate emergency investing in the kind of green clean, decentralized energy that we want to see. It's really great news.

Sputnik: If we look at plans to nationalize industries, the majority of Britons want to see the railways be bought back to public ownership but what about energy and utilities? How will these plans go down with the general public do you think?

Cat Hobbs: I think they'll be really popular. We know that 77% of us believe that energy should be in public ownership and I think people can see that it's just a rip off right now. These distribution companies have been extracting profits for shareholders year after year and not only that they've effectively been charging more over and above what Ofgem allows them to charge, so they've had 7.5 billion extra that they weren't actually allowed to take over the past eight years. They're effectively extracting profits every turn. This is a company that could be plowed back into improving our energy system and I think people recognize that it's just an absolute rip-off. 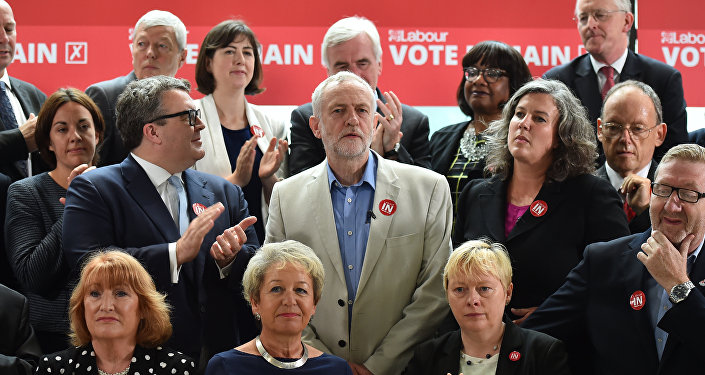 © AFP 2019 / BEN STANSALL
Senior Labour Officials Throw Support Behind 'Confirmatory' Brexit Referendum
Sputnik: If these plans were to go through — this would be one of the biggest shake up's to Britain's energy sector in a long time; naturally some people may be a bit skeptical or concerned about things like changes to tariffs… what would you say to these skeptics about the plans?

Cat Hobbs: I think these plans are really brilliant because they're about tackling the big challenges that we're facing, like climate change by using the resources that we've got like the National Grid. It won't cause any headaches really, apart from investors who own our grid, who are mostly based in all over the world. In Hong Kong and the US and China and Qatar, and investors all over the world are currently profiting from this natural monopoly. We say actually that's not really appropriate. What we need to do is take these profits reinvest them in a cleaner, greener system that works for all of us.

Views and opinions, expressed in the article are those of Cat Hobbs and do not necessarily reflect those of Sputnik.