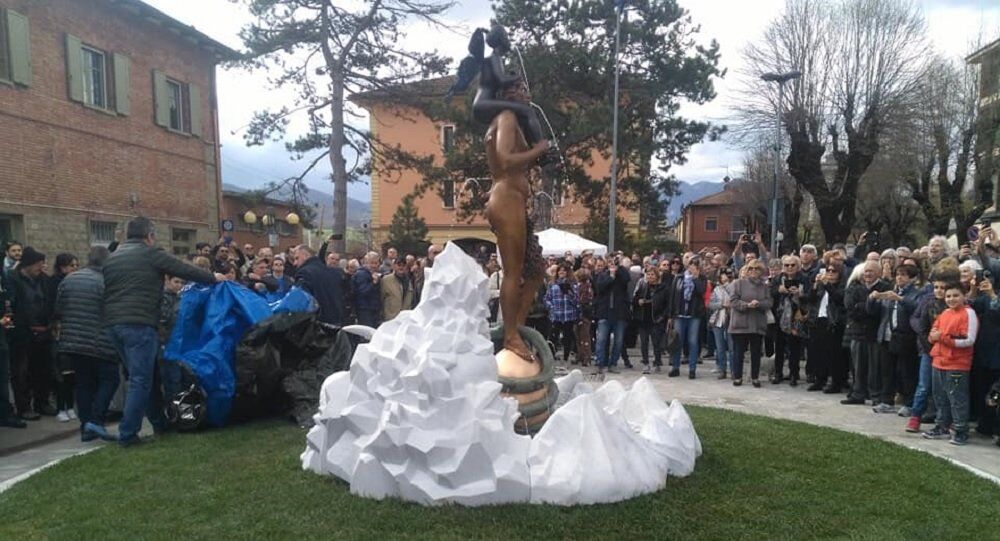 The statue of the half-human mythological god was erected last month in downtown Vergato, about 40 kilometres southwest of Bologna, with the image aiming to symbolise the picturesque Apennines. However, the artwork has been deemed blasphemous by a number of believers, prompting others to rise to the defence of the local artist behind the creation.

An exorcist has been called in to chase demons from a bronze and marble fawn statue in Vergato, near Bologna in Northern Italy, which was made by local painter and sculptor Luigi Ontani, the newspaper La Repubblica reported.

The 76-year-old’s latest work – that of a fawn with horns and an erect penis carrying a boy featuring butterfly wings, has ignited a backlash from a number of political groups and Christians who branded the monument “satanic” as soon as it was set up in front of the train station. Local Northern League MP Simone Pillon depicted the statue as “Satan personified” going on to stress that this “crap” should have been “covered in concrete”.

"It’s an imposing statue of a devil with huge horns and a glaringly erect penis, carrying on his back a boy with butterfly wings, it should be buried in a stream of cement”, Pillon noted.

The statue whose 150,000-euro price tag was covered by public funds and private donations was reportedly smeared with excrement a day after the exorcism was carried out, prompting a police investigation. The attackers left a message saying it was a protest against “your degenerate art and your damned souls” with the note having been signed by “the soldiers of Christ who wish to show their opposition”.

Local media identified the exorcist as David Fabbri, who they said had been previously convicted for printing and distributing pictures of Mussolini.

The statue sporting the famed Roman half-human, half-goat god has caused mixed reactions among the public, with some posting on social media that the fountain, meant to symbolise the snow-covered Appenines with its local mountain “mount Pero” and the flowing water of the nearby Rhine River, is virtually a symbol of paedophilia. Meanwhile, the village’s priest, Don Silvano Manzoni, though acknowledging that the statue is somewhat frightening, argued that branding it demonic would be an exaggeration.

The mayor, Massimo Gnudi, also entered the fray stressing that since the European elections are just around the corner, the whole campaign against the statue could possibly be a political move.

Netizens have also shared opposing attitudes to the fawn sculpture online, with one making a disparaging remark that the person behind it “is called an artist:”

Some rushed to pick up on who sponsored the work:

“The work of the artist Luigi Ontani installed in Vergato, near Bologna, is being discussed: a fawn with a diabolical appearance holds a putto on his shoulders and water gushes from his penis. All paid also by tax payers”, one wrote.

Another butted in sharing his personal impressions:

“My profane judgment is that I don't like it aesthetically, I don't understand this”, he wrote.

"The art studio #MassimoGalleni and the work of Master Luigi #Ontani located in #Vergato stupidly fouled by an uncivilised person or people", another stated.