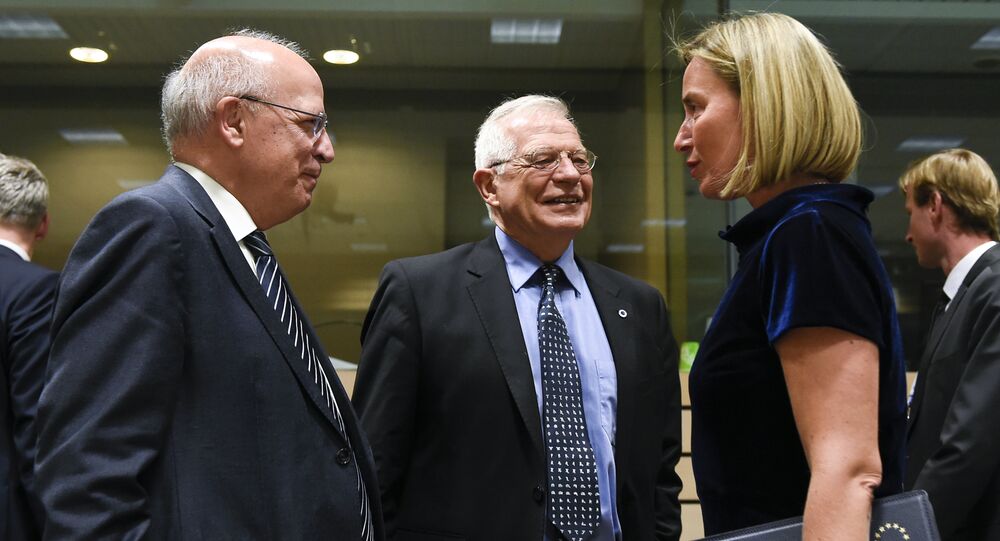 Earlier in the day, it was announced that US Secretary of State Mike Pompeo had cancelled a planned trip to Moscow in order to attend the Brussels summit.

EU foreign ministers have told US Secretary of State Mike Pompeo in Brussels that the responsible course of action on Iran would be avoiding military escalation, Federica Mogherini, the chief of the EU foreign policy, said Monday.

"Mike Pompeo heard that very clearly today from us, not only from myself, but also from other ministers of EU member states, that we are living in a crucial delicate moment, where the most relevant attitude to take, the most responsible attitude to take is, and we believe should be, [that] of maximum restraint and avoiding any escalation on the military side," Mogherini told reporters after a Foreign Affairs Council and a meeting with Pompeo.

© Photo : an official website of the Iranian Presidency office
Russian Foreign Minister: Iran Had the Right to Partially Suspend Nuclear Deal Commitments
The EU foreign policy chief added that she had chaired a meeting earlier in the day which, apart from her, included foreign ministers of France, Germany and the United Kingdom. The steps toward implementing a mechanism for sanctions-safe transactions with Iran were discussed. Mogherini said she hoped for the mechanism to become operational in the next few weeks.

The EU foreign policy chief has continued on by saying that the European Union fears regional escalation in the wake of the Sunday events of Saudi oil tankers suffering an act of sabotage off the coast of the United Arab Emirates (UAE).

"We are still gathering information about that … I confirm my worries about the risks of an escalation in a region that definitely doesn’t need further elements of destabilisation and tensions. So our call is to show maximum restraint from all sides", Mogherini said answering a relevant question.

Foreign ministers of EU member states, as well as the bloc's foreign policy chief Federica Mogherini, gathered on Monday in Brussels to discuss ways of preserving the Iran nuclear deal.

Iran's President Hassan Rouhani announced on 8 May — one year the after US withdrawal from the JCPOA — that Tehran would partially discontinue its commitments under the deal. The Iranian president gave Europe 60 days to ensure Iran's interests were protected under the agreement. Otherwise, Tehran is ready to take further steps towards scrapping the nuclear deal, Rouhani added.

EU Calls for Ceasefire, Return to Dialogue Among All Parties Involved in Libyan Crisis

The European Union Foreign Affairs Council called on 13 May for a ceasefire in Libya, saying that the conflict around the capital Tripoli was a threat to international peace and security.

"The LNA military attack on Tripoli and the subsequent escalation in and around the capital constitutes a threat to international peace and security and further threatens the stability of Libya…. The EU calls on all parties to immediately implement a ceasefire and to engage with the United nations to ensure a full and comprehensive cessation of hostilities", the council said in a statement.

The council also said that the military action in Libya increased the risk of terrorist activities arising across the country.

The EU Council further urged all parties involved in the conflict to re-commit to the UN-facilitated political dialogue and to work towards a solution of the Libyan crisis in order to pave way to hold national elections.

On 13 May, EU foreign policy chief Federica Mogherini met with Mustafa Sarraj, the prime minister of the UN-backed Libyan Government of National Accord to discuss the humanitarian implications of the clashes in Libya. During the meeting Mogherini emphasized the need to protect civilian lives in the conflict.

The situation in Libya, which has been engulfed in unrest since 2011, deteriorated further in early April after the Libyan National Army (LNA) began an offensive on the Libyan capital of Tripoli. The Government of National Accord (GNA), which currently controls Tripoli, promptly announced a counteroffensive against the LNA.

Since longtime Libyan leader Muammar Gaddafi was overthrown and killed in 2011, the country has been divided between two governments, with the eastern part controlled by the LNA-backed parliament, based in Tobruk, and the western part governed by the Tripoli-based GNA.