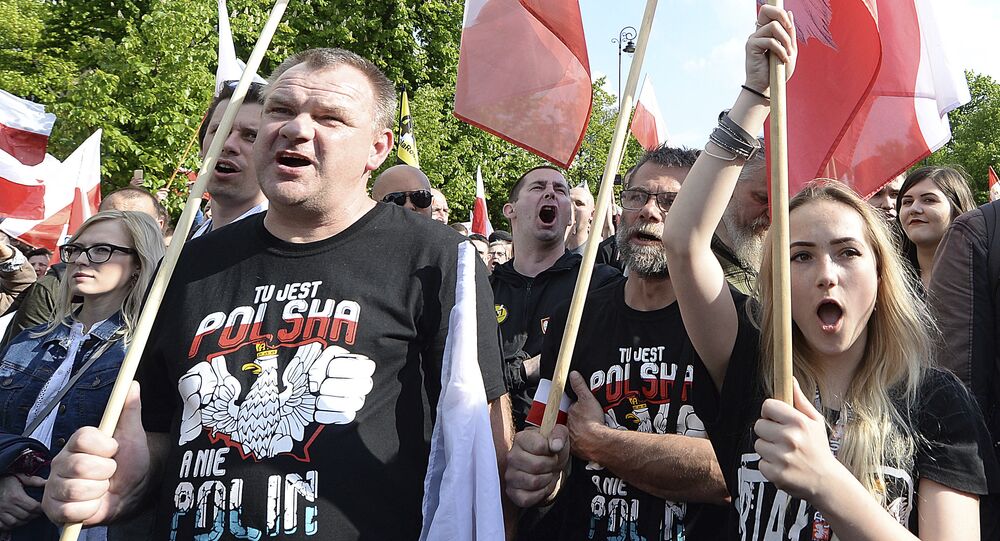 The protest was aimed at marking Poles' opposition to the Justice for Uncompensated Survivors Today Act (JUST Act), a 2018 US law requiring the State Department to report to Congress on what European countries have done to compensate Holocaust survivors or their heirs for assets seized under Nazi or communist rule.

Thousands of Polish nationalists took to the streets of Warsaw on Saturday, gathering before the US Embassy to protest what they felt was an unfair piece of US legislation trying to unjustly extract wealth from Poland.

"This is Poland, not Polin," the crowd chanted, referring to the Hebrew name for the country, with protesters carrying signs reading "Poland has no obligations" and "Holocaust Hyenas" to mark their dissatisfaction. Protesters fear that Jewish organisations could use the US legislation to demand up to $300 billion in restitution.

"Why should we have to pay money today when nobody gives us anything? Americans only think about Jewish and not Polish interests," Kamil Wencwel, a 22-year-old protester, complained, his sentiments echoed by other protesters, some of them suggesting that Poles, not Jews, were the main victims of the Nazis.

Warsaw Will Not Pay

Speaking at an election rally in Mlawa, northern Poland on Saturday, Prime Minister Mateusz Morawiecki attempted to ally Poles fears, saying that Warsaw would "not allow any damages to be paid to anyone because it is us who should get damages."

© REUTERS / Kacper Pempel/File Photo
Petition Asks Trump to Help Poland Extract WWII Reparations From Russia, Germany
US President Donald Trump signed the JUST Act into law in May 2018, with the measure, seeking to monitor countries' legal efforts to recover "wrongfully seized or transferred" property and assets for Holocaust survivors and their families, heavily criticised in Poland. The law also seeks to return any property taken from Polish Jews during the Communist Polish government's nationalization campaigns.

Poland's ethnic Jewish community was all but wiped out during the Second World War, with an estimated 3 million Jews, or 90 percent of those calling Poland home, killed by the Nazis during the Holocaust. Hundreds of thousands more Jews emigrated from Poland in the communist period.

Poland was one of countries hardest hit by World War II, with an estimated 6.5 million Poles (including 3 million Jews) killed in fighting, extermination and prisoner camps, due to poor treatment, hunger and untreated injuries. 600,000 Soviet soldiers laid down their lives to liberate the country from the Nazis between 1944 and 1945.