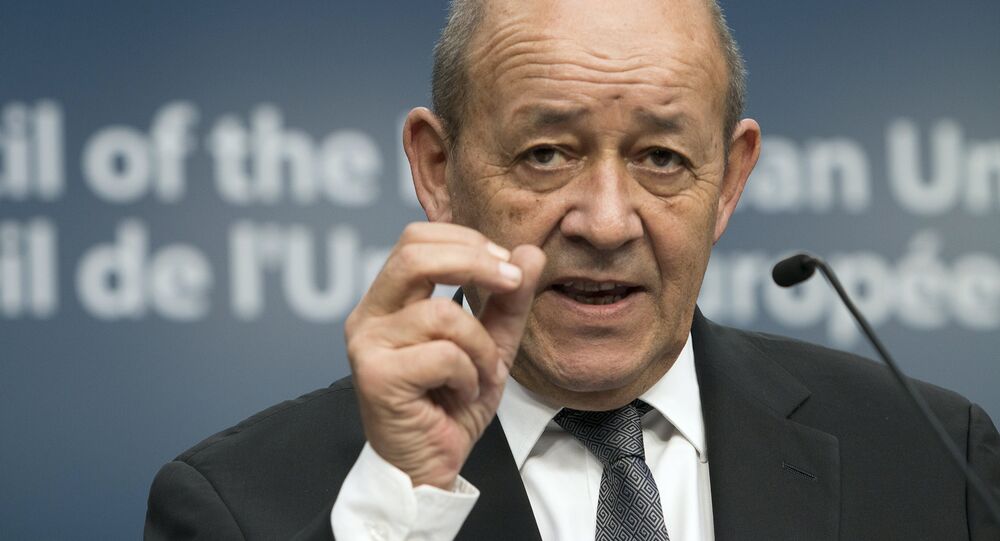 "Some advocate that relations between states should no longer be based on cooperation, but on the confrontation of powers. We risk switching to a kind of international anarchy", the minister said in an interview with Le Parisien newspaper.

He also highlighted two other important phenomena in the relations of countries that are affecting international security.

READ MORE: US Pushing Iran to Violate Nuclear Deal to Declare it a Security Threat – Source

"The main principles and foundations of international life are currently being shattered into fragments… institutions, treaties, earlier promises and boundaries are not respected", he noted.

© AFP 2020 / Kirill KUDRYAVTSEV
Dangers Grow: 'New Cold War' Acquired an Evident Ideological Component - Scholar
Le Drian believes that the blame for this lies with US President Donald Trump, as well as with China and Russia. He also stated that the forms of "hyper-violence, namely continuing terrorism" are currently developing.

Le Drian expressed the wish that all parties comply with the Joint Comprehensive Plan of Action (JCPOA), also known as the Iran nuclear deal, stressing that this applies primarily to Iran, but the United States is also responsible.

One year after US withdrawal from the Iran nuclear deal, Tehran announced on Wednesday, that it had partially discontinued its commitments under the deal and gave Europe 60 days to ensure Iran's interests were protected under the agreement.

Otherwise, Tehran is ready to take further steps on scrapping the JCPOA. Paris expressed concern over Tehran's statements regarding its intention to stop fulfilling a number of obligations under the JCPOA.

Macron on Iran Nuke Deal: We Need to Do Everything to Preserve JCPOA

France, Germany and the UK Remain 'Fully Committed' to Maintaining the JCPOA