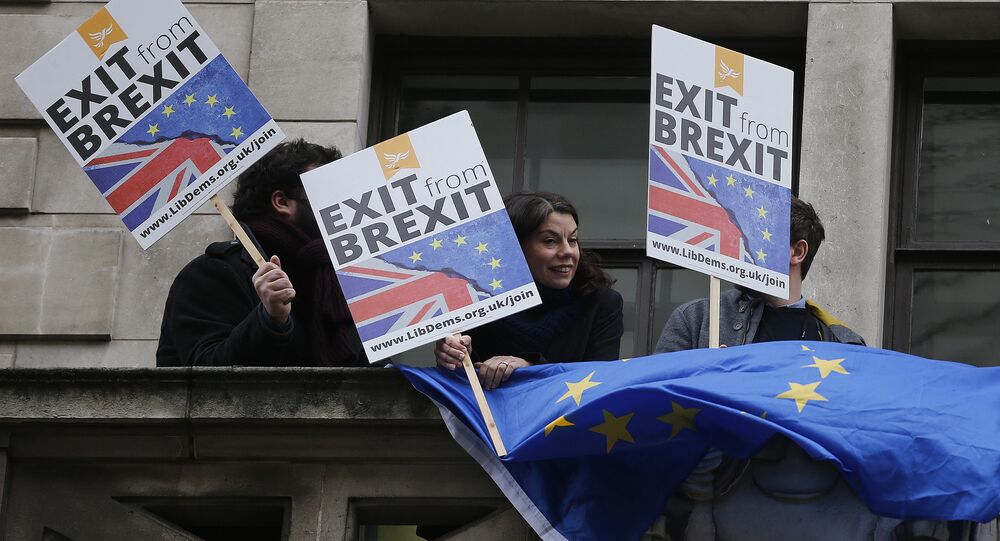 At the manifesto’s launch, Cable - who’s set to resign his post in the summer - declared the Liberal Democrats to be “unambiguous and honest” in its quest to derail Brexit. The party has consistently been the most pro-European party in British politics for several decades.

The Liberal Democrats have attempted to make a splash in the impending European parliament elections by plastering the slogan ‘Bollocks to Brexit' on the party's manifesto.

The motto, which Remainers have daubed on t-shirts, protest banners, stickers and even mugs ever since the June 2016 referendum, was appropriated by party leader Vince Cable as he wants to mount a "high-pressure campaign", perhaps emboldened by the Lib Dems' positive local election performance — in which the party gained over 600 council seats.

I got told off by the presiding officer for using this word in the chamber of the Scottish Parliament. Delighted to see my party double down and put it on the front page of the manifesto. #bollockstobrexit @libdems #EuropeanElections2019 👊🏻🐥🔶🔶🔶 https://t.co/knrkvDvOJq

​"We are clearly the best organised, we have been leading the People's Vote argument for three years and we've been the pro-Europe party for 50 years. We are credible and people recognise our unwavering clarity and commitment. We are taking it very seriously, we have a high-pressure social media campaign where we are doing more than Farage's people. We are out of the traps early, and expect to do well. But it is a very unpredictable scenario," Cable told The Guardian.

However, despite the party's aggressive pro-Remain stance, the leader also bemoaned having been compelled to devote so much time to Brexit, an issue he said had become "mind-numbing" and "repetitious", with "the same slogans, no new arguments and very unproductive [sic]".

Vote Lib Dem to #StopBrexit — or if you prefer, pick up a limited #BollocksToBrexit edition of our manifesto @LibDems are the biggest, strongest, most consistent Stop Brexit party — #VoteLibDem on 23 May. pic.twitter.com/Xc6gt3mMRb

​"That's why people are getting angry, they know the arguments, they've heard them, they aren't going anywhere. It's pent-up anger on both sides," he explained.

The bellicose slogan was obviously intended to provoke public reaction, and based on social media responses to the manifesto launch it has clearly succeeded in this respect — although not every tweeter was entirely enamoured with the approach.

Vince Cable announces that the Lib Dem election slogan will be “Bollocks to Brexit”.

A party so desperate for attention that it’s willing to stick two fingers to the millions who voted for, and believe in, Brexit.

And to think the Liberal Party used to stand for working people!

I'm assuming that the slogan was "bollocks to brexit?" #LibDems showing how #politics have sunk to a new level

Lib Dems campaigning on "Bollocks to Brexit" slogan is depressing. Fine for activists,
but the last thing we need rn is mainstream parties attention-seeking through coarse political debate https://t.co/89l5eLbEmP

​​​​Whatever one's feelings on the slogan however, that a mainstream political party can use the word ‘bollocks' without fear of legal reprisal is a reflection of how times have changed in the UK. A mere four decades ago, the title of legendary punk band the Sex Pistols' 1977 album Never Mind The Bollocks, Here's The Sex Pistols provoked outcry, and was subject to "blatant acts of censorship by [the] media and retail outlets".

Law enforcement officials visited Virgin record store branches in London and told them they faced prosecution for indecency as stipulated by the 1899 Indecent Advertisements Act if they displayed posters of the album cover in their windows — and a record shop manager in Nottingham was arrested for displaying the record after refusing to cover up the word ‘bollocks'. At the manager's resultant trial, expert witness Professor James Kinsley, Head of the School of English at the University of Nottingham, argued the word "bollocks" was not obscene, and actually a legitimate Old English term formerly used to refer to a priest, and which, in the context of the title, meant "nonsense". It was also noted early English translations of the Bible used "bollocks" to refer to testicles, this being replaced by the word "stones" in the King James version of the Bible. The manager was eventually exonerated.

"Much as I wholeheartedly deplore the vulgar exploitation of the worst instincts of human nature for the purchases of commercial profits by both you and your company, we must reluctantly find you not guilty of each of the four charges," the judge ruled.