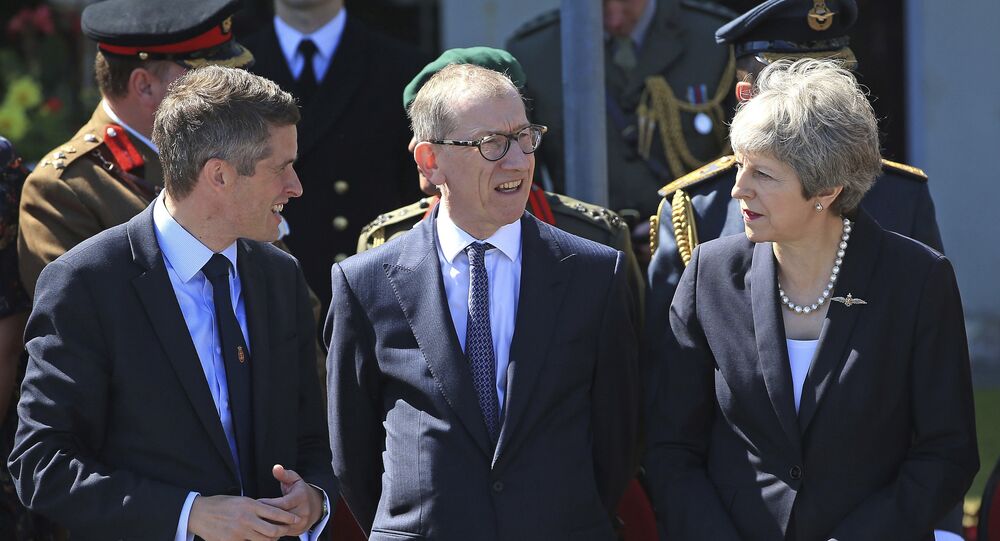 UK Prime Minister Theresa May dismissed Gavin Williamson from his post of Defence Secretary on 1 May over a leak of confidential discussions about Chinese firm Huawei's involvement in the development of Britain's future 5G network.

Gavin Williamson was fired as Defence Secretary after UK Prime Minister Theresa May was told that he had been speculating that her diabetes made her unfit to hold office, The Times reported.

His claims were overheard by a senior Tory, who reported it back to No. 10, the media outlet's sources alleged.

Reacting to the reports, Williamson denied having ever brought up May's health.

But his alleged diabetes speculation is said to have not been the only issue in his relations with the prime minister: May's aides told The Times that her trust in Williamson had been shattered by his belligerence. Williamson sought to send the armed forces into action, which raised May's concerns that it may lead to him starting a war, the paper wrote.

© AFP 2021 / Oli Scarff
'Eat In or Take Huawei?' McDonalds Photo Gets Gavin Williamson Trolled Online
When May refused to authorise the dispatch of Royal Navy warships into Chinese waters in the South China Sea, the now-ex defence secretary purportedly scribbled "f*ck the prime minister" on the paperwork, which was reported back to Downing Street.

While one of May's allies said that the former defence secretary's approach was to find a pretext to send troops into action, a friend of Williamson told The Times that "it's ironic that an NSC document has been leaked in attempt to discredit Gavin".

Williamson has already reacted to the reports, telling Sky News' Alistair Bunkall that "it is absolutely crazy, on both counts. Of course no one has ever suggested it. Classic PM/Sedwill smear because they don't have any evidence".

The development comes four days after the prime minister's office announced she had decided to sack Defence Secretary Gavin Williamson after obtaining compelling evidence that he was behind a leak of the decision by the UK National Security Council, chaired by Theresa May, to allow Chinese telecom giant Huawei's partial involvement in the development of Britain's future 5G mobile phone network.

Williamson has vehemently denied his involvement in the leak, having denounced it as a "shabby and discredited witch hunt" and said that he would have been exonerated after a "proper, full and impartial" investigation.

"I am sorry that you feel that recent leaks from the National Security Council originated in my Department. I emphatically believe this was not the case. I strenuously deny that I was in any way involved in this leak and I am confident that a thorough and formal inquiry would have vindicated my position", he wrote in a letter to May.

In the meantime, the Metropolitan Police said the NSC leak "did not contain information that would breach the Official Secrets Act" and "did not amount to a criminal offence".

© AP Photo / Dake Kang
UK Cabinet Ministers to Hand Over Mobile Phones in Huawei Leak Inquiry - Reports
Over the past few months, Huawei has been hit with allegations that it has been spying on behalf of the Chinese government and stealing commercial information.

The company has flatly denied the accusations, insisting that it is independent from the government and sees no reason for restrictions on its 5G activities in any country.

The United States, New Zealand, and Australia have already banned Huawei from building their 5G networks, citing national security threat concerns. Washington has also been pressuring its European allies to follow suit and introduce similar restrictions, with Secretary of State Mike Pompeo threatening to stop sharing intelligence with countries that use Huawei equipment.