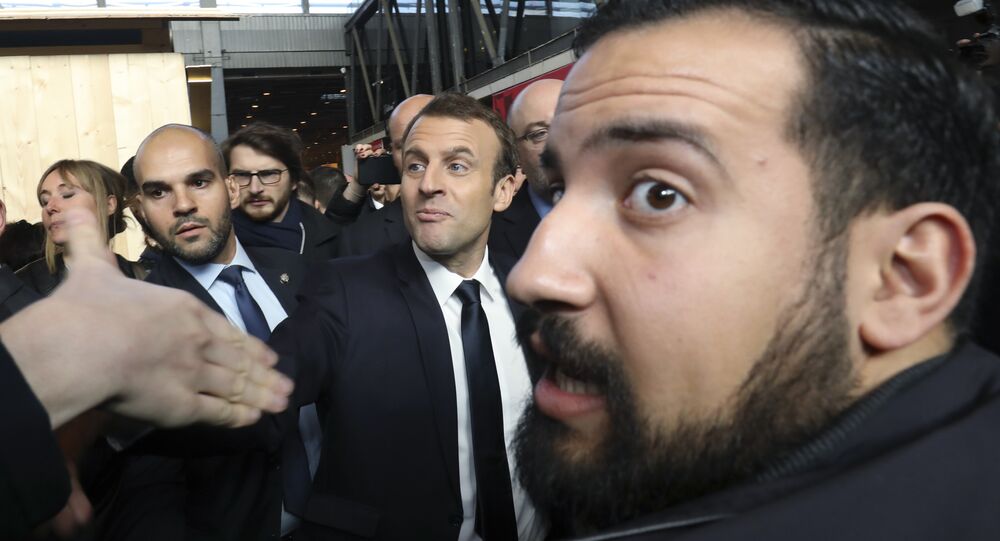 A video capturing Macron’s former security aide, Alexandre Benalla, punching a young protester emerged in July 2018. He was promptly suspended from duties and then sacked in August, with Macron describing his actions as a "betrayal."

French President Emmanuel Macron has appointed Gendarmerie Colonel Benoit Ferrand as his new head of security to replace General Lionel Lavergne due to the involvement of the latter in the Benalla case, l'Opinion reported on Saturday.

The appointment comes after in March, the French Senate's executive body agreed to refer three senior officials in the president's administration to prosecutors after they were suspected of providing false testimony in the case involving Emmanuel Macron's former security aide Alexandre Benalla. The 26-member panel pointed to "inconsistencies and contradictions" in the statements to its investigative committee by Macron's head of security services, Lionel Lavergne.

© AP Photo / Christophe Ena
Ex-Macron’s Aide Returns Diplomatic Passports After Months of Requests – Reports
In July 2018, a video which captured how Benalla punched a young protester led to his prompt suspension from duties. The following month, Benalla was sacked. The former security aide was charged with multiple offences, including violent acts, interfering in the work of public services, wearing an official insignia without authorisation, concealing video materials and breaching professional secrecy. Meanwhile, Benalla has said that he considered his actions during the rally as legitimate; according to him, he attempted to help police officers confront offenders.
...
Reddit
Google+
Blogger
Pinterest
StumbleUpon
Telegram
WhatsApp
10