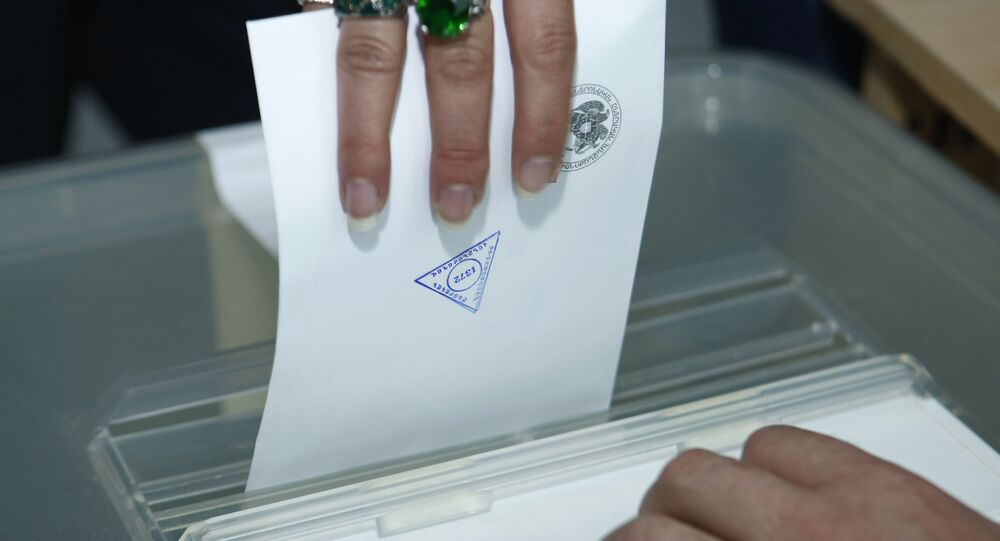 The Conservatives are defending 4,906 council seats in local elections across England. Sputnik looks at some of the candidates from various parties who have been rejected or suspended for various reasons, including tweeting allegedly sexist and anti-Semitic tweets.

Voters are going to the polls all over England in local elections for council seats. But many candidates have been suspended.

In the social media age it is easier than ever for someone to be upbraided for comments they have made about gender, race, religion or some other politically correct subject.

Here are some of those who have fallen foul of the Twitter police.

On the eve of the election, on Wednesday 1 May, a local newspaper reported Michael Goddard, the Conservative candidate for Cardwell ward in North Hertfordshire District Council had been suspended over old Facebook posts.

​In January 2018 Mr Goddard commented on the history of the Golliwog, a cartoon created in the 19th century, and in July 2018 he appeared to endorse a post from Albion First, a photograph of Sadiq Khan with the caption "like and share if you are ashamed that this man is Mayor of London."

"Mr Goddard has been suspended pending an investigation and we will make no further comment until that process has been concluded," Hitchin and Hampden Conservative Association told the Comet.

He was suspended and, despite apologising, did not stand at the elections.

​"I am deeply and sincerely sorry for these unacceptable and sexist tweets. These tweets absolutely do not reflect my views. This was a very dark time for me, and these tweets were an outlet for my own sadness. I don't remember posting all of these comments. I am mortified by them and ashamed of them and I wholeheartedly apologise," wrote Gray.

"What about FGM? Honour Killings? Forced marriage? What do you think about the protest of women in Iran, Saudi-Arabia and other Islamic countries against the compulsory hijab?", he said in response to a tweet by Labour MP Naz Shah.

"I never made any comment online or anywhere else which express hatred or violent against any person," said Toth-Nagy, who plans to dispute the suspension.

​"He is suspended from the Liberal Democrats. The views he expressed on social media are in no way in line with or represent the values of the Party," said a Liberal Democrat spokesman.

Toth-Nagy told the Metro his comments were "freedom of expression" and on 25 April he posted another tweet in which he wrote that Islam "supported the oppression of women".

A Conservative candidate in Nottingham was suspended after he tried to draw parallels between Remainers and Nazis.

In a Facebook post which has since been deleted, Carl Husted said the Revoke Article 50 petition "now has the same number of signatures as the number of people who voted for Hitler's Nazi party in 1930 Germany," according to iNews.

Husted said it was a joke which had been deliberately "misunderstood."

Husted also wrote that Labour leader Jeremy Corbyn was "repositioning Labour as the party of honest to goodness, hard-working jihadis" and said he was an "existential threat."

A Labour candidate in Devon was suspended from the party after allegedly making social media posts with links to allegedly anti-Semitic material.

Virginia Keyes, standing in the Tormohun ward in Torquay, was criticised by TV presenter Rachel Riley.

Conservative councillor Jacqui Harris, who was standing for re-election in Harbury ward in Stratford-upon-Avon, Warwickshire, got into hot water when she commented on a tweet.

She was suspended when she appeared to agree with the comment that "the whole antisemitism thing is a false flag, probably masterminded by Mossad/CIA."

​"Spot on. Don't you find it timely that this was encouraged fanned and exploded just before the release of the report on Israel and war crimes?" Harris replied.

Harris, who was suspended and is standing in Thursday's election as an independent, insisted she was commenting on "how the UK is being paralysed and silenced by folk being labelled, so we are not properly debating topics."

Allegations regarding comments made on social media came too late to remove Gloria Theniel, a Conservative candidate  for Peninsula ward on Medway Council in Kent.

Kent Online reported on 1 May Ms Theniel — who was born in Tower Hamlets in east London —  had been suspended by the Conservatives following comments she made about Muslims.

"How sad to see it looks like my home town will appointment (sic) a Muslim Mayor. Look what one did in Tower Hamlets my birth place. #Sad," wrote Ms Theniel in May 2016.

She also retweeted the following comment by GeezaJay2013: "It's sad to think that London, once one of the greatest cities in the world. Once known for Art, Culture, Fun and Beauty, is now a city ravaged by third world values. Rape, acid attacks, sharia zones, terrorism. All in the name of multiculturalism. Was it worth it?"

German AfD Members Complain About Attacks on Party Ahead of EU, Local Elections