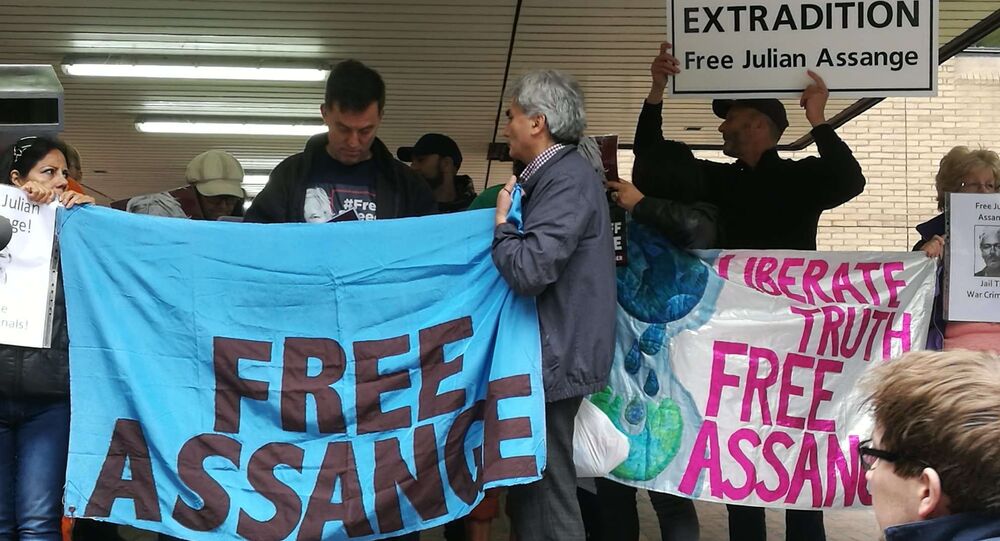 Assange, who was dragged from the Ecuadorian embassy and arrested on 11 April after residing at the Knightsbridge-based compound for seven years, was sentenced to 50 weeks in prison on Wednesday. He's now facing a hearing that may lead to his extradition to the US due to Wikileaks' history of publishing classified documents from the US government.

Supporters of Wikileaks CEO Julian Assange gathered near Southwark Crown Court in London, where the Wikileaks founder was sentenced to 50 weeks in prison for breaching his bail conditions on Wednesday.

Demonstrators chanted slogans in support of Mr Assange, who was later transported by Metropolitan Police in a white van following his sentencing.

© Sputnik
LIVE UPDATES: Assange Sentenced to 50 Weeks in Jail Over Bail Breach (VIDEO)
When asked about the developments of Assange's sentencing, a protester from the #FreeJulianAssange campaign told Sputnik that Assange was arrested ahead of US President Donald Trump's visit to the UK.

"When Julian Assange was evicted from the Ecuadorian embassy, that was concocted by US president Donald Trump's government in the US. They put pressure on Ecuador to kick him out, and then coincidentally, he's going to kiss the hand of the queen, Cabinet's going to kiss the backside of Trump and Julian is in danger of being extradited through the backdoor to the United States, and we won't see or hear from him again..

"We have to stop this gross injustice," the protester said. "This is a terrible thing that's going on. We would not have sent somebody back to Hitler's Germany to stand trial."

"Why are we doing this to this man? All he has done is tell the truth," the protester added.

Wikileaks editor-in-Chief Kristinn Hrafnsson, who made a public statement after the sentencing, told Sputnik that he had not spoken to Mr Assange prior to the trial and that the US government and UK authorities will not allow anyone to speak to the Wikileaks founder at present, making it difficult to provide updates on the Wikileaks CEO's condition.

US authorities had already requested his extradition, infringing on Assange's human rights and right as a journalist, Mr. Hrafsson added.

"It is an extradition request that needs to be fought, and the first of the court proceedings starts tomorrow," Mr. Hrafsson said. "That is a question of life or death for [Julian Assange], and it's a question of preserving a major journalistic principle — the right for a publisher to publish truthful information. That's what it's all about."

When asked about how people can help to fight Mr Assange's extradition, Mr. Hrafnsson said, "Do everything that is possible."

"Write to your MPs and gather together," he said. "Think of what is happening here. I don't have any faith in the government or branches of government. It seems to me, that with all of the failures of those branches in the Wikileaks case, that people must rise up and do something."

"It has come to a point where everything has been dismissed," Mr. Hrafnsson added. "The judge dismissed the UN Working Group on Arbitrary Detention ruling and ridiculed it; the same as UK foreign minister [Jeremy Hunt]."

"This is outrageous, and if we don't start to organise and protest and change things, we're going to see a breakdown all norms in our society and international system, so it's a very serious thing and a litmus test for everybody."

US authorities are building an espionage case against the Wikileaks founder, which could result in the death penalty or life imprisonment, but have opted to charge Mr Assange with "conspiracy to commit computer intrusion for agreeing to break a password to a classified US government computer," according to the US Department of Justice.

Doomed to be Handed Over to US, Assange Still Has Cards Up His Sleeve – Analysts