Even though Theresa May survived a no-confidence vote last December, which is supposed to keep her unchallenged by the Conservative Party for the next year, British media reports suggest that the embattled UK prime minister is about to receive another bitter blow.

Each day is a new challenge for UK Prime Minister Theresa May, who is still struggling to get the parliament's support for her Brexit withdrawal agreement, as she was reportedly informed on Monday that she would face an extraordinary grassroot Tories' vote to oust her.

According to multiple reports, the meeting of 800 constituency chairmen and women, as well as senior Tory activists who will demand that she step down over her handling of Brexit will take place in June. 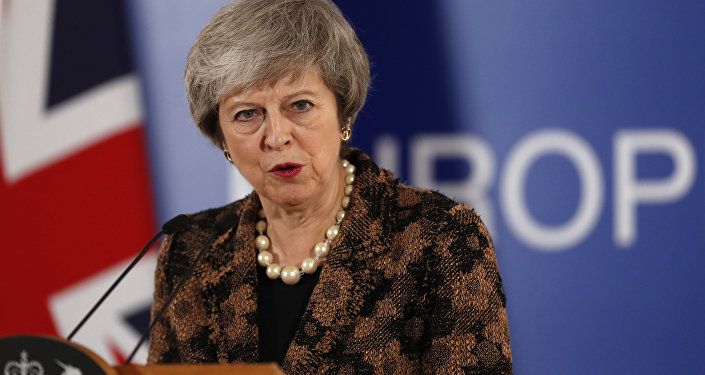 © AP Photo / Alastair Grant
Next UK Prime Minister: Bookmakers' Favourites to Replace Theresa May
The vote, which is said to be unprecedented in the Conservative Party's 185-year history, was reportedly organised after the threshold for a petition, mounted by Chairwoman of London East Area Conservatives Dinah Glover, to push for the Emergency General Meeting had been passed.

The petiton reportedly says that the signatories "no longer feel that Mrs May is the right person to continue as Prime Minister to lead us forward in the negotiations. We therefore with great reluctance ask that she considers her position and resigns, to allow the Conservative Party to choose another leader, and the Country to move forward and negotiate our exit from the EU".

"I am extremely sad that we have had to organise this. Unfortunately, the Prime Minister is no longer the solution to the problem, but is actually the block to Brexit", The Sun cited Glover as saying.

Even though the vote is non-binding, losing it would put much pressure on the prime minister, who has already survived an internal no-confidence vote, to resign.

© AFP 2019 / Jeff J Mitchell / POOL
British Conservatives Plotting to Force Theresa May Out Over Breaking Brexit Promises
Under existing rules, the head of the party cannot be subjected to a fresh no-confidence vote for the next 12 months. Even though there was certain speculation that backbenchers on the party's 1922 Committee might change the rule, they eventually rejected the calls for amendments and decided to grant the party leader a 12-month grace period to go unchallenged.

Last month, May promised to step down if Tories back the Brexit withdrawal deal she negotiated with Brussels. She noted that she knew that the MPs did not want her to lead the next phase of Brexit negotiations "and I won't stand in the way of that".

The United Kingdom was supposed to leave the European Union on 29 March, but the prime minister opted to request a deadline extension until 31 October since she repeatedly failed to gain support from British lawmakers for her agreement. In addition, Brussels stressed that London must hold elections to the European Parliament in May, or leave on 1 June without a deal.