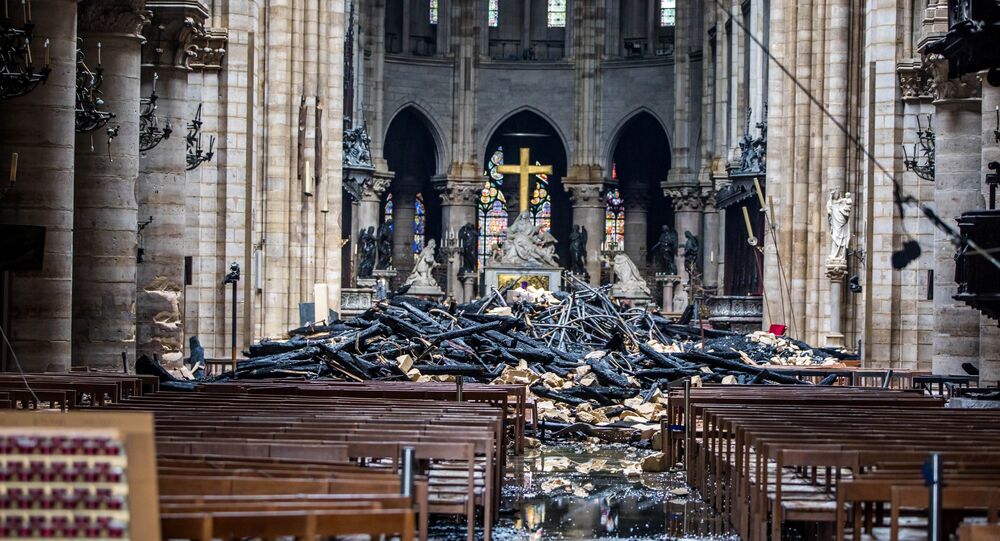 Residents living in the vicinity of the fire-ravaged Notre Dame de Paris have been warned of lead contamination resulting from the conflagration. The police have recommended cleaning the dust that settled after the inferno with wet wipes.

The Paris police cited the result of tests showing that the frame of the renowned cathedral as well as its iconic spire had discharged particles of the noxious metal following the 15 April blaze that engulfed Notre Dame.

According to the probe, lead was found in areas adjacent to the cathedral, noting that it was "very localised" and "notably on premises that may have been standing open at the time of the fire, and where dust had settled".

The police played down the threat of contamination as the detrimental effects of lead poisoning manifest themselves over years of exposure to the toxic metal.

The police added that public areas under threat for potential lead contamination have been shut down and will not be reopened until lead levels stabilise.

The announcement comes as the French environmental campaigners, Robin des Bois, reported that some 300 tonnes of lead from Notre Dame's roof and spire had melted in the conflagration. The group called on the authorities to detoxify the debris produced in the disaster.

© Sputnik / Alexey Nikolsky
France Appreciates Russia's Offer to Help Rebuild Notre Dame - Envoy
A massive blaze broke out at the Notre Dame cathedral on 15 April, resulting in the collapse of the building's spire and two-thirds of its roof. Firefighters, however, managed to extinguish the inferno saving the historic building and the relics it housed.
...
Reddit
Google+
Blogger
Pinterest
StumbleUpon
Telegram
WhatsApp
03
Topic:
Fire Breaks Out at Iconic Notre Dame in Paris: Cathedral Partially Destroyed (68)