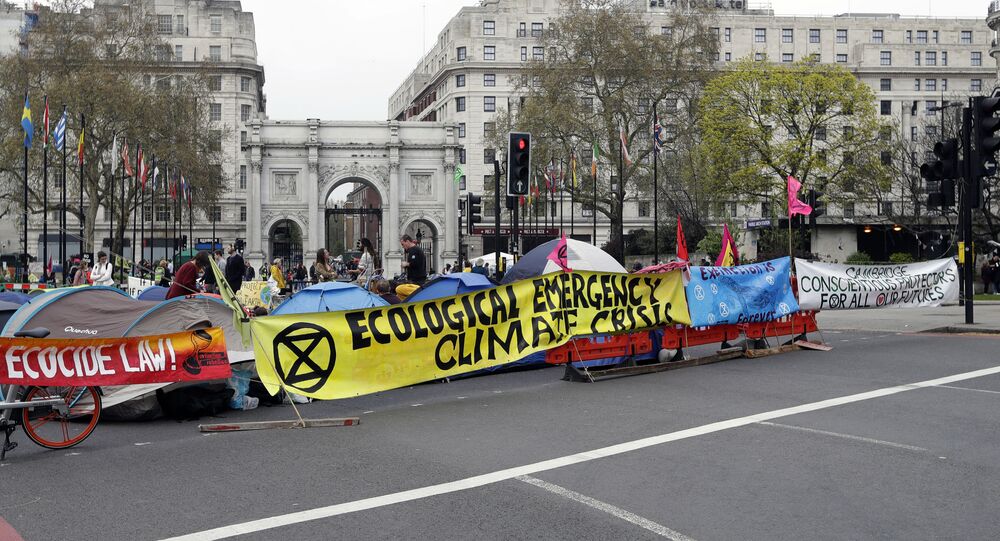 The artwork resembles previous artwork from the Bristol-based artist and shows a child with an Extinction Rebellion sign crouching near a plant pushing from the ground, with the words "From this moment despair ends and tactics begin".

A mural at Marble Arch in London appearing to be the work of famed street artist Banksy has surfaced following the tenth day of demonstrations by Extinction Rebellion (XR) protestors.

The artwork was found on Thursday as protestors gathered for their "closing ceremony" of disruptions across Central London. XR's Twitter feed showcased the artwork, which quotes Raoul Vaneigem's 'The Revolution of Everday Life'.

Skeena Rathor, XR vision coordinator, told an audience at the Speaker's Corner in Hyde Park that the event was a "pause" in demonstrations.

The graffiti was unveiled days after Massive Attack performed at the Marble Arch on Easter weekend, which featured heavy themes of climate change.

Robert De Naja, 54, has long been suspected of being Banksy, with DJ Goldie referring to Banksy as "Robert" in an 2017 interview.

Banksy's ‘Love is in the Bin' piece also was sold in an auction £860,000, only to be shredded halfway, with the secretive artist later publishing a video stating: "In rehearsals, it worked every time."

XR protestors unleashed major disruptions across the City of London's Canary Wharf district in their tenth day of action, where protestors glued themselves in front of the London Stock Exchange entrance and climbed on top of a DLR train at Canary Wharf station during heavy traffic. Since the rallies began on 15 April, police have arrested over 1,000 activists across the UK capital.