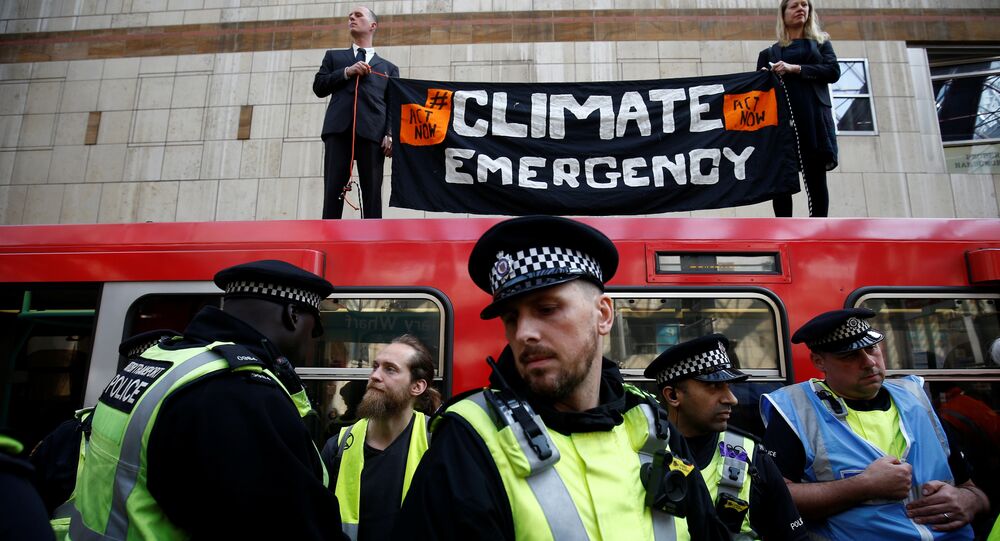 Trains at Canary Wharf station have also been disrupted as protestors climbed on top of a Docklands Light Railway train, with one activist gluing herself to the carts. Activists from the Christian Climate Action joined the demonstrations by holding signs stating "business as usual death" and "don't jail the canaries" whilst holding a prayer vigil.

More protestors blocked a second entrance to the London Stock Exchange, but have removed the demonstrators. The British Transport Police said in a statement that five arrests had been made.

The protest is the second to take place at Canary Wharf station after two men and a woman were accused of gluing themselves to a train last Wednesday. Activists have also staged disruptions in front of Goldman Sachs with a heavy police presence.

XR said in a statement: "Many of the most environmentally destructive companies in the world have their stock market listings at the London Stock Exchange (LSE). This institution literally trades in the devastation of our planet.

"These include fossil fuel and highly destructive mining businesses as well as those who are creating ecological catastrophe, such as the cutting down of virgin rainforest for palm oil production."

A spokesman for City of London Police, which deals with the Stock Exchange, said: "We are aware protesters have taken direct action in the City this morning. We have a policing plan in place to manage protester activity."

Protestors across London have planned a 'closing ceremony' at Hyde Park and have agreed to remove blockades and campsites at Parliament Square and Marble Arch. XR said in a statement that it would like to "thank Londoners for opening their hearts" and demonstrate "their willingness to act on the truth".

"We know we have disrupted your lives. We do not do this lightly. We only do this because this is an emergency."

READ MORE: Some 1,000 Arrested as Climate Rebels Keep Up Protests Across London (PHOTOS)

The protests come after a wave of similar rallies where three people had allegedly glued themselves to a train at Canary Wharf station on Wednesday, with the suspects due to appear at Blackfriars court on 16 May. Protesters also staged a "die-in" at the Natural History Museum on Monday and disrupted airport operations at London Heathrow on 19 April. Rallies that have spread across London since 15 April and resulted in over 1,000 arrests and over 10,000 police deployments.