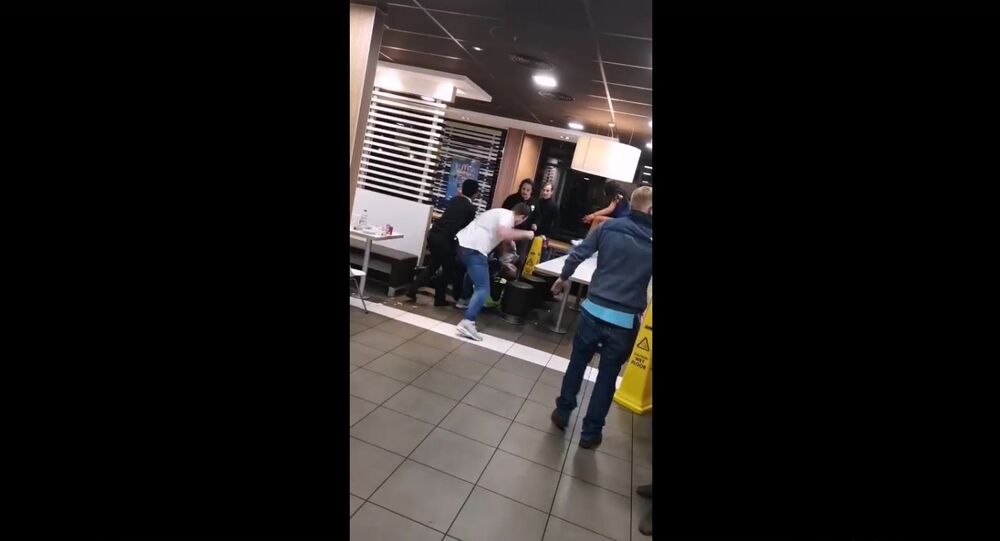 According to the Facebook user who uploaded the video, the video footage was filmed at 4 a.m. in the town of Strood in southeast England.

Onlookers caught on camera a vicious brawl that broke out between a security guard and three young men at a McDonald's restaurant in Kent.

It opens with a verbal confrontation between an officer in a yellow jacket and a couple of blokes.

The guard attempts to kick at a man who backs out and quickly punches back, joined by two other yobs. They rain punches upon the officer and eventually bring him down, apparently landing quite a few more punches on him.

A man in a white polo can be seen taking a wet floor cone and hurling it at the security guard.

Others customers then break up the brawl, with the guard retreating from the scene.

The clip was uploaded on Facebook by a user under the handle Liam Lovett and has been viewed over 330,000 times now.

Liam said the security guard was "okay" after the situation calmed down. "Police was [sic] informed about the situation and finally turned up", he wrote.

"The safety and security of our people and customers is our absolute priority, and it is extremely disappointing to see this sort of behaviour in the restaurant", a McDonald's spokesman told Kent Online. "We do not tolerate any form of violence or abuse and will be cooperating fully with the police investigation".