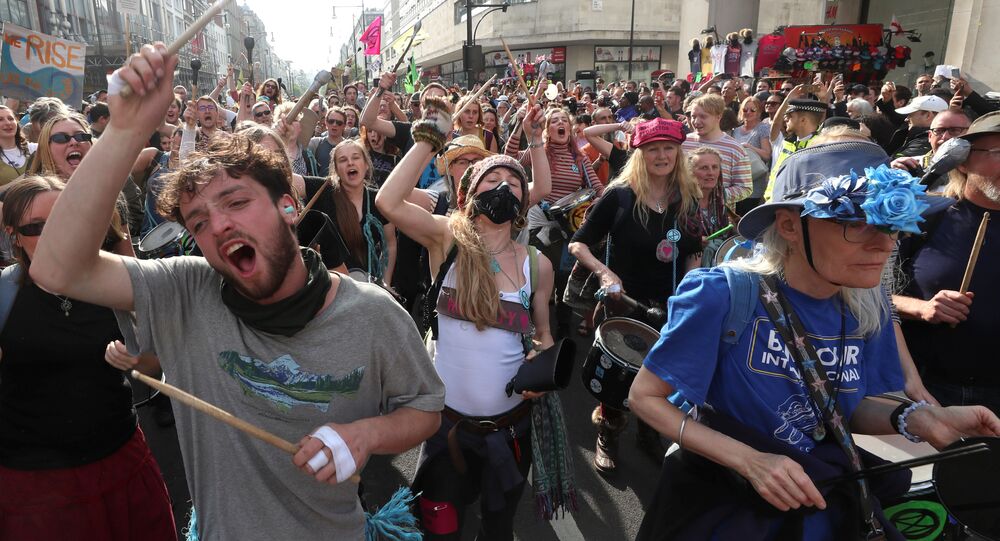 Some 1,000 Arrested as Climate Rebels Keep Up Protests Across London (PHOTOS)

Extinction Rebellion activists have been carrying out a so-called disruption campaign across London, blocking traffic in various parts of the city, since 15 April.

The number of arrests reached 1,065 on 22 April and 53 people have so far been charged amid large-scale Extinction Rebellion environmentalist protests, which have been disrupting the UK capital for almost a week, London's Metropolitan Police Service stated.

Police "remain in frequent contact with the organisers to ensure that the serious disruption to Londoners is brought to a close as soon as possible and that only lawful and peaceful protests continue", Scotland Yard said in a statement.

As of 10:00hrs on Monday, 22 April, 1,065 arrests have been made since Monday, 15 April in connection with ongoing Extinction Rebellion protests. 53 people have been charged https://t.co/gGPnHclVKW pic.twitter.com/mobgNu6CVA

The protesters have mainly been detained on charges of blocking traffic on London's key highways during rush hours and property damage.

The very last protester to be arrested on Waterloo Bridge last night was a 70 y.o. woman. She told my colleague @georginafstubbs that: "The world we are leaving for the children is going to be horrendous and we let it happen. So we have to stand up and fight.”#ExtinctionRebellion pic.twitter.com/OJZsdZuVSQ

Since 15 April, the activists have been moving through London, blocking Waterloo Bridge, Oxford Circus, and Parliament Square. ​The demonstrators have been demanding that politicians take action on climate change.