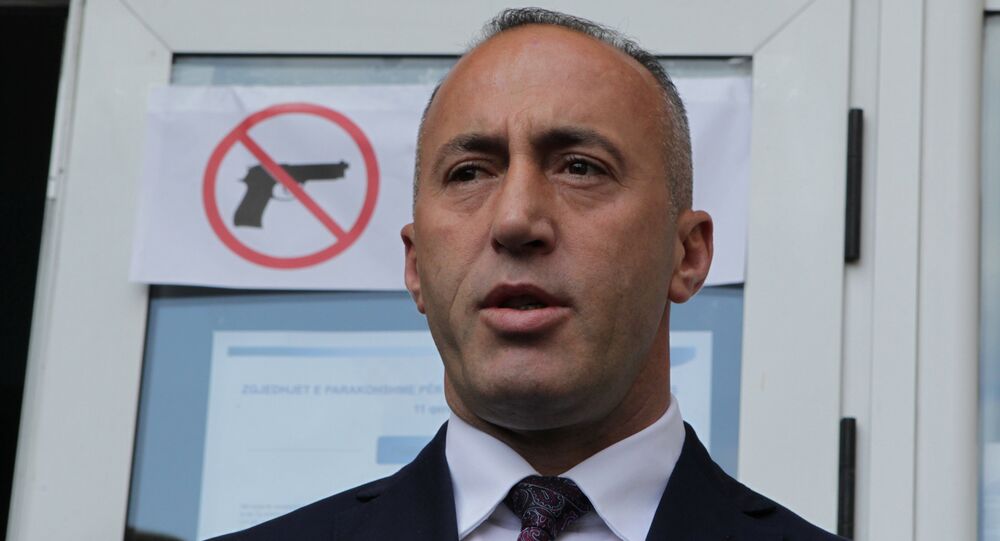 Vladimir “Vovan” Kuznetsov and Alexei “Lexus” Stoliarov, a pair of Russian radio hosts known for their telephone trolling of politicians from around the world, have struck again, this time targeting Ramush Haradinaj, the “prime minister” of the Serbian breakaway region of Kosovo, whose sovereignty is not recognised by Russia or Ukraine.

In a post that has since been scrubbed from his Twitter account, the official wished his "friend Petro Poroshenko and his future Prime Minister Vovan Lexusov…all the best and victory in Sunday's runoff presidential elections".

© AP Photo / Amel Emric
'Kosara Hell': Parents of Deceased Hero Recall Albanian Border Situation of 1999
The post was apparently deleted after the official or one of his assistants realised that "Vovan Lexusov" was just a blend of the comedians' nicknames.

Unfortunately, Haradinaj didn't manage to delete the tweet before it was picked up by other users, who took screenshots of the post and spread it far and wide across the internet.

"How are politicians still falling for this?" UK journalist Shaun Walker asked, suggesting that Vovan and Lexus likely called Haradinaj posing as Poroshenko, and were probably likely to release the audio from their latest prank call sometime soon.

It seems the Kosovo PM has had a call from the Kremlin prankers, Vovan and Lexus. How are politicians still falling for this?! pic.twitter.com/zxrbSsOmVm

The Kosovo PM has now deleted his tweet wishing success to Poroshenko "and his prime minister Vovan Lexusov". I presume the Kremlin-friendly prankers Vovan and Lexus will soon be releasing audio of their latest hoax call…

Others recalled Vovan and Lexus' other pranking capers, or played along and "congratulated" "Prime Minister Vovan Lexusov".

PM Vovan Lexusov is not quite as good as the Lexus Vovalian Bank that fooled Guaidó, but still funny. https://t.co/jtr071Pgew

I wish Ukrainian people will have Vovan Lexusov only!✊🏻

Vovan Lexusenko, to be exact!

The tweet proved particularly popular among Serbs, who remain upset over Kosovo's illegal, NATO-backed declaration of independence from Serbia in 2008, with one user saying Kosovo leaders and their apparently poor understanding of international relations provided an "unlimited source of amusement", with another quipping that "Vovan Lexusov" was "more real than the fake prime minister of Kosovo".

#UkraineElections2019…and the winner of the day is Mighty Vovan Lexusov!:)))
Terrorists turned politicians from #Kosovo* and their understanding of intl relations, unlimited source of amusement. pic.twitter.com/hPGmqc1TzD

Finally, a few speculated about what could have prompted Haradinaj to fall for such an obvious prank, with one user suggesting that perhaps it could be as simple as Haradinaj being lonely and wanting to talk to someone.

Flattery. It's cheap and it works. I guess nobody's called this dude for ages.
😎😎😎

British journalist and Eastern Europe specialist Graham Phillips joked about the now deleted tweet, suggesting that Haradinaj could have easily caught on to the fact that he was being trolled "if he had followed the news, at all, over the past few years, or even just googled 'Vovan Lexusov', or even asked one of his assistants perhaps".

© AP Photo / Manuel Balce Ceneta
'Useful to Keep Them Nervous': LISTEN as Top Trump Aide Blabs US Venezuela Plans (FULL AUDIO)
Vovan and Lexus are well-known for their humorous (and often revealing) discussions with world leaders, speaking to dozens of senior politicians and officials over the years, from self-proclaimed Venezuelan President Juan Guaido and Trump's Venezuela envoy Elliott Abrams, to European Commission President Jean-Claude Juncker, to former US Ambassador to the UN Nikki Haley and US Congresswoman Maxine Waters, to name but a few.

Ukrainians are going to the polls on Sunday for the second round of presidential elections, being asked to choose between incumbent President Petro Poroshenko and challenger Volodymyr Zelenskiy.