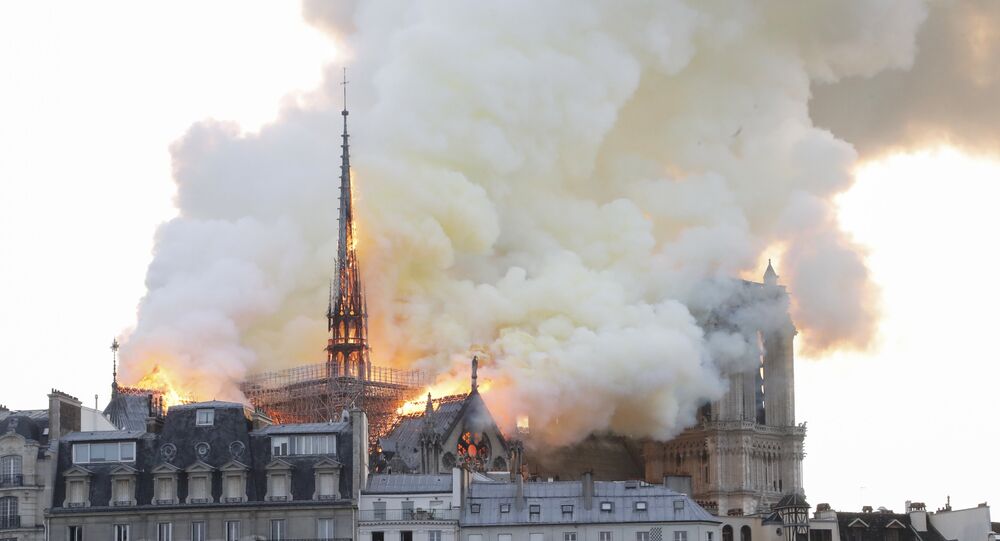 The whole world watched the 856-year-old Notre Dame cathedral go up in flames earlier this week, with French prosecutors assuming that the most likely cause of the devastating blaze was an electrical short circuit.

Daesh* jihadists celebrated the near-demise of the Notre Dame cathedral in Paris as a major fire ravaged the iconic basilica on 15 April, the Middle East Media Research Institute (MEMRI) reported.

While the tragic incident has shocked Christians and others around the globe, some Daesh sympathisers have welcomed the news, viewing it as a good sign for Muslims and an ominous harbinger for the “enemies of Muslims”.

© Sputnik / Julien Mattia
Oy Vey! Rabbi Reportedly Claims Notre Dame Fire May Be DIVINE PUNISHMENT
According to MEMRI, a Daesh-affiliated media outlet posted a photo of the burning cathedral and its collapsed spire, having captioned it, “A good day. It’s time to say goodbye to your pulpit of polytheism”.

The terrorist outlet cited a verse from the Quran, which is reportedly translated into English as a “fitting reward” or “an appropriate recompense” in relation to infidels suffering in hell.

MEMRI made references to several Facebook users who suggested that the Notre Dame blaze was punishment for driving out Daesh fighters from Syria’s Baghouz, the terrorists’ last stronghold in the war-ravaged country.

Another French-speaking supporter reportedly wrote on Facebook that “it’s thrilling” to see “800 years of history of paedophilia, worship of Satan and other diabolical rituals, all up in smoke in a few minutes… not mentioning the Crusades and the various wars led by the Church against the Muslims”.

The Mideast Media Research Institute likewise translated a Telegram message from an “Islamist rebel commander in Syria” who linked the Notre Dame fire to the “collapse of the international order”.

“Far from foolish optimism, rather I sense it is an omen for great good. Likewise, the events that are happening, if we look at them in a comprehensive perspective, we will find them to be arrangements of Divine predestination laying the foundations for the collapse of the international order and beforehand, or at the same time, the agents of the American domain. All these are part of a recurring story in the annals of history, praise Allah. Today the oldest cross fell because of a fire in a church in Paris. By Allah, from the land of the den of lions [Syria] I read it as a great message, and see it as glad tidings”, he wrote.

Aside from MEMRI, the SITE Intelligence Group and Terrorism Research & Analysis Consortium also reported about Daesh sympathisers’ online messages on the blaze, with one chilling warning reading, “Wait for the next”.

Back in 2016, two terrorists, who pledged allegiance to Daesh, took hostages in a Catholic church in Normandy during Mass, having murdered an elderly priest.

A year prior, an Algerian was arrested in Paris on suspicion of killing a woman, but French police found that he had been in touch with a Syria-based French-speaking jihadist about committing an attack on a church in Villejuif, a Paris suburb.

A massive fire broke out at the Notre Dame Cathedral on 15 April, causing its spire and two-thirds of the roof to collapse. Firefighters managed to extinguish the blaze only on 16 April, with investigators saying the possible cause of the inferno was a short circuit.  While the inspection work of the damage is still underway, the French government has pledged to rebuild the gothic cathedral within five years.