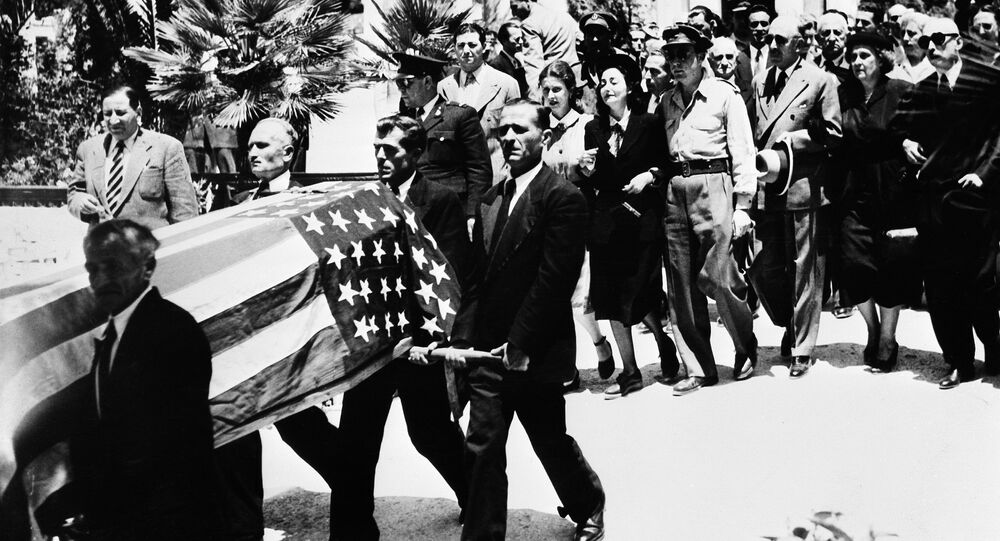 70 Years On - Did CIA Cover Up Identity of US Journalist George Polk's Killers?

On 21 April 1949 Gregoris Staktopoulos, a Greek reporter, was convicted after a nine-day show trial of murdering US journalist George Polk at the height of the Greek Civil War. But mystery still shrouds his death.

The body of George Polk, 34, was found floating in Salonika Bay in northern Greece in May 1948.

He had been tied up and had a single bullet wound to the back of the head.

Polk, a former pilot who fought for the US in the Second World War, was on assignment with the CBS network covering the Greek Civil War.

In 1946 a civil war broke out in Greece with the communist KKE seeking to take control of the country, which had only recently been liberated after occupation by the forces of fascist Italy and Nazi Germany.

“Journalism can never be silent: That is its greatest virtue and its greatest fault. It must speak, and speak immediately, while the echoes of wonder, the claims of triumph and the signs of horror are still in the air.”
— Henry Anatole Grunwald

​All across eastern Europe communists, backed by the Soviet Union and the Red Army, took over.

The Athens government, which was dominated by conservative and pro-Nazi sympathisers, many of whom had collaborated with the German and Italian occupiers, was supported by the British because of the fear of Greece, with its strategic position in the eastern Mediterranean, falling into pro-Soviet hands.

In 1947, the Labour government of Clement Attlee, struggling to rebuild the British economy after the devastation of the Second World War, asked the Americans to take over in Greece, Turkey and several other countries where the Soviets challenged the interests of the West.

1949: Gregorios Staktopoulos is convicted of the murder of journalist, George Polk and sentenced to life imprisonment.

​The US President launched the eponymous Truman Doctrine, which stated that the Americans would not allow any more nations in Europe or the Middle East fall into the hands of communists.

President Truman donated arms and equipment to the Greek government fighting the KKE and the CIA was heavily involved in infiltrating the enemy and left-wing circles which were sympathetic to the KKE.

Polk hoped to get a major exclusive for CBS by getting an interview with the KKE leadership, who were based in the mountainous terrain north of Salonika.

He ended up dead and the George Polk journalism awards were named in his memory.

The narrative put forward by the Greek government and its US allies was that he had been killed by the communists.

Gregoris Staktopoulos, a local journalist, was made a scapegoat and after a brief trial he was jailed for his alleged role in Polk's death.

But in 1990 Kati Marton, a former foreign correspondent, wrote a book, The Polk Conspiracy, in which she claimed Polk had angered the Greek government and its CIA allies, which had him killed.

Polk had also alleged Greek government officials had embezzled US$250,000 in foreign aid from the Truman Administration.

After the murder Staktopoulos was tortured and forced into giving a confession that he had lured Polk into a communist trap.

In 2013 documents were filed with the Appeal Court in Salonika, seeking to posthumously overturn Staktopoulos's conviction.

In his book Wild Bill Donovan: The Spymaster Who Created the OSS and Modern American Espionage, Bill Waller claimed Donovan, the head of the OSS — which later morphed into the CIA — was in Greece at the time and turned a blind eye to the miscarriage of justice because of the Cold War.

"Who killed George Polk, remains a mystery but the evidence clearly points to someone besides Staktopoulos and the communists. Donovan however saw Greece as a crucial battle between the United States and Russia. Prosecuting rightists for the crime would be a setback for that war. In his mind now, the communists had to be guilty," wrote Waller.

After their defeat in 1949 many KKE fighters, including the organisation's leader Nikos Zachariadis went to live in Yugoslavia or the Soviet Union.

During the 1950s, 60s and 70s there were suggestions Polk was murdered by the British, by the CIA or even by smugglers and black marketeers.

In 2007 it emerged the CIA had conveniently lost most of its archives relating to the Polk case.

The only document ever released by the CIA was a 1956 memoranda which claimed two Greek former communists who had just returned to Greece from the Soviet Union claimed they had heard two men confessing to being Polk's assassins.

The Polk family asked the National Security Archive to write to the CIA and review all its documents on the case.

The CIA wrote back to say nine documents, including memoranda to the agency's director, had been destroyed.

"We are unable to locate the original documents or information about their disposition," Dr Allen Weinstein, archivist of the United States, wrote to the National Security Archive.

Why Truman Doctrine Has Lost Its Appeal For Isolationist President Trump