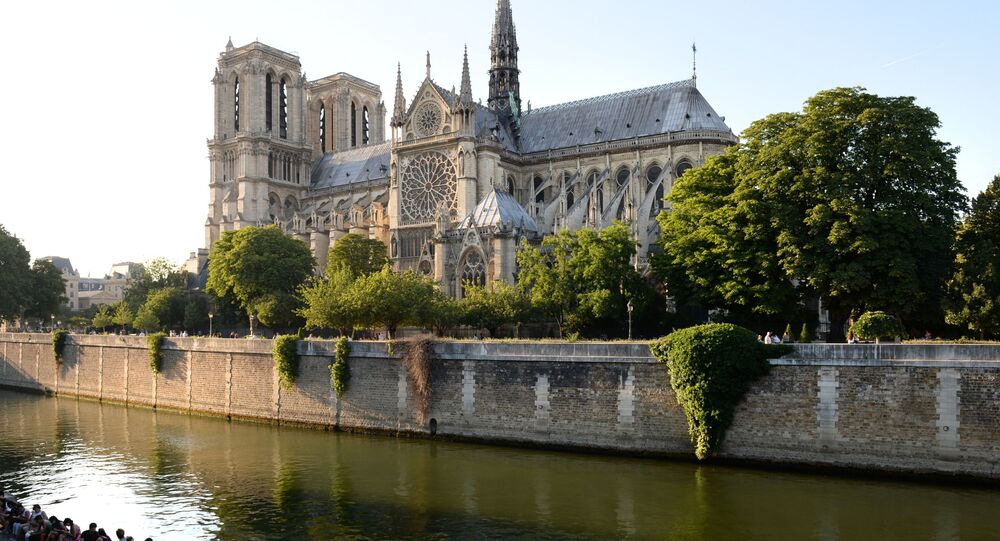 Just two years ago, French Ministry of Culture officials dismissed the plight of the aging, 856-year-old Notre Dame cathedral, saying “France has thousands of monuments” and that the Paris church wasn’t their most pressing concern. “It will not fall down,” one official mused.

Care for Notre Dame has been neglected for centuries. While the French state now owns the structure, the Catholic Church took no better care of it. Built between 1163 and 1345, by the time of the French Revolution it was crumbling and given no special thought.

In 1905, the French state formalized the separation of church and state, a process begun in the 18th century by the Jacobins during the French Revolution, who confiscated Catholic Church lands and rededicated Notre Dame as a temple to the Cult of the Supreme Being, a deistic concept in vogue during the revolution. However, in 1801, Napoleon Bonaparte reversed that move and courted the church's support once more, recognizing Catholicism as one of the French state's religions — the others being Judaism and the Lutheran and Calvinist branches of Protestant Christianity.

Under the 1905 law, the French state owns Notre Dame, and the Catholic Archdiocese of Paris leases the building for free. However, that's led to a century-long dispute over whose responsibility it is to maintain the structure. The French Ministry of Culture furnishes the archdiocese with $2.28 million a year for upkeep of the church, but Notre Dame staff told Time in 2016 that this barely covered running costs and the most basic repairs, and that it wasn't sufficient for any kind of concerted reconstruction.

Those problems were myriad even before Monday's fire, which totally gutted the structure and destroyed its roof, including the spire. During the 19th century, a wave of restoration energy following the publication of Victor Hugo's novel "The Hunchback of Notre Dame" in 1831 saw the stripping away of centuries of grime from the church's facade, but also used low-quality stone and cement to repair the many holes, cracks and other missing pieces all around the building. One hundred-fifty years later, the original 13th century stone has fared better than the slipshod repairs, although even that was sloughing off at an alarming rate before the present round of restorations began in late 2018.

Growing up we all knew that Notre Dame was not a safe place to visit (I must have been inside once, on a class trip I believe). Stuff regularly fell off the ceiling and the roof, pollution was eating the stones.bit was known as a tinder box waiting for a match.

© Sputnik
‘Time is the Architect, the Nation is the Builder’: Notre Dame’s 856-Year Reign Over Paris
The Times of London reported in March 2018 that the cathedral needed $114 million worth of work, based on engineers' findings during a previous restoration project in the 1990s. However, Paris only ponied up $6.84 million to restore the spire, leaving the archdiocese to form the Friends of Notre Dame last October, with the hopes of eventually raising the funds for the restoration itself.

However, the French spirit of secularism is so powerful that few French citizens are willing to give money to the fund. Michel Picaud, who heads the nonprofit, told Time that most of the money would probably come from Americans, who aren't so hesitant to fund such a project.

"There is no part of the building untouched by the irreparable loss of sculptural and decorative elements, let alone the alarming deterioration of structural elements," says the organization's website, which details the crumbling state of the church and hasn't been updated since Monday's blaze. Notre Dame "is in desperate need of attention."

"The damage can only accelerate," Andrew Tallon, an associate professor of art at Vassar College in Poughkeepsie, New York, told Time in July 2016. "The more you wait, the more you need to take down and replace."

When Time asked ministry officials why more wasn't being spent on restoring the structure, given the dearth of problems it faced, they told the publication that Notre Dame just wasn't very high on their priority list.

"France has thousands of monuments," an unnamed official said, noting that Notre Dame "will not fall down."

However, the United Nations Educational, Scientific and Cultural Organization (UNESCO) has already pledged to help Paris rebuild Notre Dame in the wake of the fire, a project French President Emmanuel Macron said Tuesday might take only five years.

In a Tuesday statement, UNESCO Director General Audrey Azoulay said the organization was "already in contact with experts to assess damage, preserve what can be preserved and consider measures in the short and medium term."

"The Palace of Westminster, a masterpiece of Victorian and medieval architecture and engineering, faces an impending crisis which we cannot responsibly ignore," the report said. "It is impossible to say when this will happen, but there is a substantial and growing risk of either a single, catastrophic event, such as a major fire, or a succession of incremental failures in essential systems which would lead to Parliament no longer being able to occupy the Palace."

© AP Photo / Thibault Camus
After Notre Dame, What Iconic Buildings Around the World Are at Risk of Fire?

The BBC quipped at the time that "parts of the Palace of Westminster are so riddled with asbestos, frail stonework and ageing electrics and wiring, it has been said the Grade I-listed building would be knocked down if it was not protected."

On Tuesday, MPs renewed calls to begin the urgently needed repairs, with Labour MP Chris Bryant, who sat on the 2016 committee, noting, "We have taken far too long already putting our fire safety measures in place… Parts of the palace are as old as Notre Dame, and we must make sure that every fire precaution is taken as the major work goes ahead."