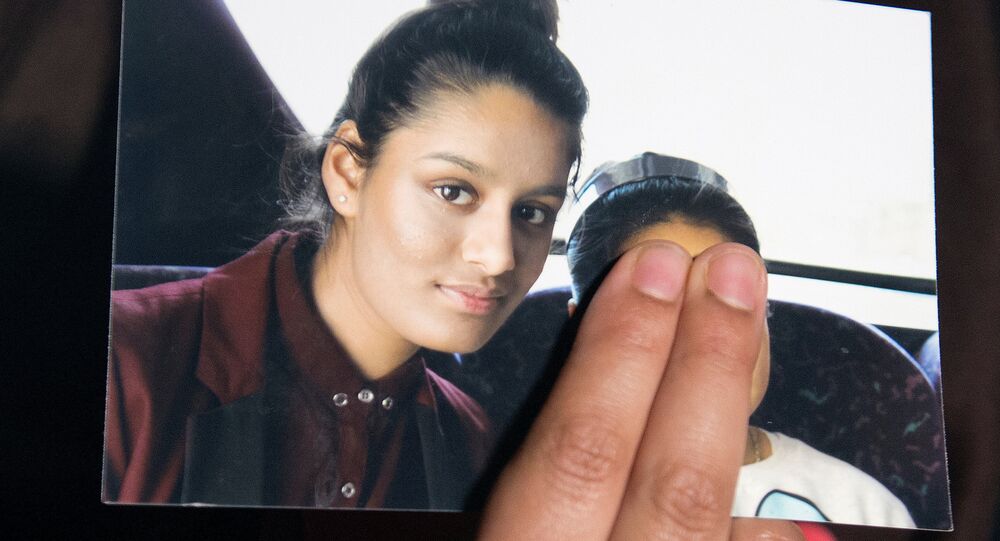 The news comes after support for Ms. Begum grew on Monday following allegations from family solicitor Tasnime Akunjee that the UK government had breached the Official Secrets Act for leaking intelligence reports to media, damaging her reputation, according to him.

UK Labour and opposition leader Jeremy Corbyn has joined the outcry of those urging the government to allow Shamima Begum to remain a citizen of the UK, adding that she had "legal rights, just like anybody else.

© AP Photo / AP Photo via militant website, File
Begum Lawyer Claims 400 Jihadis Back in UK, Prepares Taxpayer-Funded Court Bid
Mr. Corbyn added that the whole point of legal aid was that, when faced with prosecution, "you're entitled to be represented and that's a fundamental rule of law, a fundamental point in any democratic society."

But UK foreign secretary Jeremy Hunt said on Monday that he was "very uncomfortable" with the notion that Ms. Begum would receive taxpayer money to fight against the government's decision to revoke her citizenship, stating that she "knew the choices she was making" and that "we made decisions about her future based on those choices."

Mr. Akunjee, who is representing Ms. Begum's family pro bono, also said that he was acting on behalf of others in Syrian camps who had lost their nationality rights over their activities, adding that such cases would increase over time.

But Ms. Begum's case has been transferred to Birnberg Peirce, a firm applying for financial support on her behalf, but has not yet confirmed if the award had been received.

The Legal Aid Agency was "unable to comment on individual cases", according to a company spokesperson, adding that anyone applying via the Special Immigration Appeals Commission was "subject to strict eligibility tests."

Mr. Akunjee told the Guardian that Ms. Begum, 19, should be allowed to appeal the Home Secretary's decision, adding that "[Home secretary Sajid Javid] initiated a legal process and under that she's entitled to appeal."

"Legal aid enables her to fund that application with the help of solicitors," Mr. Akunjee said. "Those accused of serious crimes, such as rape, murder or terrorism, are regularly granted legal aid in the context of legal proceedings."

He also stated that he expects a legal challenge and that Ms. Begum should have a fair hearing in the UK, where she could return home.

He said he expected there to be a legal challenge, arguing that Begum should be able to return to the UK to fight the case in order to have a fair hearing.

According to Mr. Akunjee, several newspapers published stories using intelligence from the Home Office and Downing Street alleging that Ms. Begum worked alongside the Daesh morality police and helped to manufacture suicide vests.

"I would question how that has come into the public arena and whether the Official Secrets Act has been breached," Mr. Akunjee said, adding that the reports were "mere heresay" and that "the leak appears to have come from government sources".

Dal Babu, former chief superintendent of the Metropolitan police, told BBC's Radio 4 Today programme that Ms. Begum had been groomed by Daesh and should be given legal aid as a "principle of the British legal justice system".

Disclaimer: Daesh (aka ISIL or IS) is a terror group banned in a number of states.