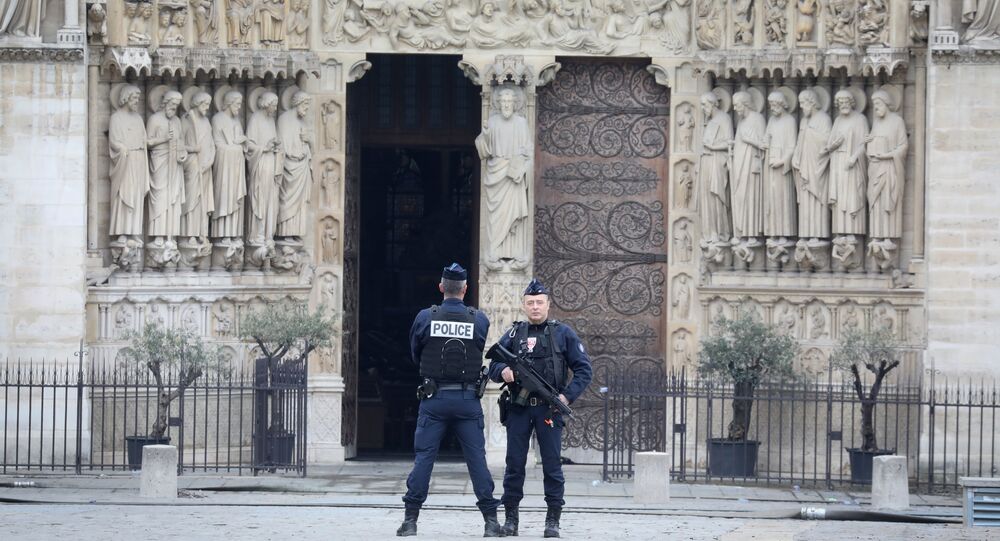 Earlier on Tuesday, Paris public prosecutor Remy Heitz said that there is no sign the 15 April Notre Dame Cathedral fire was started on purpose, adding that an accident remains the most likely cause of the blaze.

Alice Weidel, a parliamentary group leader of the right-wing Alternative for Germany (AfD) Party, has suggested a connection between the Monday blaze which seriously damaged the Notre Dame Cathedral in Paris and previous anti-Christian attacks in France.

She also tweeted that “the Observatory on Intolerance and Discrimination Against Christians in Europe speaks of a significant increase [in the attacks]”, singling out a link to a March article in a German Catholic magazine titled “Catholic churches desecrated across France”.

The tweet was published as Paris public prosecutor Remy Heitz told reporters that they are “favouring the theory of an accident” and that 50 people were working on a "long" and "complex" probe into what caused the fire at the Notre Dame Cathedral.

© AP Photo / Thibault Camus
Notre Dame Fire: SHOCK CLAIM Nostradamus Predicted the Disaster
Heitz assured that all means would be used to define the cause of the fire and confirmed that witness hearings are still in progress.

In February, the Catholic News Agency (CNA) reported that at least ten attacks against Catholic churches, including arson and desecration, had taken place in France since the start of the year.

“Vandals throughout the country have smashed statues, knocked down tabernacles, scattered or destroyed the Eucharist, burnt altar cloths and torn down crosses, among other acts of desecration of religious items”, the CNA reported.

Condemning the vandals’ actions, Olivier Ribadeau-Dumas, secretary general of the Bishops’ Conference, underscored that the desecration of a church is something more than just a common burglary.

“To open the tabernacle, to take the hosts and to profane what for us is the basis of our faith, that is to say the presence of Jesus Christ in the hosts is something that is terrible for us”, he told France Culture.