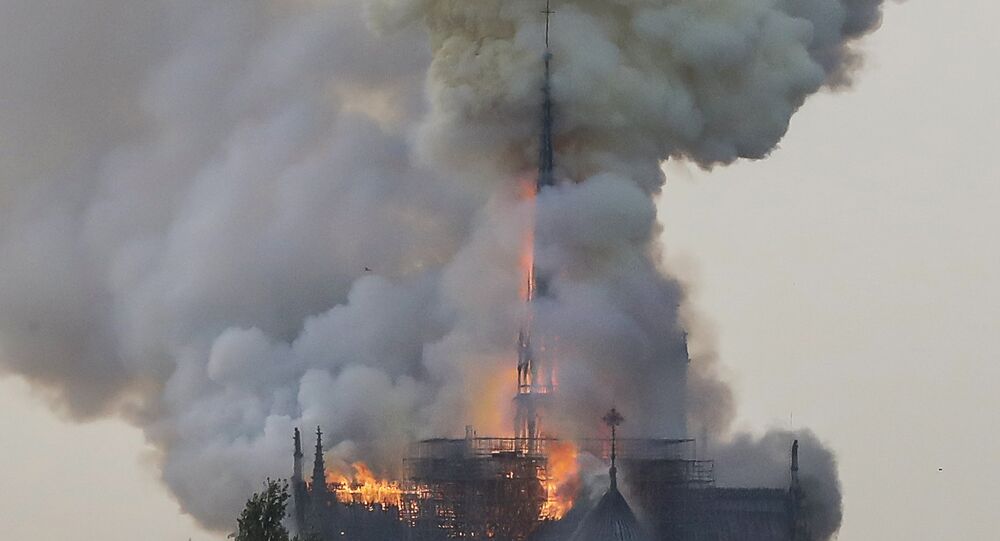 BRUSSELS (Sputnik) - European Parliament President Antonio Tajani suggested on Tuesday that the members of the EU legislature collect funds for the restoration of the Notre Dame cathedral, which was ravaged by fire on Monday.

"We are wounded to the core by what occurred yesterday in Paris…. It would take a long time for this wound to heal. We must do all that we can. One member suggested to me today that we collect funds, we will put the box outside the plenary today, [so that] we could donate what we earned today," Tajani said, opening the plenary session on Brexit.

Later in the day, Werner Hoyer, the President of the European Investment Bank (EIB) stated in his address to colleagues, obtained by Sputnik that the EIB was ready to provide any necessary help to Paris.

"We stand by France in mourning this tragedy in the heart of its capital city. We support the defiance shown by President Emmanuel Macron, who has immediately vowed that France will rebuild the cathedral in an effort reaching beyond national borders. If there is anything the bank can do to help this proud city and country recover, we offer our help and our services with open arms," Hoyer said.

European Council President Donald Tusk, for his part, expressed solidarity with the French nation in the face of the tragedy. He recalled that his native city of Gdansk was once 90-percent destroyed and burnt, but rebuilt later.

"You will also rebuild your cathedral. From Strasbourg, the French capital of the European Union, I call on all the 28 Member States to take part in this task. I know that France could do it alone, but at stake here is something more than just material help. The burning of the Notre Dame cathedral has again made us aware that we are bound by something more important and more profound than Treaties," Tusk said as quoted in the European Council's press release.

© AP Photo / Thibault Camus
Notre Dame Fire: SHOCK CLAIM Nostradamus Predicted the Disaster
A massive fire broke out at Notre Dame on Monday, causing the collapse of the cathedral's spire and the destruction of its roof structure. French President Emmanuel Macron has described the incident as a "terrible tragedy" and promised to rebuild the 850-year-old cathedral.

Soon after the tragic accident, the French heritage foundation and the US-based French Heritage Society began fund-raising campaigns to help rebuild the landmark cathedral. French billionaire Francois-Henri Pinault has, in turn, pledged in a statement to donate together with his father as much as 100 million euros (over $113 million) for the reconstruction of the cathedral.