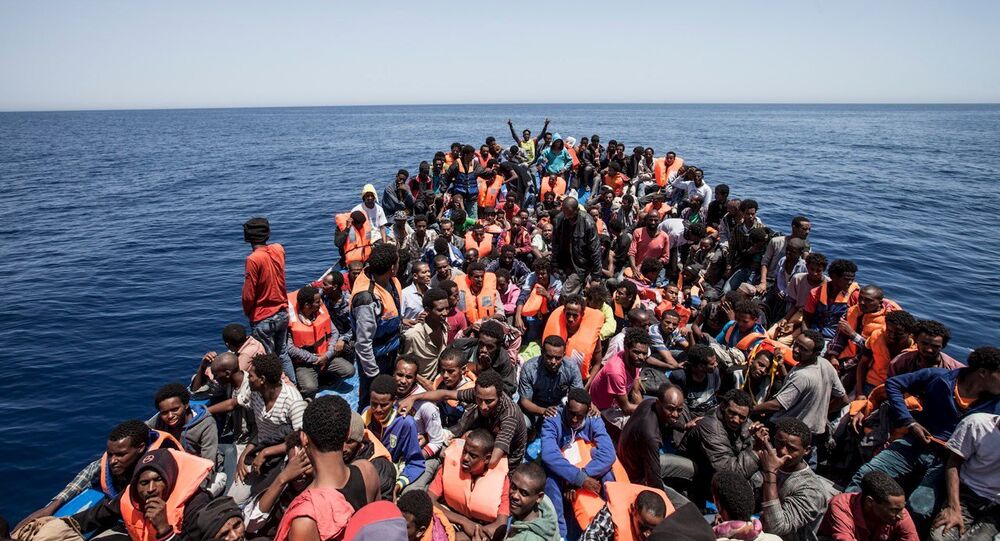 Field Marshal Khalifa Haftar, the head of Libya's National Army, loyal to the Tobruk government, has announced an offensive to take over Tripoli, where the UN-backed government is located.

Prime Minister Fayez Al-Sarraj, who is at the helm of the Tripoli-based Libyan government, has issued a warning that the flow of refugees from Libya to Europe will grow significantly if the fighting in Libya continues.

"We are facing a war of aggression that will spread its cancer throughout the Mediterranean. Italy and Europe need to be united and firm in stopping the war of aggression by Khalifa Haftar, a man who betrayed Libya and the international community," al-Sarraj said in an interview with the Italian newspaper Repubblica.

"There are not only the 800,000 migrants potentially ready to leave, there would be Libyans escaping from this war," the president noted. He added that the south of Libya had seen the resurgence of Daesh* terrorists who were ousted from the city of Sirte in late 2016.

Al-Sarraj ruled out any reconciliation talks with Haftar until he orders an end to the offensive on Tripoli and withdraws his forces. "Haftar's treacherous action will bring destruction to Libya and its neighbours; no negotiations will be possible if [Haftar's Libyan National Army] does not stop its attack on the population and if it does not withdraw," he said.

In a televised press conference on Monday, Italian Prime Minister Giuseppe Conte called for a cease-fire and expressed hope for the withdrawal of Haftar's forces. "We must avert a humanitarian crisis that could be devastating, not only for the repercussions on Italy and the EU but in the interests of the Libyan people themselves," he said.

Days before the 2011 NATO-led military intervention in Libya, which resulted in Muammar Gaddafi's overthrow and murder, Libya's veteran ruler warned that an unstable situation in Libya would lead to millions of migrants fleeing Africa and the Middle East for Europe.

His overthrow was followed by a period of transitional government and the creation of the General National Congress (GNC) in Tripoli in 2012.

The eight-year chaos in Libya saw another escalation earlier this month after Marshal Haftar, who represents the rival government in Tobruk, launched an offensive on Tripoli, prompting the local UN-backed government to announce its mobilisation for a counteroffensive.

Fayez al-Sarraj has ordered the arrest of Haftar and his allies, while the latter has accused the Government of National Accord of supporting terrorism.

Haftar's army earlier took control over the cities of Surman and Garyan, located west and south of Tripoli, respectively. According to the World Health Organisation, over 140 people have been killed and over 610 wounded since the start of fighting near Tripoli.

The 2011 civil war in Libya and the UN-authorised NATO-led military intervention, which resulted in veteran ruler Muammar Gaddafi's overthrow and murder, were followed by a period of transitional government and the creation of the General National Congress (GNC) in Tripoli in 2012.

Those politicians, who lost the election, refused to hand over power to the new parliament and continued to convene as the GNC.

The House of Representatives moved to Tobruk in August 2014 after an armed group took over the capital, and has backed a new government, formed in Tobruk.

The two rivalling governments reached a UN-backed political agreement in late 2015 and formed the Government of National Accord (GNA), which has failed to stitch the country back together. In 2016, the House of Representatives voted down the list of ministers and refused to recognise the GNA.

Despite losing approval from the Libyan House of Representatives, the GNA is still recognised by the United Nations as Libya's legitimate government.

*Daesh (aka ISIS/IS/Islamic State) is a terror group outlawed in Russia and many other countries.