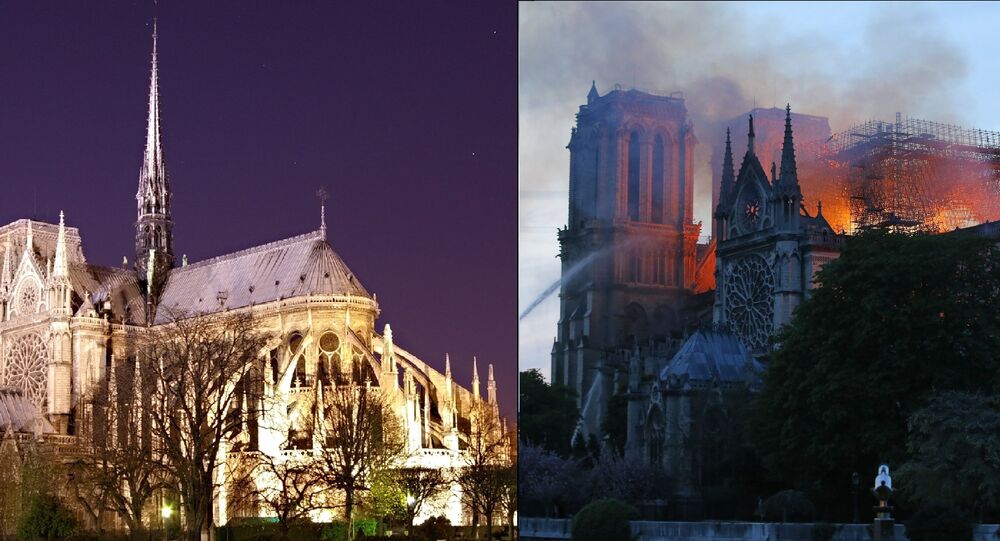 The spire and a large part of the roof of the cathedral were destroyed in the fire; however, the bell towers, the main building and most of the treasures within Notre Dame survived the heat.

According to information from French investigators, cited by The Guardian, the fire began at around 6 p.m. on Monday. An investigation has been opened by the prosecutor’s office, but police said it began accidentally and may be linked to renovation work at the iconic 850-year-old Gothic cathedral.

Some crazy photos coming out of the the aftermath of the fire #NotreDame #Fire #Paris #NotreDamedeParis pic.twitter.com/M5gLTXEnNg

The central vault just below the spire… gone. Ashes falling down the church. #NotreDame
(by: Arthur Berdah, Le Figaro) pic.twitter.com/mQ01YQvAuW

French President Emmanuel Macron arrived on the scene during the night between Monday and Tuesday and gave a speech in which he vowed that the cathedral would be rebuilt right after the firefighters confirmed that Notre Dame’s rectangular bell towers and the structure of the building had been saved. The French President noted that “the worst had been avoided” thanks to the hundreds of brave firefighters who battled for hours and who would continue working through the night. Aside from one firefighter who was severely injured, no other casualties were reported.

“Notre Dame is our history, our literature, part of our psyche, the place of all our great events, our epidemics, our wars, our liberations, the epicentre of our lives… So I solemnly say tonight: we will rebuild it together,” Macron stated, vowing to raise funds worldwide and bring the best talent from around the world to reconstruct the building.

Thousands of Parisians, many of whom were seen standing in grave silence or singing prayers, watched as vast orange flames soared from the roof for hours, threatening one of the world's greatest architectural treasures.  Sections of the cathedral were under scaffolding as part of the extensive renovations underway there, and 16 copper statues had been removed last week.

Historian Camille Pascal told French broadcaster BFMTV that "invaluable heritage" had been destroyed, adding: "Happy and unfortunate events for centuries have been marked by the bells of Notre-Dame. We can be only horrified by what we see."

“We consider the two towers of Notre Dame to have been saved,” Paris fire-service commander Jean-Claude Galler said at around 11 p.m., as firefighters were still working to contain the flames. The fire service said the fire had been reduced and it was a major accomplishment that the hundreds of firefighters had stopped the flames from spreading to the north tower belfry. However, the roof “had been ravaged”; around two-thirds of it had been destroyed. Fire brigade officers also said the structure of the cathedral was “saved and preserved” and that the fire had been successfully extinguished as the teams prepared to cool off the building.

The cathedral’s altar and altar cross were also saved from destruction in the fire.  The main loss was a 19th-century gothic spire and the wooden frame at the top of the 13th-century landmark, which was made from so many oak beams that it was known as “the forest”. A French journalist on the scene reported that the north rose stained glass window – La Rosace Nord – “seems to have held”.

the tragic fall of the spire #NotreDame pic.twitter.com/9SpLjF8l0m

Paris Mayor Anne Hidalgo said in a tweet that "the Crown of Thorns, the Tunic of Saint Louis and several other major works" had been saved from the fire, according to CNN.

France’s culture minister, Franck Riester, posted photos on social media of people loading art on to trucks. It is known for certain that one of the main treasures in the cathedral – the Crown of Thorns – was spared.

French billionaire François-Henri Pinault, the chairman and CEO of the international luxury group Kering, which owns brands like Gucci, Yves Saint Laurent, Balenciaga, and Alexander McQueen, pledged to contribute 100 million euros towards the rebuilding of Notre Dame, according to a statement.

The Fondation du Patrimonie, a private heritage foundation, has launched an international appeal to rebuild Notre Dame Cathedral, “in order for Our Lady to be reborn from her ashes”.

Call for donations to help rebuild Our Lady of Paris, Notre-Dame cathedral, after the brutal fire that has partly destroyed it. 🙏
The Fondation du patrimoine is a private organization dedicated to saving french cultural and natural heritage.
➡https://t.co/QAB3kFhsK0 pic.twitter.com/0fv4Nc3fl1

The Vatican expressed "shock and sadness", adding that it was praying for the French fire services.

German Chancellor Angela Merkel has offered her support to the people of France, calling Notre Dame a "symbol of French and European culture" while UK Prime Minister Theresa May said in a tweet: "My thoughts are with the people of France tonight and with the emergency services who are fighting the terrible blaze at Notre Dame cathedral".

US President Donald Trump said in a tweet it was "horrible to watch" the fire and suggested that "flying water tankers" could be used to extinguish the blaze. In an apparent response, the French Civil Security service said that was not an option as it might result in the collapse of the entire building.

People from all around the world also expressed their condolences after the cathedral's fire.

A dramatic loss in Architecture Art & History
PARIS — The central spire, roof and much of the interior of Notre Dame Cathedral were obliterated Monday as a catastrophic fire spread within minutes through a building that has stood at the heart of Paris for more than 800 years. pic.twitter.com/72zPz93JaP

De quel tristesse #NotreDame 😓
The workmanship, l’artisanat, les sculptures, de toute beauté. I am saddened by what is likely the loss of priceless and irreplaceable art crafted by hands long gone. pic.twitter.com/rXo6l40iWR

Some social media users also reacted to the tragedy with art of their own or by remembering the great masters of the past.

As a student of art and architecture, I first went to Paris at age 23; Paris and Notre Dame was my first destination. The artistic achievements there go far beyond religion and politics. Tragic day — My first painting of the place from many years ago.#NotreDameCathedral pic.twitter.com/aHn2vEmoJp

Today the Notre Dame caught fire. Luckily the firefighters were quick and managed to save most of the structure and alot of the artwork. I'm sad that future generations wont be able to see the original beauty but it could have been worse. pic.twitter.com/edFepcI66h

A painting I did a couple years ago titled "Sanctuary". My heart is broken. #notredame #NotreDameCathedral #NotreDameFire #art #rosewindow #illustration #Hunchback pic.twitter.com/7LY5C7wX11

You are art, and you created art. Notre Dame Cathedral Paintings.