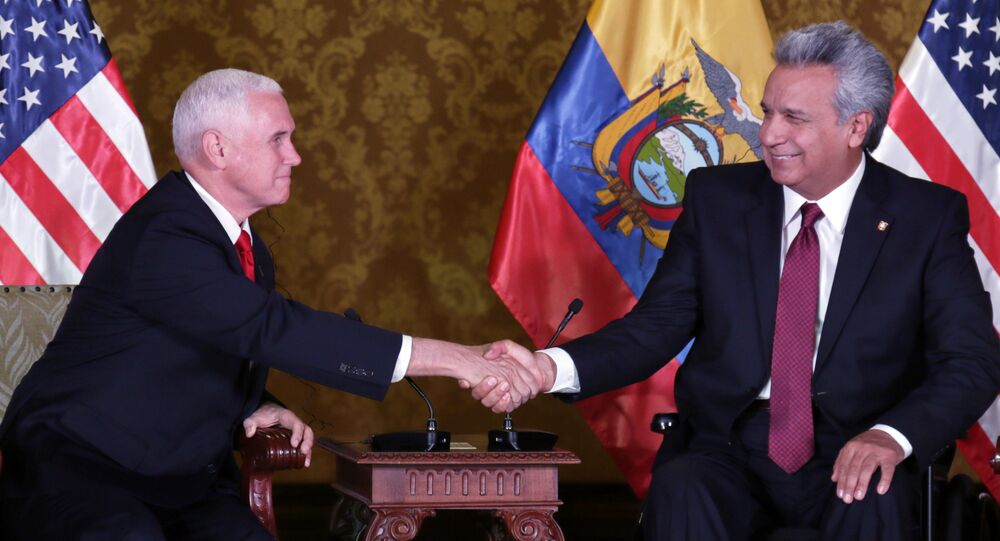 MOSCOW (Sputnik) – The decision of Ecuadorian President Lenin Moreno to halt the asylum of WikiLeaks founder Julian Assange in the Ecuadorian embassy in London and hand him over to the UK authorities had been partially motivated by benefits Moreno received in return, Ecuador’s ex-President Rafael Correa told the RT broadcaster.

"In 2018, [US Vice President] Mike Pence visited Ecuador, and he and Moreno agreed on three things. Isolate Venezuela, which Moreno did with great enthusiasm. Drop a case against Chevron, which he gladly did as well. And hand over Assange", Correa said.

The ex-president suggested that WikiLeaks’ decision to publish materials related to the so-called INA Papers leak, which sparked a corruption scandal around Moreno and his family, was "the latest straw" in the relations between Assange and Quito. Notable, WikiLeaks has noted it had not been behind the leak itself.

Screenshot/Alex Rubinstein
Dozens Rally Outside British Embassy in Washington DC Against Assange Arrest (PHOTOS, VIDEOS)
"Moreno knows that he and his family will go to prison for corruption and money laundering. So before he leaves, he wants to harm as many people as possible, including Julian Assange […] He decided to ruin another person before going to prison. He is moved by pathological hatred and in his desire to take revenge, that's why he gave out Assange to the British police", Correa argued.

The former president recalled that back in May 2017, when Paul Manafort, then the head of US President Donald Trump’s campaign, traveled to Ecuador, Moreno offered him to hand over Assange "in exchange for financial enrichment from the US".

Correa characterized Moreno’s decision to hand out Assange as selling the activist’s head to the United States, where he is likely to face death penalty.

"It was not Rafael Correa, who gave asylum to Julian Assange. It was the state of Ecuador. And the state of Ecuador had to protect the person it pledged to protect according to international law and its national pride. Instead they gave him up, allowed the British police to enter our embassy […] This is unheard of. These actions cannot leave one not outraged", Correa insisted, noting that this move violated the constitution of Ecuador.

© Sputnik / Demond Cureton
US Lawmakers Say Assange Should Be Held Responsible for Election Meddling
On Thursday, Assange was hustled out of the Ecuadorian embassy building, where he was living since 2012 in a bid to avoid being detained by the UK authorities and extradited to the United States. The activist was arrested due to a violation of bail conditions in a case, related to sexual assault crimes, which was initiated by the Swedish authorities and dropped by them back in 2017. UK law enforcement subsequently said Assange was arrested at the US request on computer offense charges.

Since coming to power 2017, Moreno has repeatedly expressed discomfort over Assange’s stay in the embassy. The president said on Thursday that his decision to terminate Assange’s asylum had been caused by alleged violation of international laws and internal protocols of stay by the activist.