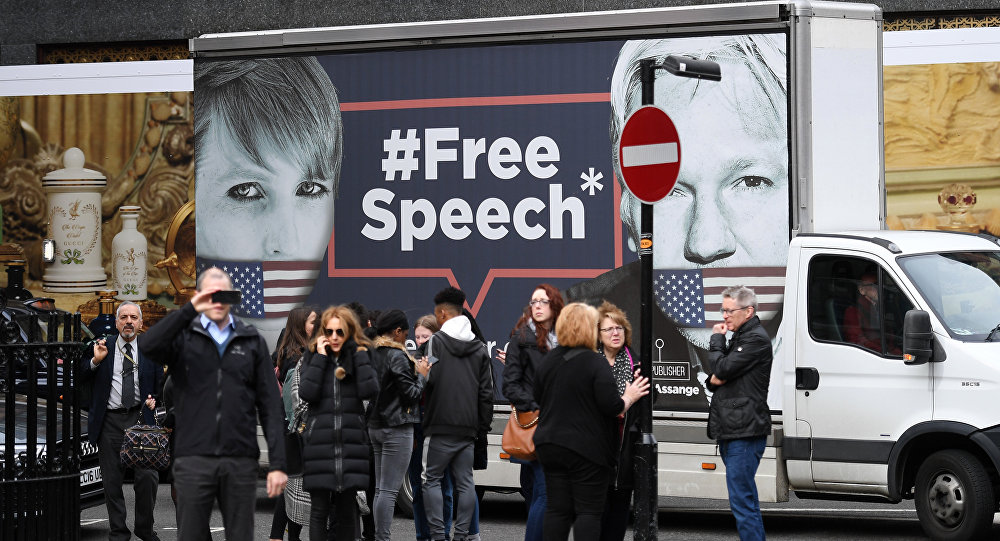 UK junior Foreign Office minister Sir Alan Duncan was asked on Thursday, 11 April, if Assange would be extradited to the United States and replied that Britain does not extradite people to countries where they could face the death penalty. But is that true and what will happen to Assange?

The Metropolitan Police said on Thursday, 11 April, Assange had been "further arrested on behalf of the United States authorities" at 10:53am after his arrival at a central London police station.

They said this was based on a warrant under Section 73 of the 2003 Extradition Act and he will appear in custody at Westminster Magistrates' Court "as soon as possible."

Sir Alan Duncan, a junior Foreign Office Minister, said he was unlikely to be extradited to the US.

Nearly 7yrs after entering the Ecuadorean Embassy, I can confirm Julian Assange is now in police custody and rightly facing justice in the UK. I would like to thank Ecuador for its cooperation & @metpoliceuk for its professionalism. No one is above the law

​"It is our broad policy in all circumstances, so it equally applies to Julian Assange, that he will not be extradited if he is going to face the death penalty. So that will apply to him," Sir Alan told Sky News.

© REUTERS / Peter Nicholls
LIVE UPDATES: Julian Assange Arrested at Ecuadorian Embassy in London After 7 Years of Asylum
It is absolutely right that Assange will face justice in the proper way in the UK. It is for the courts to decide what happens next.

But is that really the case?

In November 2001 the authorities in Texas sought to extradite Bob Kleasen, a conman who had murdered Mormon missionaries Gary Darley and Mark Fischer in Austin in 1974 but moved to the UK in 1990 after being freed on a technicality.

Kleasen's victims were cut up with a bandsaw and the case has erroneously been claimed to have been an inspiration for the film, The Texas Chainsaw Massacre.

​An extradition hearing was told Britain did not usually extradite people to countries which enforce the death penalty, but would do if it "received assurances" the individual would not be executed.

Kleasen's lawyer, James Scobie, said such guarantees were not legally binding in the US, and his client feared Texas would "dishonour those assurances".

"My life's at stake here," Kleasen told the court.

​At another hearing in December 2001 Russell Tyner, a solicitor acting on behalf of the US Government, said the decision on whether or not to extradite Kleasen was ultimately up to the then Home Secretary, David Blunkett.

Ultimately Mr Blunkett did not have to make the decision because Kleasen died of heart failure, aged 70, in April 2003 while in custody awaiting the completion of the extradition process.

But the law in the UK has been changed several times since.

First there was the Extradition Act 2003 — the legislation under which the US is now seeking to extradite Assange — and that was later amended by the Crime and Courts Act 2013 which removed the Home Secretary's ability to consider human rights issues.

This followed an independent extradition review led by Sir Scott Baker which recommended the courts were better placed to make decisions on human rights grounds.

Julian Assange did not "walk out of the embassy". The Ecuadorian ambassador invited British police into the embassy and he was immediately arrested.

​Judges in extradition cases are asked to decide "whether or not extradition breaches an individual's human rights, or whether their health makes it unjust or oppressive to extradite them."

The changes were brought in mainly as a result of complaints about a number of high profile cases which sprung from a US-UK extradition treaty.

They included the so-called Nat West Three — British bankers Giles Darby, David Bermingham and Gary Mulgrew — who were eventually extradited to the US in 2006 charges and agreed to a plea deal the following year in relation to a fraud perpetrated against Enron, which they had originally blown the whistle on in the UK.

Another case which attracted a huge amount of media attention was that of Gary McKinnon, a British computer genius who admitted hacking into US military computers while on a "moral crusade" to find classified documents about Unidentified Flying Objects (UFOs).

In October 2012, after a 10-year battle, the then Home Secretary refused to grant extradition on health grounds.

It was the war crimes that harmed America's reputation, not Wikileaks.

This is perfectly in line with the non-interventionist, America first platform Trump ran on.

​The Home Secretary's name was Theresa May.

The Baker Review looked in detail at key areas of extradition arrangements and concluded in September 2011 the UK-US treaty was fair and balanced.

"The United States/United Kingdom Treaty does not operate in an unbalanced manner…(and) there is no practical difference between the information submitted to and from the United States," it concluded.

© AP Photo / Alexandria, Va. Sheriff’s Office
This booking photo provided by the Alexandria Sheriff’s Office, in Virginia, shows Chelsea Manning. On Friday, March 8, 2019, Manning, who served years in prison for leaking one of the largest troves of classified documents in U.S. history, was sent to jail for refusing to testify before a grand jury investigating Wikileaks.

So extradition to the US remains an option for Assange, who could potentially face a charge of "aiding the enemy", a charge which has the death penalty as its maximum charge.

Chelsea Manning, the US Marine formerly known as Bradley Manning, who leaked the cables to WikiLeaks was charged with "aiding the enemy" but eventually acquitted and convicted of lesser charges.

​Four US service personnel are currently on death row in military stockades, including Nidal Hasan, from the US Army medical corps, who shot dead 13 people at Fort Hood in Texas in 2009 after shouting "Allahu Akbar."

The US Justice Department announced on Thursday that Assange was to be charged with "conspiracy to commit computer intrusion", one of the charges which Manning faced.

"If convicted, he faces a maximum penalty of five years in prison," said the US Justice Department in a statement.

But there is nothing to stop them adding the charge of "aiding the enemy" after he is extradited to the US.