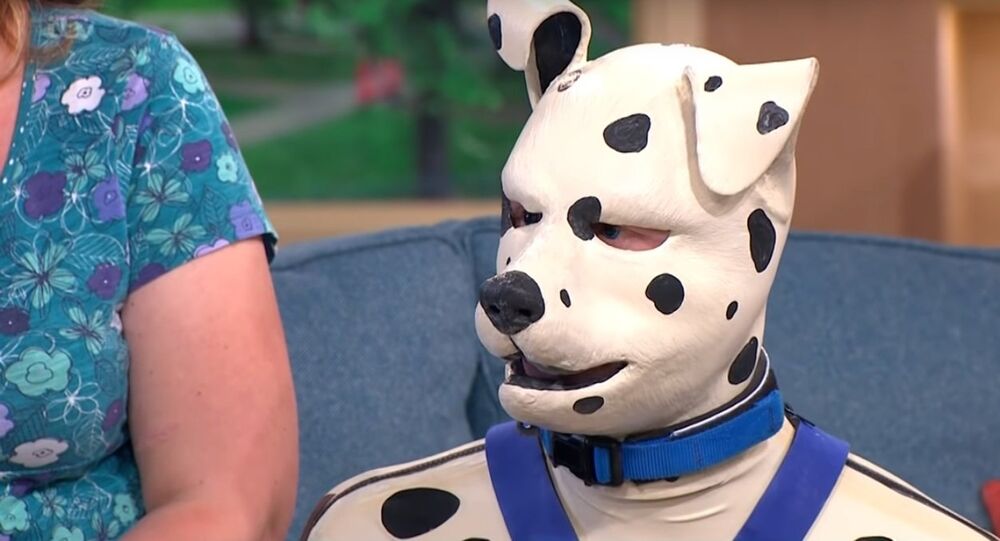 Kaz James said he never felt right as a human and it was only when he found like-minded friends in the thriving online pup play community that he started to unleash his canine personality, choosing appropriate gear to live his self-imposed, but most natural for him role to the full.

Real-life Barbie dolls, Kens and clowns seem to not be the only characters and creatures that humans may associate themselves with, since one man, 37-year-old Kaz James from Salford, Greater Manchester, has long been acting like and, most importantly, thinking about himself as a dog, the Daily Mail reported.

A “human pup” who says he has never felt like a man eats his meals out of a dog bowl, wears a dog mask, a lead, and a customised rubber suit, and on top of it, prefers to communicate by barking, licking, or, conversely, biting his acquaintances.

“I was known by my friends for hello to them by grabbing hold of the collar of their shirt in my teeth and biting or licking them, very canine-type behaviours. It was always how I was”, Kaz shared, as quoted by the British edition.

He admitted feeling really “weird” and unable to relate to others up until he finally allowed his dog personality to come forward in his teens, now taking every chance when he’s outside his work as a store manager, to live the life of a dog. He has even bought a bespoke human-size £2,000 fur suit to resemble a four-legged friend to the greatest possible extent.

“My whole lifestyle is about being a pup”, he said, adding:

“I go about and live my day-to-day life relatively normally. That includes things like putting collars on and at barking at people I know in the street”.

Kaz, who started to feel like a canine as early as age 6, says he gets a plethora of positive remarks when he’s out in all of his gear, however he uses it, first and foremost, to better express his inner animal.

He noted that he didn’t think about being a pup seriously until he met “other people like him”, who prompted him to finally start being true to himself.

“The first time I heard the term of being a pup was through a pup I met online. I then met other pups and learned a whole new language of this other world”, Kaz noted stressing it was “liberating” to know that there were other people like him.

Having become a co-founder of Kennel Club, which now helps like-minded people to unleash their true dog personality, Kaz is certain that what once was a hidden hobby and favourite state has grown to be his whole life. He has even come up with a series of helpful tips about role play in a book he authored — “How to train a human pup”.

“For me being a human pup is an all-encompassing thing. A lot of pups get into the play side of it very easily, but for me it's my whole life”, the “human dog” pointed out.

“Some parts of pup play can be really romantic, for example being collared is very romantic, it's easy to fall madly in love with someone who does all these fun things with you”, the man added speaking about his ideal way of self-expression. He is sure that living the life of a dog gives him the chance to be “the very best version of himself”.