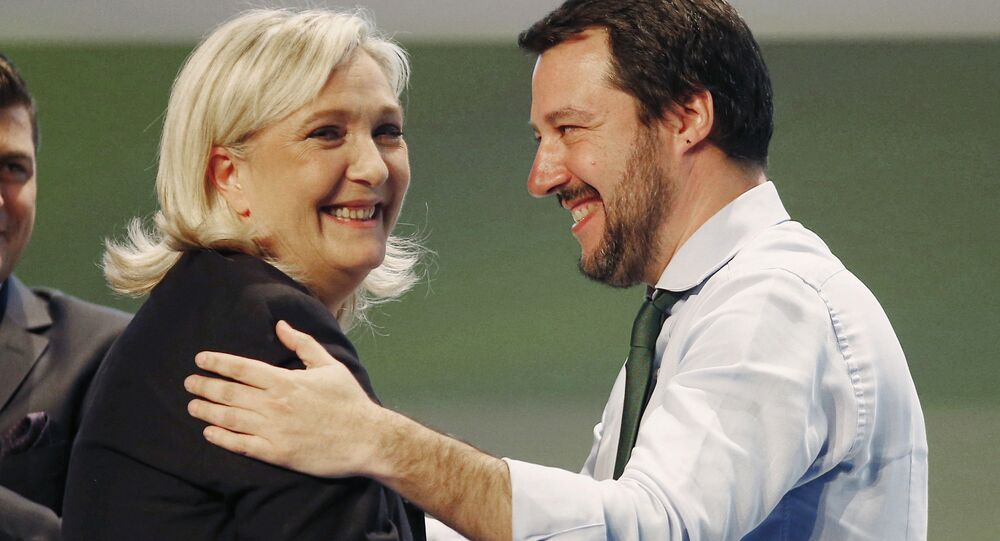 Salvini, a Eurosceptic and leader of Italy's Northern League (Lega Nord) party, has launched an ambitious plan to forge alliances with members from right-wing parties from roughly twenty countries in Europe, and is set to take place on Monday.

Italian deputy prime minister Matteo Salvini has invited conservative and right-wing parties across Europe to attend a gathering in Milan next week with the hopes of building an alliance before European elections in May.

A Northern League spokesperson said as quoted by the Guardian that "further details would be provided within the next days", with a spokesperson from the Eurosceptic Alternative for Germany (AfD) party also stating it would also send a represent to the event.

© REUTERS / Yara Nardi
EXCLUSIVE: 'My Only Purpose Is to Save Europe' – Salvini to Sputnik
But French National Front leader Marine Le Pen will be unable to attend as she is campaigning in Brittany and other parts of France for European elections, party spokesperson Alain Vizier told ANSA on Thursday.

Hungarian prime minister Viktor Orban was also "not interested", according to a source close to the Nepszava newspaper, adding that Mr. Orban did not want to break protocol from the European People's Party (EPP) and hopes to avoid expulsion before the elections, following his party's membership pause from the EPP in March.

"After the European elections, in Fidesz we'll decide what is best for Hungary: whether we should continue within the People's party or whether our place is instead in some kind of new party alliance," Orbán said in an interview in March.

Support for Northern League has grown since last summer, with the party taking Basilicata in regional elections last week. Mr. Salvini also reaffirmed his commitment to stopping migration, stating that "Perhaps this explains the hopes we attach to the Italians." His latest move to shape a European-wide alliance is to build upon his current momentum before parliamentary elections 23 to 26 May.

Several partners in EU countries were "calling me" to start cooperation, Mr. Salvini said. "The difference between us and others is that they have to go abroad to seek alliances… but the League invites European movements to Italy, our country has become central, thanks to this government."