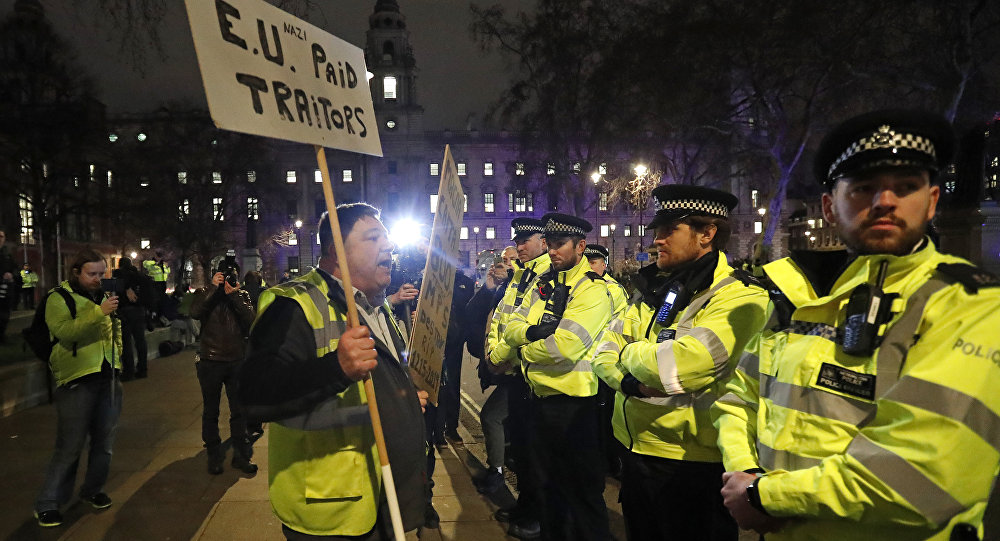 Brexit: 10,000 Riot Police on Standby to Deal With Possible No Deal Chaos

The National Police Chiefs' Council says it has prepared "for a range of scenarios" in the event of the UK leaving the European Union without a deal.

Around 10,000 police officers — the biggest ever peacetime reserve — have been put on standby to deal with unrest in the event of no deal.

The chair of the National Police Chiefs' Council, Martin Hewitt, said at a briefing on Wednesday, 3 April, that "prominent individuals" should avoid inciting trouble in a "febrile and emotive" atmosphere.

"Our planning considers what might happen and the worst case scenarios. We are not predicting these outcomes but we are preparing for them," said Mr. Hewitt.

His comments came only days after UKIP leader Gerard Batten tweeted erroneously about the police planning to deploy water cannon and adding that "some of the police may try to aggregate and provoke Brexiteers."

There are reports that water cannon may be deployed tomorrow in London, & that some of the police may try to aggregate and provoke Brexiteers. There is always the danger of provocateurs planted to cause trouble. I hope it is not true but I call on everyone present to be peaceful.

​Mr Batten was heavily criticised because the only water cannon the Metropolitan Police had ever had — purchased at great cost by the former Mayor of London Boris Johnson and never used — had been sold for scrap metal at a loss of £300,000 in November 2018.

Prime Minister Theresa May met Labour Party leader Jeremy Corbyn on Wednesday, 3 April, for "constructive" talks on finding a way out of the Brexit crisis.

But time is running out, with the UK set to leave the EU without a deal on 12 April, unless it can come up with a new deal which will satisfy all parties.

"At the moment, we have no intelligence to suggest there will be rises in crime or disorder but we are well prepared to respond to any issues that may arise," said the National Police Chiefs' Council Lead for Operations, Chief Constable Charlie Hall.

More deluded, "everything is under control nonsense"…

​The NPCC leads the UK's police planning for national events and works closely with government departments like the Home Office and agencies like the UK Border Force.

Local resilience forums have been planning for the impact of potential delays at and around ports including traffic disruption and shortages of vital commodities.

"There are strong views on EU Exit and often loud and passionate debate. There's a responsibility on us all to think carefully and be temperate in how we communicate so we don't inflame tensions," Mr Hewitt said.

"We expect to see more protests in the coming weeks but we have no intelligence to suggest that protests will be anything other than peaceful, as they have been to date," said Mr Hall.

In 2016 — only days before the Brexit referendum — Labour MP Jo Cox, a prominent Remainer, was stabbed to death in her Yorkshire constituency.

Her killer, Thomas Mair, who had links to a US-based neo-Nazi group, shouted "Britain first" before the attack.

We briefed media on our operational planning for EU exit, and have no intelligence which points to an increase in crime or disorder. Policing is prepared for any issues which may arise.

You can read more about it here: https://t.co/7Pqsa5TRVF #Brexit pic.twitter.com/CYtOkexwg3

​"The level of hate crime has reduced since the 2016 referendum and we have not seen a sustained spike in the past two months, but on average it is still higher than it was before the referendum. Police forces will be carefully monitoring tensions and hate crime," said Mr Hall.

Commander Adrian Usher, from the Metropolitan Police, said they were maintaining high levels of security on MPs.

"In recent weeks, police forces have contacted their local MPs to ensure they have appropriate, proportionate and effective security advice and security arrangements.  This is important to us because our elected representatives must be able to express themselves and go about their business without facing abuse or harassment. We will take any reports or concerns from MPs, their families of staff extremely seriously," Cmdr Usher said.