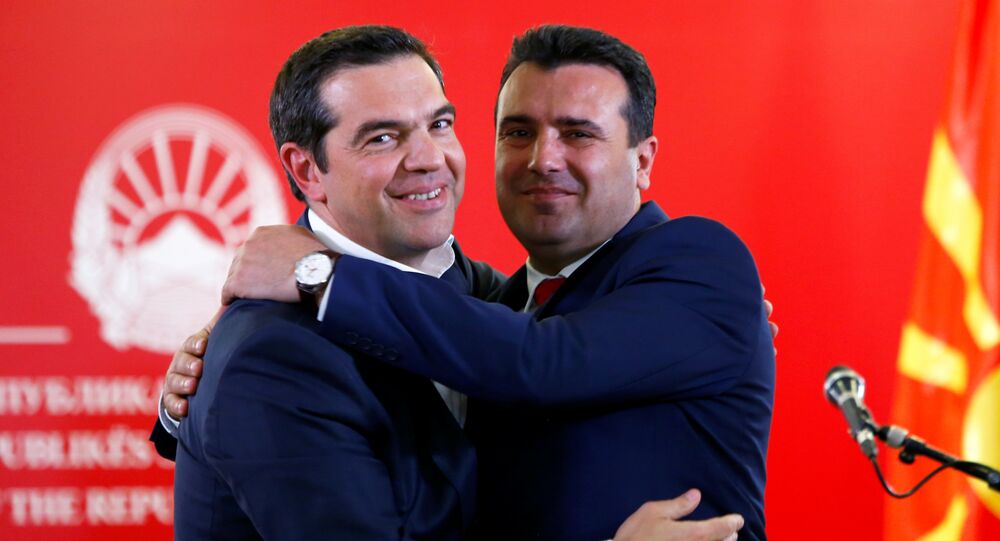 ATHENS (Sputnik) – The first meeting of the Greece-North Macedonia Supreme Cooperation Council, held in Skopje after the meeting of Greek Prime Minister Alexis Tsipras and his Macedonian counterpart, Zoran Zayev, marks the beginning of strategic cooperation between the two countries, the AMNA news agency reported.

"We are talking not only about the first official visit of the Greek prime minister to Skopje but about the first visit, which was accompanied by the establishment of a strategic partnership with North Macedonia. Thus, Greece gets another strategic ally in the region, and therefore Mr Tsipras spoke about the long-term strategic relations between the two countries", diplomatic sources told AMNA.

© REUTERS / Radovan Stoklasa
Greece, N Macedonia Establish Embassies to Replace Liaison Offices - Tsipras
According to the sources, the establishment of direct links between all ministries of the two countries will help to better control the implementation of the Prespa agreement on changing the name of Macedonia. The diplomatic sources said that during the meeting of the Supreme Cooperation Council the Greek prime minister mentioned all levels of control and monitoring of the Prespa agreement.

The parties also created a commission on schoolbooks and maps, which decided to eliminate alleged elements of Macedonian irredentism from the school curricula and include the topic of the ancient Macedonian Kingdom to the article about Ancient Greece.

Athens and Skopje have also decided to found a trademark commission in mid-May. Another body – the joint economic commission – will also monitor implementation of the Prespa agreement, with the Greek side being represented by Deputy Prime Minister and Minister of Economy Yannis Dragasakis.

On 2 March, Tsipras made his first official visit to North Macedonia amid improvement of bilateral relations after signing the 2018 Prespa deal on the latter’s name.

The Prespa deal on renaming Macedonia was signed by the two countries in June. However, the deal was met with criticism in both states. Notably, in Macedonia, the required turnout at the referendum on renaming the country was not met. Despite that, the deal was ratified by the parliaments of both countries.

The dispute, solved by the deal, concerned Greece’s own region called Macedonia. Thus, Athens opposed the use of the name by Skopje. Moreover, the dispute was the main barrier preventing Skopje from pursuing membership in the European Union and NATO.