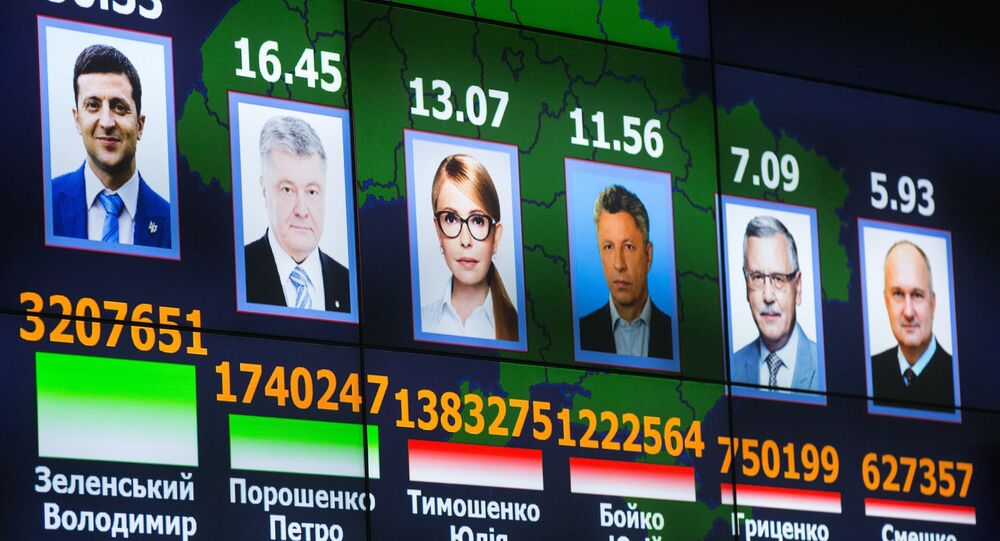 MOSCOW (Sputnik) - Kremlin believes it is yet too early to comment on the results of the Ukrainian presidential election or congratulate any of the candidates on getting into the second round of the race, Kremlin Spokesman Dmitry Peskov said Monday.

"The election in Ukraine is not over yet. There will be the second round. So, it's too early to draw conclusions. We need to wait… As long as the election is not finished, it would be wrong to congratulate [anyone] on getting into the second round," the spokesman said.

"Of course, we would like to see that Ukraine is governed by a party seeking a step-by-step settlement in Ukraine's southeast in accordance with the existing agreements, rather than a party of war," the spokesman added.

The Kremlin has no stand on Russian lawmakers' suggestion not to recognise the Ukrainian presidential election, Peskov said on Monday, stressing that this was the lawmakers' own initiative.

"In this case, we have no stand at all, this was the lawmakers' initiative. I would like to stress once again, that according to the constitution, this is the head of state, the president, who defines the basics of the country's foreign policy," Peskov said.

The head of the Liberal Democratic Party of Russia, Vladimir Zhirinovsky, has said that a relevant suggestion had been submitted to the Russian parliament.

© Sputnik / Stringer
DPR Official Doubts Minsk Talks Will Progress If Zelenskiy is Ukraine President
The Kremlin closely follows statements made by Ukrainian presidential candidates in relation to Russia and the breakaway Donbass region, located in the east of Ukraine, Peskov said.

Peskov also stressed that Russia had not occupied the Crimean peninsula either de jure or de facto, as he was commenting on a related statement by Ukrainian presidential candidate comedian Volodymyr Zelenskiy, who is currently leading with over 30 percent of votes, after over 70 percent of ballots were counted.

"As for mentioning Crimea in this context, we consider this inadmissible, since the topic of Crimea is not subject to discussion at all. This topic has been closed once and for all. Moreover, such words as 'occupation' or 'annexation' are absolutely non-applicable either de jure or de facto in relation to Crimea. Everything that happened in Crimea was done in strict compliance both with the Ukrainian legislation and the international law," Peskov said.

© AFP 2021 / Aleksey FILIPPOV
DPR: Ukrainian Security Forces Impede Polls Access for Anti-Poroshenko Voters
He added that Moscow was ready to explain to everyone that it did not occupy any of Ukrainian territories.

Crimea rejoined Russia on March 18, 2014, after 97 percent of those participating in a regional referendum voted for the reunification. Ukraine and the majority of Western countries continue to consider Crimea as a Ukrainian territory, accusing Russia of illegally annexing it.

Ukraine held its presidential election on Sunday. Comedian Volodymyr Zelenskiy is leading with over 30 percent of the votes, while the incumbent president of Ukraine, Petro Poroshenko, is ranking second with 16.19 percent after over 70 percent of the ballots were counted. The second round is expected to take place if no candidate secures the 50 percent majority.