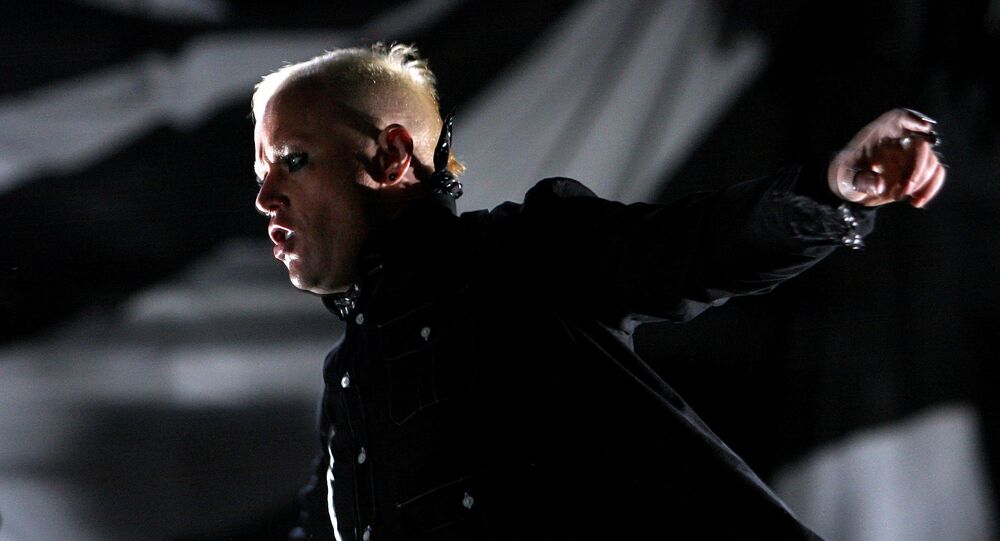 MOSCOW (Sputnik) - Hundreds of people from across the world lined the streets of the UK town of Braintree in Essex to pay their final respects to The Prodigy lead vocalist, Keith Flint, who was found dead on 4 March, local media have reported.

The funeral took place on Friday, the Daily Mail reported. The band encouraged fans to attend the procession and "raise the roof for Keef". Music of metal group System of a Down was played as the procession went to the St. Mary's Church in Bocking, where the private service took place.

Want to know what Keith Flint meant to people? These are the scenes at his funeral in Braintree. pic.twitter.com/1xeTuRhLca

Videos and photos of the procession, published by various UK media outlet, showed hundreds of fans waving flags, dancing and singing to celebrate the life of Flint.

People raving on the streets of Braintree in celebration of Keith Flint 🙏 pic.twitter.com/c4RIqc7wZ3

© AP Photo / Axel Seidemann
Prodigy Frontman Dies at Age of 49, Band Says it Was Suicide
According to media reports, local schools were closed as of 03:00 p.m. (15:00 GMT) on Friday for the "raise the roof" campaign.

Flint was found dead at the age of 49 in his home in Essex. The Prodigy co-founder, Liam Howlett, subsequently said Flint had committed suicide. Apart from a music career, he owned and managed a motorcycle racing team. In 2014, Flint also bought and renovated a pub in the village of Pleshey in Essex. Flint did vocals on the group's two number one singles, Firestarter and Breathe.

In July, the band was scheduled to perform at Park Live fest in Moscow's Gorky Park.

Prodigy Frontman Dies at Age of 49, Band Says it Was Suicide