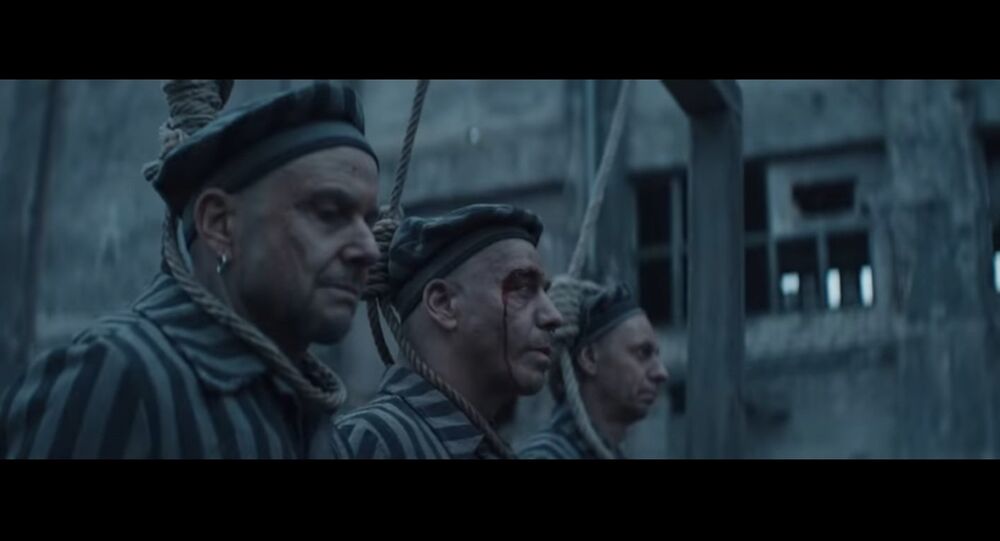 The heavy metal stars from Germany have sparked debate by posting a short clip that pictures them standing on a gallows in death camp inmate uniforms with yellow stars on them. The video prompted criticism from a government watchdog and earned Rammstein an invitation to a former Nazi concentration camp.

President of the German Central Council of Jews Josef Schuster has warned against commercially exploiting the Holocaust after the rock musicians from Rammstein posted a video with allusions to Nazi concentration camps and the suffering of their prisoners. The teaser for a new music video, which appeared several days ago, features four band members wearing what appear to be camp inmate uniforms with yellow stars and standing on the gallows. It cuts to a shot with the word “Germany” in Gothic font and the date 28.3.2019 in Roman numerals.

"Anyone who abuses the Holocaust for marketing purposes is reprehensible and immoral", Schuster said, as cited by the German outlet Zeit.

The German Central Council of Jews' former president, Charlotte Knobloch, told Bild that “the band has crossed a line”, slamming the exploitation and trivialisation of the Holocaust as irresponsible.

In his turn, the anti-Semitism commissioner of the German government, Felix Klein, said that there was nothing wrong about an artistic exploration of the Holocaust. However, he noted that if the video was made for provocative and promotional purposes only, in order to trigger a scandal and attract attention, then it has crossed a red line. He branded it a “tasteless exploitation of artistic freedom”. Klein also pointed out that one should wait and study the band’s new album, saying that if its songs are against hatred, he would be pleasantly surprised.

While Rammstein has not commented on the matter, head of the Bavarian Memorials Foundation Karl Freller has invited them to the Dachau Concentration Camp Memorial Site. He refrained from making a final judgment, as the story behind the music video was still unclear. But he noted that the suffering and inhumanity of the Holocaust does not allow it to be exploited for advertising purposes or turning it into a show to introduce products of any kind. The album is slated to see the light of day in April, before the band starts a stadium tour, according to the British outlet New Musical Express.

This “ Rammstein “ clip, using the Holocaust for advertisement purposes, is shameful and uncalled for. We join the many voices calling for its immediate removal. @IsraelinGermany @GermanyDiplo pic.twitter.com/ZytGEPYi7T

​However, others simply trashed the artistic value of the clip