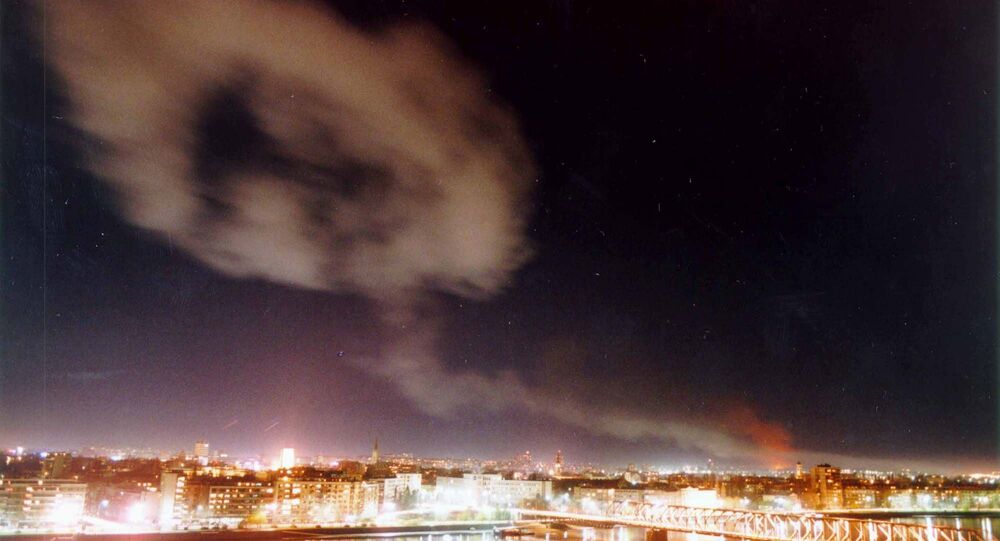 In 1999, NATO forces shed the blood of Yugoslav civilians, who became “collateral damage” in the Alliance's so-called fight for democracy. They did this with the aid of radioactive ammunition and cluster bombs, while not refraining from strikes on chemical plants and oil refineries, despite the risk of an environmental disaster.

During the bombings, according to the Serbian Ministry of Defence, about 25,000 tonnes of shells were dropped on Yugoslavia, 15 tonnes of which were depleted uranium ammunition. A significant number of bombs targeted civilian structures, as a result of which civilian casualty numbers reached, according to various sources, 2,500 people, including women and children.

Twenty years after the start of the NATO operation against the Federal Republic of Yugoslavia, which was not authorised by the UN, Sputnik has spoken to three Serbian experts, direct participants and eyewitnesses to the events, about those dreadful 78 days and their consequences for Serbia today.

Self-proclaimed Republic of Kosovo Could've Had Different Borders, if Not For Serb Resistance in 1999

© AP Photo / Slobodan Miljevic
1999 NATO Bombing Inevitable Given Eastward Expansion Plans - Ex-Yugoslav Minister
Colonel Ljubinko Djurkovic was the commander of the Košare border post (Battle of Košare- Fierce fighting on the border with Albania lasted two months from 9 April 1999 until the very end of the bombing between the Yugoslav military and the Kosovo Liberation Army [KLA], who were supported by Albania's Army and NATO forces- Sputnik) told Sputnik that thanks to the courage of those who took part in the "Košare hell", it was possible to prevent the Alliance's intervention on the ground.

He noted that members of the terrorist Kosovo Liberation Army fought against the Serbs in Košare, but they fought under the disciplined command of NATO. According to Djurkovic, in terms of personnel on the Albanian border, the ratio of forces was 1 to 15 in favour of the enemy, while in terms of technical support and armaments it was 1 to 600, taking into account NATO aviation.

"This was an organised NATO attack on Yugoslavia (FRY), this was a terrorist attack because the Alliance ignored international law and committed a real crime", Colonel Djurkovic said. He believes that, if it wasn't for the battle and defence of Košare, today the self-proclaimed Republic of Kosovo would have more extensive borders, and NATO troops (personnel) would be "drinking coffee in Belgrade".

Talking to Sputnik Djurkovic recalled the victims of the Battle of Košare: 108 killed, another 11 soldiers died in 1998 during a confrontation with terrorists who were trying to deliver weapons and equipment to the KLA from Albania; 265 wounded, many of whom were left disabled; 33 members of the "Košare hell" later on died from cancer.

The head of a Parliamentary Commission investigating the effects of the bombings, Darko Laketic, spoke about his team's early findings. According to him, the commission has focused on studying the frequency of oncological diseases in children aged 1 to 18, since children are most sensitive to the harmful effects on the environment.

READ MORE: No One Doubts NATO Bombing of Yugoslavia Was Violation of Law — Russian Envoy

All these children were born after depleted uranium ammunition was used in the bombing and had to face its effects on the body from birth. Studies have shown that children under the age of 4 have a higher chance of being diagnosed with neuroectodermal tumors, from the age of 5 to 9 — oncological blood diseases, and from 10 to 14 years old — malignant brain tumors, and from 15 to 18 years old — full-blown cancer.

© Sputnik
NATO Bombing of Yugoslavia: History of the Conflict
Laketic said that his Commission had been formed less than a year ago and it used methodology created by an Italian Parliamentary Commission that investigated the rise of oncological diagnoses among Italian soldiers who were part of KFOR (Kosovo Force — NATO-led international peacekeeping force in Kosovo).

At the same time, he told Sputnik that depleted uranium, which was used in bombings on 117 targets in Serbia, is not the only risk factor that the country's population has had to deal with since the bombings:

"During this period, among other things, we experienced an environmental catastrophe".

Poisonous Chlorine in The Air, Hydrochloric Acid in Water and Other Gifts of The "Humanitarian Action"

Avram Izrael, who was the head of the Public Alert Centre during NATO's war, agrees with Laketic: NATO forces bombed chemical plants and oil refineries. According to him, the most dangerous for the environment and in terms of possible health risks were air strikes on rocket fuel storage in the Lipovačka Forest (Lipovačka šuma), the oil refinery and the petrochemical plant in Pančevo, and the Prva Iskra plant in Baric that produced explosives.

"After the bombing of the Pančevo petrochemical plant, Serbia was on the brink of disaster. There was a large reservoir of vinyl chloride (the substance is flammable, explosive and extremely toxic — has a mutagenic, carcinogenic and teratogenic effect — Sputnik), and in order to prevent a powerful explosion, plant employees opened the valves and released the contents of the tank, the gas went out into the atmosphere, turned into microscopic, invisible to the eye plastic balls with an exceptionally long disintegration period and settled in the soil", Izrael recalled.

After the bombing of the Prva Iskra plant in Baric, according to Izrael, the contents of two storage tanks containing one hundred tonnes of hydrochloric acid spilled into the Sava River.

Memories That Torment The Soul

© AP Photo / Dimitri Messinis
German FM Believes NATO Bombing of Yugoslavia Was 'Right, Responsible Approach'
Izrael noted that coming into contact with poisonous and radioactive substances has long-lasting effects: he has been fighting cancer for 14 years, and, according to him, we must not forget that stress is also an oncogenic (carcinogenic) factor. He recalled that the Public Alert Centre during the bombings sounded the alarm 142 times in 78 days, but the hardest thing was to live through tragedies like the death of three-year-old Milica Rakic, who was killed by a fragment from a NATO shell in her own home:

"Today she would've been about 24 years old. But her life was cut short. I was very angry with myself because I could not get people to follow the rules of civil defence. Although they (NATO) called it ‘collateral damage', it can hardly console a person who has lost a child", Izrael concluded.