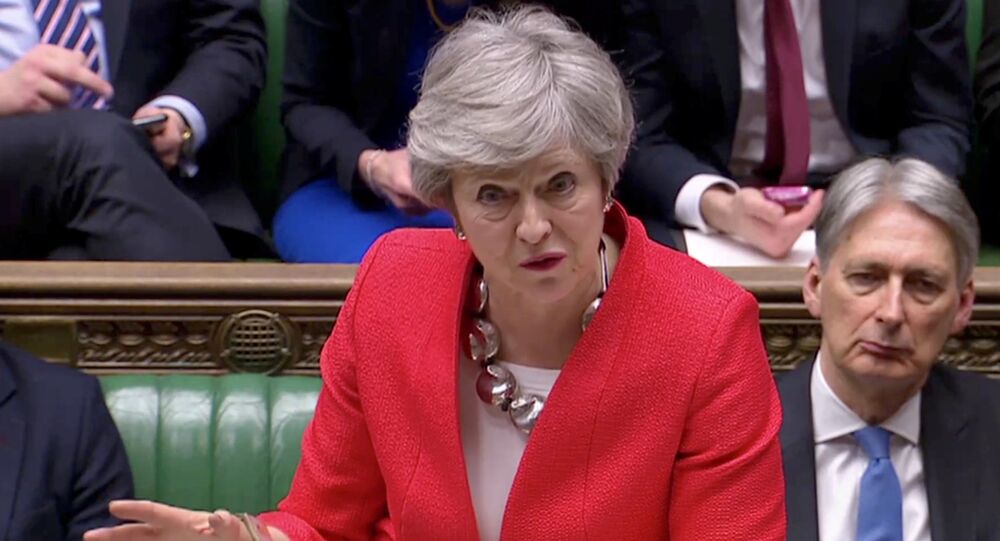 Against the backdrop of MPs grabbing control over the Brexit process, the British prime minister has reportedly resorted to some extreme measures, striving to guarantee that her brainchild, the relatively soft Brexit deal, is finally given the green light at home.

While the British government has finally agreed during their talks with Brussels to extend Article 50 of the much anticipated Withdrawal Agreement, speculation is running high on a deal that Prime Minister Theresa May has reportedly offered her colleagues: her top position in exchange for the passage of her Brexit proposal, as The Sun reported the other day.

In another move meant to counter what is considered to be May’s indecisiveness to resolve the nationwide debate with the EU on the final deal terms, MPs passed an unprecedented amendment to wrest control of the Brexit timetable away from the government and put it in the hands of the House of Commons, with an ad popping up in British media calling for May’s resignation. In the next move, British MPs will vote on Wednesday to determine the next steps in the Brexit process.

Meanwhile, opinions over May's potential resignation seem to vary, with some stating that a resignation would hardly have any effect on the passage of any deal with the EU whatsoever.

'The Best Hope of Keeping the Conservative Party Together'

“If she were to resign it would not solve the civil war within the Conservative Party. She has survived so far because she is the best hope of the Conservatives of keeping the party together”, argued Professor Rodney Shakespeare, a renowned political commentator and visiting professor of binary economics at Trisakti University in Jakarta, as well as a co-founder of the Global Justice Movement, in an interview with Sputnik.

According to the academic, if May steps down, it will further emphasise the divisions inside the party, irrespective of the upcoming government head’s political aspirations.

“Whether they have a ‘Remain’ new leader or a ‘Brexit’ new leader, either way, the divisions in the party will be accentuated if she were to resign”, Shakespeare stressed.

Andreas Bieler, professor of political economy at the School of Politics and International Relations at the University of Nottingham, echoed the aforementioned stance, saying that while  May’s resignation is “not clearly on the cards“, it would hardly help resolve the crisis in the governmental ranks:

“I am not so sure whether this would actually solve the impasse, because the kind of deal so far has been rejected twice in Parliament”, adding that all the new head of government could do is essentially stick to the same, already prepared deal and seek its passage:

“It is still the same deal and all that the new prime minister could do then would — then once the deal is passed – [is] negotiate the future relationship with the European Union”, Bieler noted, going on to assume, though, that there are indicators that “May is not going to stay on for long after the deal has been passed”.

Pondering on the potential candidates for the post, Bieler agreed that May has been quite resilient, having remarkably survived a vote of no confidence and a lot of other pressure from her own party and the opposing camps, adding that this might have occurred due to division among the Conservative Party’s ranks.

“And it is not quite clear who could be the next Conservative prime minister, who would certainly bring the party together. So, there are a couple of names in play: David Lidington and her deputy, but he is more a Remainer”, Bieler remarked, stressing that the candidates “may not be palatable to people from the ERG, these hard Brexiteer groups”. This could also be the reason why “she has been able to hang in there for so long”, the academic summed up.

'She Doesn't Seem to Be Close to Resignation'

Theresa May’s marked resilience has also been brought up by Dr Nikos Skoutaris, an expert in conflict resolution and European Union law at the University of East Anglia. In an interview with Sputnik, he recalled multiple occasions in which May’s political position as prime minister was really shaky, noting that in each separate case, she managed to stay strong, which will probably be the case this time, as well.

“So I would take that news [resignation rumours] with a bit of salt, given that she doesn’t seem that she is quite close to actually resign”, Skoutaris pointed out, going on to ponder on the point made by May’s ministers:

“…one also has to wonder whether their reservations, their doubts, their vetoes that they have over the withdrawal agreement, is over principles, or over their personal ambition to get the highest position in the land”.

Meanwhile, according to Brian Jones, lecturer in law at the University of Dundee, May’s resignation rumours are much more substantiated this time than previous assumptions, “after her speech last week condemning MPs for not passing her Brexit agreement, which was largely seen as ill-timed and ill-mannered, and the fact that last night MPs defied a three-line whip to essentially take control of the Brexit process”.

'Imminent Date of Departure Must Be Set'

Jones remarked that the PM’s positions weren’t very strong before, but “she managed to escape either relatively unharmed or even emboldened”.

Jones is convinced that if she doesn’t, her deal is unlikely to be adopted, prompting “both ministers and backbenchers in her own party not just ask for, but demand a change.”

“There is also talk about a potential snap election if MPs tried to steer Brexit into an outcome the government did not support. If it comes to that, it is difficult to see Mrs May leading another campaign, especially after the disastrous 2017 election”, Jones remarked.

Speaking about the results that a resignation pledge could yield, Jones stressed that any pledge of such a kind would help.

“If she sets a date of departure, she would definitely get more members of the European Research Group, and potentially even the DUP [Democratic Unionist Party], to fall into line. The key for some holdouts is the DUP. If they don't come on board, then there's very little likelihood of her deal passing, especially after last night”, Jones described the scenario at length.

The academic also remarked it would be incorect to speak about May's impeachment, since it's impossible for the Tories to formally replace Mrs May until December 2019, citing the fact that she won a leadership challenge in December 2018, "and that secures her position, at least within the party, for one year," Jones noted, not ruling out "other pressures involved."