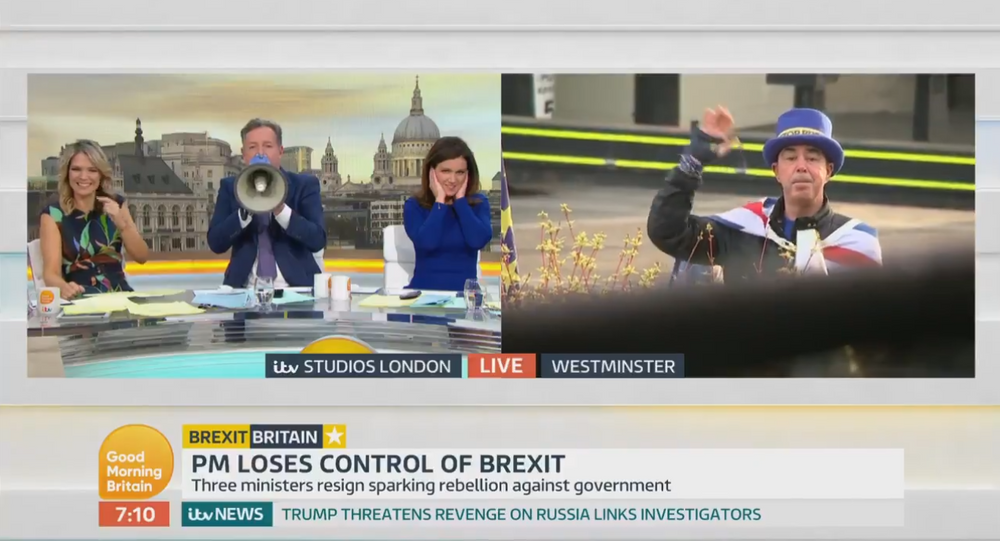 Good Morning Britain presenter Piers Morgan has taken revenge on Steve Bray, also known as Mr Stop Brexit, by using a megaphone to make him “shut up” about the UK’s long-delayed divorce from the European Union.

The Remain activist has constantly been crashing live broadcasts, including Ranvir Singh’s political segment on Good Morning Britain by repeatedly shouting over her outside Parliament, and Morgan seemingly ran out of patience.

“I’ve got a message for him. Alright Steve, shut up about Brexit! Shut up about it, nobody wants to hear from you! Be quiet about Brexit, you are not going to stop it, it’s the will of the people. Shut up! That’s it. Alright, Steve? See you don’t like it when we do it, ruining your morning. Yes you, ruining every single one of our news broadcasts. Now we are ruining yours. Mine’s bigger than yours. I have a bigger megaphone than yours Steve. Right now you are being out-megaphoned”, Morgan said to a roar of laughter from co-hosts Charlotte Hawkins and Susanna Reid.

The stunt has caused mixed reactions on social media, with many being thankful to Morgan and saying that the guy has been pretty “annoying”:

Thank you so much Piers. I work down around there and I hear him all day, he really is so annoying
You have just made my day 🤣🤣👍

well done piers, that guy does my head in, if it is the same guy doing it when sky were doing interviews yesterday, kay burley handled it badly just letting him shout constantly pic.twitter.com/bstw1TFrZT

Loved seeing this! About time someone told that man to shut up!

Absolutely brilliant, this had me in hysterics 😆😆

Others, however, voiced support for Steve and his stance towards Brexit:

Bray, who’s usually seen wearing a blue jacket and a ‘Stop Brexit’ top hat, is believed to have been holding protests outside Parliament for around two years now.

© CC0
Risk of Post-Brexit Limbo for EU Citizens, But MPs Could Just Save the Day
He’s a vocal supporter of a second referendum, which is regularly reflected by the signs he brandishes, such as “we want a peoples’ vote” and “the people want to speak again”.

The development comes as the UK-EU Brexit talks are in a stalemate since the British parliament refused to endorse the withdrawal deal negotiated by Prime Minister Theresa May. The 28-member bloc has agreed to grant London a delay to the original departure date of 29 March.

Now, the UK has until 22 May if the parliament passes the deal next week, and until 12 April in case it doesn’t. Brussels has, however, signalled that it would not reopen negotiations on the deal.