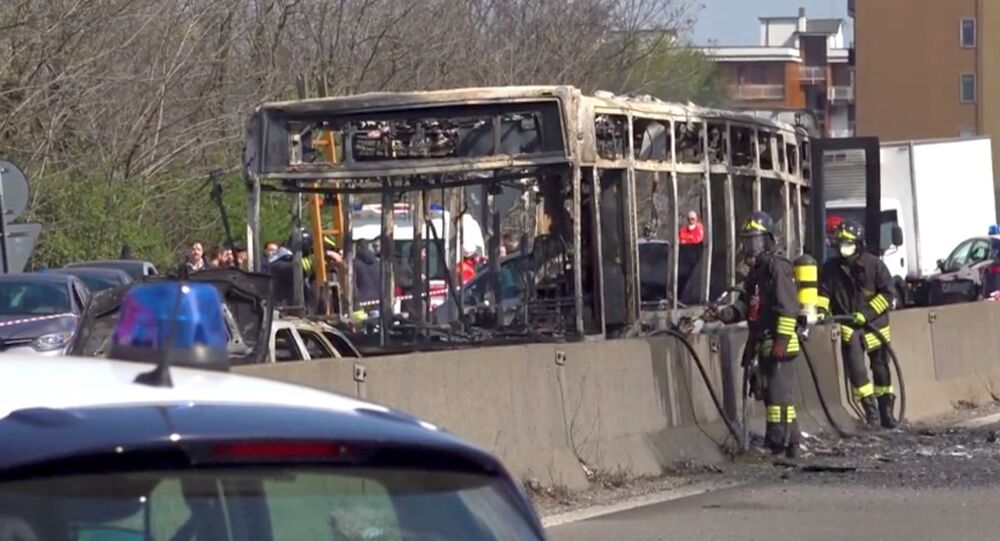 On Wednesday, an Italian bus driver of Senegalese origin was detained by police after he attempted to set a bus with 51 people, mostly children and their parents, on fire in Milan.

The driver of a school bus, who earlier tried to torch his vehicle with children inside, has claimed that he acted after hearing the voices of dead children, media reports cited his lawyer as saying on Saturday.

“I heard the voices of the children [drowned] in the sea who were telling me ‘do something spectacular for us without hurting the children’”, Ousseynou Sy told investigators.  The 47-year-old of Senegalese origin insisted that he did not want to hurt anyone.

Earlier, however, the Corriere della Sera daily cited him as saying that he wanted “to get to the runway at [Milan's] Linate airport using the children as human shields and from there head to Africa by plane”.

Sy’s remarks followed police apprehending him shortly after he hijacked a bus with 51 people, mostly children and their parents, which was en route to Crema from Milan on 20 March.

The man changed the bus' course and announced that he wanted to kill himself to “stop deaths in the Mediterranean Sea”, proceeding to threaten passengers with a knife.

© REUTERS / Yara Nardi
'Italy Cannot Host All Migrants Coming as Asylum Seekers to Europe' – Professor
One of the children reportedly managed to call their parents, who in turn called emergency services and the police, in what was followed by police officers smashing windows open and getting those on board out just as Sy set fire to the vehicle.

No one was hurt in the incident but 12 children and 2 adults were hospitalised with symptoms of smoke poisoning. Sy, who currently faces having his Italian citizenship revoked, declined to elaborate on the “deaths in the Mediterranean Sea” remarks – something that could be a nod to African and Middle Eastern migrants drowning when trying to illegally arrive in Europe by boat.

Expert Explains Reason Behind Decline in Number of Migrants to Europe