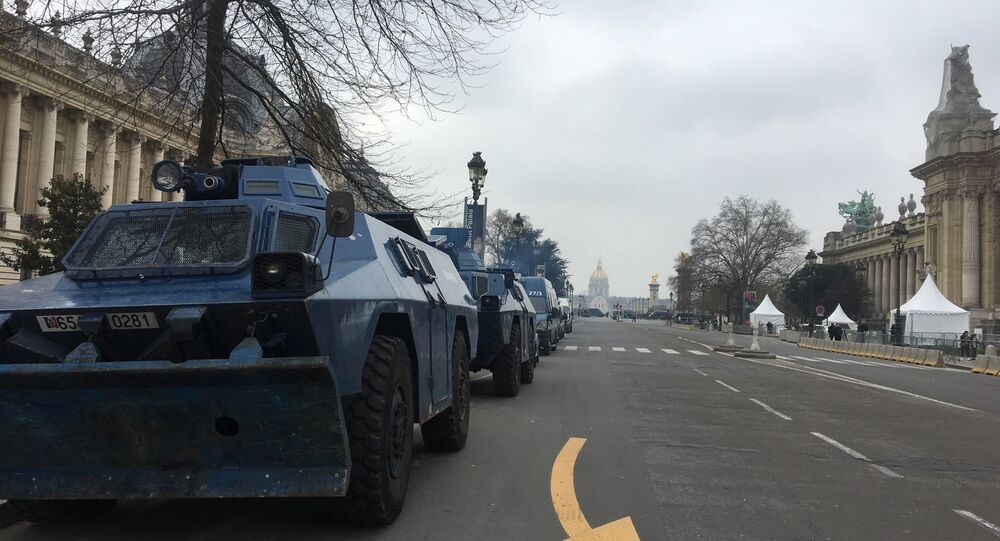 This weekend's wave of 'Yellow Vests' protests arrived in Paris on Saturday despite a ban on protesting along the Champs-Elysees, which was announced by French Prime Minister Edouard Phillippe after violence erupted last weekend.

Ahead of the 19th Saturday seeing Yellow Vests protests in France, troops have been mobilised to help the police focus on protecting public order in Paris. The military can go as far as opening fire if their life or the life of people they defend are threatened, Gen. Bruno Leray, Paris military governor, said Friday.

French police have banned protests on the Champs-Elysees and in its vicinity, which had been slated to take place this Saturday, 23 March, according to their statement. Similar precautionary measures have been taken by police in the French cities of Nice, Marseille and Metz.

A Sputnik correspondent in France is attending the protests in Paris.

The French government's spokesman, Benjamin Griveaux, announced earlier that Operation Sentinelle troops would be redeployed to protect public order at the Yellow Vest demonstrations expected on Saturday. These forces patrol streets and protect airports, train stations, places of worship and other sites; they were mobilised for anti-terrorism protection after the 2015 terrorist attacks.

© Sputnik
Damage to Insured Property During Yellow Vests Protests in France Soars to Over $220Mln
French President Emmanuel Macron stressed that the soldiers would not be engaged in keeping public order.